With its robotic arm Soloassist II for surgeons in hospitals, the German company AKTORmed from Regensburg makes it easier for surgeons to work with endoscopes. About 15 years ago, the transition from manual to robot-supported guidance of the surgical camera during minimally invasive procedures meant a significant improvement for the surgeon.

The voice-controlled version, which was presented in 2017, made its use much easier once again. However, the underlying software for speech recognition and control of the robotic arm poses comparably high requirements on the hardware in regard to the processor, memory and interfaces. While a simple microcontroller was sufficient for the version controlled by the surgeon via joystick, a Kontron motherboard, i.e. a full-featured embedded industrial computer, is used in the voice-controllable version.

More than seven million people underwent surgery in Germany in 2017, as registered by the German Federal Statistical Office (October 2018). Since the 1980s, many surgeries have been performed minimally invasive, such as the majority of the around 200,000 hernia surgeries performed on men in Germany. Minimally invasive procedures are also called "keyhole surgery". This is because the instruments and the endoscope, a miniature camera with a diameter of 5 to 10 millimeters, are directed towards the surgical area via two tiny incisions. The image is displayed on an external monitor and indicates the surgeon's surgical area. In the clinic, this means that many surgeries require the presence of a second doctor to guide the camera during surgery, in addition to the surgeon. Only in the case of very simple procedures is it sufficient for a doctor to adjust the camera himself.

The big tremor: manual endoscope guidance
In the majority of minimally invasive procedures, the endoscope is still guided completely by hand. In practice, this has substantial disadvantages, which are currently being reinforced by technological developments: High-resolution cameras produce images in 4K or even 8K quality, even 3D images are now possible. For many applications based on this, however, people lack the necessary steady hand to hold the endoscope, which weighs up to 600 grams, quietly in uncomfortable positions for minutes. Even the smallest tremulous movements are amplified by the magnified reproduction on high-resolution screens to such an extent that they make precise work more difficult than easier. In addition, movements of the entire body, for example to facilitate access to the operating table for a colleague, also set the hand holding the endoscope in motion despite all efforts. In addition, communication problems often make it difficult to work effectively and precisely with the endoscope if it is not quite clear between the surgeon and his colleague in charge of the camera how far or in which direction the camera should be moved.

Quiet in every operating position: the robot arm 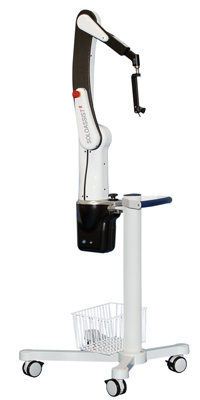 The robot arm developed by AKTORmed, which guides the endoscope, already brought considerable alleviation: It can be guided flexibly with three degrees of freedom, manually and fixed in the correct position. This means that it is possible to work with a steady image in a fixed position. The joystick also simplified the guidance, so that in some cases a second, endoscope-guiding physician could be omitted altogether. This is an advantage not to be underestimated in the light of chronic lack of surgeons in many clinics. AKTORmed's customers include hospitals and clinics all over the world. The company is a manufacture for the development and distribution of medical devices, and was founded in 2005 in Regensburg, Germany. With at present 16 co-workers, mostly engineers, electro technicians and mechatronic engineers, the robot arm SOLOASSIST is manufactured and sold, as well as new products being developed.

Reliable voice control requires high computing power
The robot arm can be used even more flexibly if it can react directly to the operator's voice commands. This allows the operating surgeon to steer the camera in the required direction with just a few simple commands and thus having both hands free for the surgery.

In contrast to the joystick, however, speech recognition and processing requires significantly more computing and memory power. The developers at AKTORmed have therefore decided to rely on an industrial PC that meets these requirements while also fulfilling the strict criteria for devices in the surgery room. In addition to the purely technical features, AKTORmed also had other reasons for choosing Kontron: Since innovation cycles in medical technology are long and procurement projects can take several years, the components of the Soloassist must have a long-term availability of at least seven to ten years. These product cycles are offered by Kontron with regard to its industrial boards. This requirement alone meant that numerous board manufacturers were eliminated at an early stage of the selection process. There was also a need to be able to access a USB bus on the board. This feature was also not available from many of Kontron's competitors, so in 2015 the decision was finally taken in favor of Kontron. AKTORmed was also convinced by the commitment of Kontron's sales partner Aaronn, who, together with Kontron, fully meets all service and support requirements.

Kontron Industrial Computer Motherboard at the heart of the system
The motherboard used is the Kontron Mini-ITX Board E38 with Intel Atom processor of the E3800 series, which has sufficient memory and numerous interfaces required for industrial applications. A bootable flash memory is available for the operating system, application data is stored via an SSD storage. Until mid-2019, after three years in clinical use, AKTORmed has not experienced a single failure of a motherboard. Not least because of this, this board differs significantly from the large range of boards for consumer products.

The high reliability also guarantees safety for the patient: The robot arm is protected against uncontrolled movements by algorithms. This guarantees that the endoscope will not injure the patient under any circumstances.

Robert Geiger, Managing Director, AKTORmed: "Availability, safety and reliability play a particularly important role in medical technology; if a component does not function as it should, this can have fatal consequences. Our decision to rely on Kontron as an experienced supplier of industrial computers was therefore absolutely the right one. The Soloassist runs reliably and error-free with Kontron's industrial computers. The configuration services provided by Kontron and its partner Aaronn allow us to fully concentrate on the development of our robotic arm. Regarding international sales, Kontron's experience on the world markets helps us to quickly pass the necessary, often complex approval procedures for medical devices. With Kontron, we also see ourselves well equipped for the future when topics such as natural language recognition or artificial intelligence for controlling our robotic arm come into play."

AKTORmed also benefits from Kontron's experience with demanding customers around the world. Since approvals for medical devices are usually complex, lengthy and different in every country, AKTORmed can already access many of the necessary certifications, such as CE, confirmations, as well as electromagnetic compatibility (EMC), electrical safety, and radio-specific requirements from the U.S. Federal Communications Commission (FCC). Long-term availability also pays off here, because if something were to change in the once approved component, a costly recertification would be necessary for the next delivery. 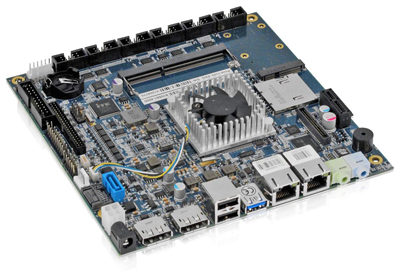 The complete voice control software for Soloassist II now runs smoothly under Windows 7 Embedded on the Kontron motherboard. Sales partner Aaronn adds its service offering to the reliable, secure and long-term available Kontron product: Boards are delivered by Aaronn to AKTORmed ready for installation. Before they are installed, Aaronn adds RAM, a fan and the SSD memory, then the software image is installed and functional tests are carried out.

Stefan Lobmeier, Product Manager Motherboards & SBC at Kontron: "Kontron specialises in industrial computers that meet the reliability, security and availability requirements of our demanding customers, especially in the healthcare sector. Together with our partner Aaronn, we are able to provide our customers with individual support and meet their specific requirements."

Kontron is also the right partner for AI control
AKTORmed is working on convincing hospitals all over the world of the advantages of the voice-controlled Soloassist II – with Kontron always present in the background. Kontron will also play a role in the further development of the robot arm. AKTORmed is already thinking about artificial intelligence applications: The endoscope could find the surgical area independently, for example an organ, and position itself. It is also conceivable that machine learning could be used to store certain surgery sequences and that the robot arm could reposition the endoscope itself.

With motherboards from Kontron, AKTORmed is well prepared for the future, and patients and doctors alike benefit from the constant advances in embedded computer technology.