Our website is made possible by displaying online advertisements to our visitors. Please consider supporting us by disabling your ad blocker.
Home > Industries > Assessing the human cost of conflict minerals
Industrial

Did you know that the minerals in your mobile phone and laptop may have direct links to child slavery in the Democratic Republic of Congo (DRC)? Karen Mascarenhas, Director of Mascarenhas PR, asks what the true cost of conflict minerals is in our day to day lives?

On the 30th June 2020, the occasion of the 60th anniversary of the independence of the Democratic Republic of Congo, it is the first time in history, that a European monarch (Belgium’s King Philippe) has expressed his “deepest regrets” to the DRC for his country’s colonial abuses.

Whilst global manufacturers are constantly striving to provide us with more and more sophisticated features at relatively competitive prices, we need to ask how this is being achieved.

The current reigning monarch of Belgium made his comments in a letter sent to President Felix Tshisekedi on the 60th anniversary of the DRC’s independence. During the terrible reign of King Leopold II, in the period between 1885 - 1908, it is estimated that as many as ten million Congolese died.

In the letter to the President of the DRC, King Philippe wrote: “I would like to express my deepest regrets for these injuries of the past, the pain of which is now revived by the discrimination still too present in our societies.”

It is this current discrimination, noted by the King Philippe, that needs to be addressed by the global – and in particular - the European electronics industry as it is from this country, the DRC, that some of the most prized and critical minerals for our mobiles and laptops (gadgets that people in the G8 or BRIC countries cannot do without), are obtained.

These minerals are sourced either from legal government controlled mines or from illegal operations, run by rebels who use enslaved labour – often children as young as eight years.

These children are taken from their homes by armed criminal gangs and are literally of no intrinsic value – other than to toil, tirelessly. At the very least, in the days of 18th century slavery, a slave had considerable monetary value and as such, the slave master did not like to endure the loss of life of his slaves. Today, in the DRC these countless children digging for tantalum, gold and other minerals could die – with no record or accountability. At present the UK and EU have little or no substantial legislation in place, unlike the US, which has the Frank Dodd legal framework, signed by President Obama in 2010.

This article aims to address the above concerns and provide some momentum towards the realisation and implementation of substantial EU legislation in 2021.

Conflict minerals are minerals mined, largely, in areas of armed conflict and appalling human rights abuses, which are then sold or traded by these armed groups who make huge profits. Often, civilians including children as young as eight, are captured and used as slave labour by criminal armed groups such as the FARDC – rogue brigades within Armed Forces of the Democratic Republic of Congo and the FDLR – Democratic Forces for the Liberation of Rwanda, whose remit is based on savage violence, kidnap, intimidation and rape - anything but democratic.

The conflict minerals are then smuggled via Rwanda and Uganda, still controlled by armed militia, to the East African coast line, where they are shipped on to Far East countries such as China, India and Malaysia, where the ores are integrated into legal minerals which are then streamlined into the electronic components manufacturing and production sites worldwide.

For decades this has been a critical problem for the DRC whose mineral wealth, ironically, is enormous, whilst its people, for the most part, live in abject poverty.

This is the metal ore from which tantalum is extracted and is used in electronics for the production of high reliability capacitors with applications in laptops, computers, mobile phones HD video and digital cameras, gaming consoles, as well as for critical aircraft requirements for jet-engine turbine blades and medical use such as surgical components, heart pace-makers and hearing aids.

Figures indicate that the DRC accounts for between 65-80% of the world’s columbite-tantalite (coltan).

This ore is used for the extraction of tungsten with its derivative, tungsten carbide, providing a very hard wearing and rugged solution for electronics design engineers – being a material of choice for the vibration mechanism in mobile phones. It is also used widely for metal wiring, electrodes and contacts within lighting applications in the electronics and electrical markets as well as in heating and welding industries.

This is the red ore from which tin is derived and traded on the London and other stock exchanges, and is used principally within the electronics industry for plating and soldering circuit boards.

Considered a rare metal, this element is a vital component within the plating process for critical use interconnection products and an important part of the chemical compounds used for semiconductor manufacturing and aerospace applications.

In addition to the reserves of 3TG, the DRC accounts for a staggering 49% of the world’s cobalt reserves, three percent of copper, with gold and diamond reserves – which remain largely unexplored.

UN guiding principles on Business and Human Rights highlight the fact that all companies have a key role to play and the US went further when the US Congress enshrined this by passing the Frank Dodd Act - legislation signed into law by President Barack Obama on 21st July 2010, which applies to all companies that report to the US Security and Exchange Commission (SEC).

On 1st January 2021 a new law will come into force across the EU – the Conflict Minerals Regulation - which will help regulate 3TG trading in Europe covering Due Diligence and Implementation. Towards helping companies adhere to guidelines, the European Commission will create a list of global smelters and refiners, who source these minerals, responsibly. 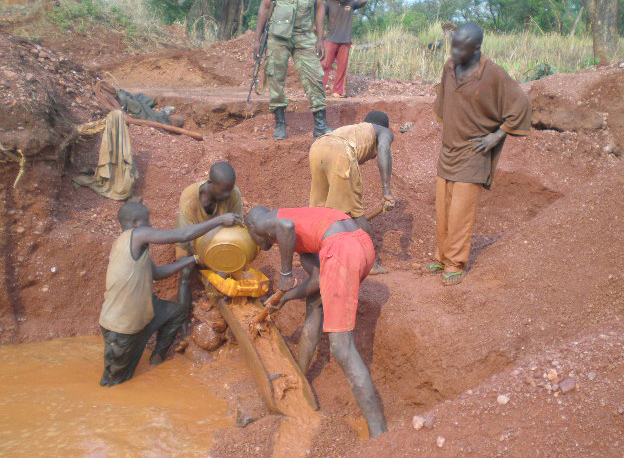 In the UK, DFID and the World Bank are co-funding a major mineral sector reform programme (PROMINES) which will improve regulation of the DRC minerals sector to improve conditions for miners.

Companies are in jeopardy of being compromised knowingly or unknowingly along the supply chain by conflict minerals. This can take place ‘upstream’ from the mine to the smelter, en route from DRC to the Far East, or ‘downstream’ from the smelter to manufacturers of electronic, aerospace, defence, automotive and medical components.

Critically, what should be recognised is the considerable sums of money involved relating to tantalum alone in the electronics sector. For just mobile phone applications where each smartphone in 2010 contained tantalum worth a mere $0.15, the sales for this element were estimated at $93m, so values of the current market can be exponentially referenced by the incredible growth of current mobile sales worldwide.

Laser Induced Breakdown Spectroscopy (LIBS) can be most effectively used to offer companies geochemical ‘fingerprinting’, which in turn allows manufacturers to track mining locations, and therefore ownership of these mines.

This research, conducted in Germany and the US, offers clear scientific evidence to help manufacturers make the correct choice.

In 2016, AVX Corporation, a supplier of tantalum capacitors announced a Solutions for Hope pilot designed to test new options for responsibly sourcing tin, tantalum and tungsten (the 3Ts) from Rwanda. Designated the 3Ts Due Diligence Options Pilot, the initiative is evaluating two new diligence options: a new cloud-based due diligence process developed by the Better Sourcing Program (BSP) employed in combination with AVX’s Geological Passporting chain of custody system.

The BSP tool utilises a proprietary phone app to enable real-time electronic monitoring, chain of custody tracking, and issues reporting, providing much faster access to data than existing systems. AVX’s Geological Passporting system determines the mineralogical, geochemical and geochronological characteristics of ore at each mine, which is expected to validate origins, reduce smuggling, and reduce the cost of due diligence processes.

Design engineers worldwide, but especially those working for the multi-billion dollar companies listed, for example, in the Enough Project, should specify conflict free minerals within their component selection instructions and bespoke designs.

Manufacturers of components using the 3TG elements need to employ procurement and supply chain management who are wholly committed to securing conflict-free minerals for their manufacturing processes with the final objective of wholly excluding conflict sourced product.

As consumers we can let our voices be heard by contacting key manufacturers via social media to create consumer demand by insisting that the mobile phone in our hands is not contaminated with 3TG, and in turn contaminated with the suffering of millions of people in the DRC or other parts of the mining community.

In the US various universities are helping to comply by sourcing computers that come with conflict-free mineral guarantees.

After all, in terms of economies of scale, in order to abolish the slave trade in previous centuries, it was far more costly to Western Europe and the US (both in terms of the civil war for the latter where the US paid a heavy price to liberate slaves and the vast GDP revenues associated with

European countries that depended on sugar, coffee, tea and cotton plantations) where reform penalised the vast investments in the slave trade and required dismantling or complete restructuring of these estates with paid labour, after the Abolition of Slavery law was enacted.

Above all, as we head towards 2021, we will need to put in the effort and show courage to ensure a conflict-free environment without exploitation or the use of slave labour in the DRC and other worldwide mining communities and countries.

In the electronics, aerospace, space and defence markets, our endeavours need to be practical if we are to make this objective a reality – despite the operational and economic constraints, this may entail.