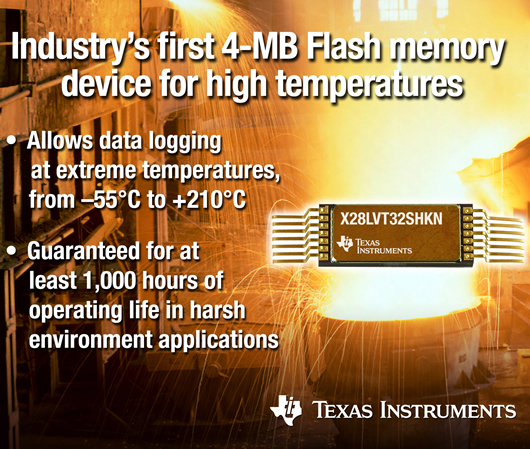 How do sensitive electronic devices survive the increasingly hostile environments experienced by downhole drilling equipment? Sally Ward-Foxton investigates in this article from ES Design magazine.
With the increased need for deeper and deeper oil and gas wells, the punishing environments that drilling electronics has to survive are also getting more extreme. The recent emphasis on HPHT (high pressure high temperature) wells has driven ambient temperatures from 150-175°C up to 200°C and beyond, while pressure in these wells can exceed 25kpsi.

“Couple the extreme temperature and pressure with the high shock and vibration encountered during a drilling operation and you can see why the downhole industry terms operations in these harsh environments ‘hostile’,” says Jeff Watson, systems applications engineer in the Industrial and Instrumentation strategic business segment at Analog Devices. Watson has previously worked as a design engineer in the downhole oil and gas instrumentation industry, and describes the environment encountered in downhole drilling of HPHT wells as one of the most severe on the planet.

“During a drilling operation electronics and sensors are used to monitor the health of the equipment downhole,” Watson says, explaining that the application can broadly be split into measurement while drilling (MWD) and logging while drilling (LWD). MWD includes such tasks as directional drilling, in which precision geosteering instrumentation guides the drill to an exact geologic target to optimise oil production. LWD includes electronics that logs data on geologic formations around the drill. “Sensors located near the bit while drilling can give us much finer resolution information than we can obtain using surface seismic techniques,” he says.

The need for reliability in these systems almost goes without saying – a failed electronics assembly on a drill string operating 10,000 feet underground can take more than a day to retrieve and replace, and the rate for operating a complex deep-water offshore rig can be more than US$500,000 (Euro 374,000) per day.

Standard silicon devices used in this environment would not last long. Watson explained that device performance can suffer tremendously from the effects of increased parasitic substrate leakage current that is characteristic of standard junction-isolated processes. Variation in device parameters (such as VT, β, and VSAT) also can degrade performance, often in unpredictable ways in complex devices.

“Remember that the performance of standard ICs is not characterised nor production tested at elevated temperature, so when using these devices beyond datasheet rating there can be significant performance variance between production lots or after an IC process change,” he adds.

At the silicon level, electromigration can also cause problems – this is the movement of metal atoms in the die interconnect, due to current flow and high temperature.

“The displacement of the metal atoms can either form voids, which can cause open-circuits, or ‘hillocks’, where the atoms pile up and can cause shorts to adjacent interconnects,” he says. “The IC designer must follow design rules to size interconnect appropriately for a given current and temperature. If the designer is not using rules that take into account HT operation it can lead to interconnect failure.”

So, how does the electronics survive these harsh temperatures and pressures to provide reliable information about downhole conditions?

Manufacturers have developed special process technologies to avoid the performance and reliability issues caused by high temperature environments. Most use proprietary variations of silicon on insulator (SOI) technology, in which a layer of SiO2 is used as a dielectric to prevent parasitic leakage into the substrate (see Figure 1).

Figure 1. During a drilling operation, electronics and sensors are used to monitor the health of the equipment downhole. The application can broadly be split into measurement while drilling (MWD) and logging while drilling (LWD).

As an example, Analog Devices’ AD8229 low noise instrumentation amplifier was designed from the ground up for operation up to 210°C. It uses the company’s proprietary bipolar SOI process and has low 1nV/√Hz input noise, 0.1μV/°C input offset voltage drift, and very high common mode rejection.

“The process is modelled above 200°C, which allowed the IC designers to manage the variation of device parameters and achieve extremely high performance operation at high temperature,” says Watson.

“Extensive silicon qualification, characterisation, and packaging all allow us to specify parts to higher temperatures. We also make modifications to several die at the mask level to enable high temperature operation,” he says.

The company recently launched the SM28VLT32-HT (see Figure 2), which it says is the industry’s first non-volatile Flash memory device for high temperature operation (up to 210°C).

Figure 2. A Junction Isolated Process vs a Silicon on Insulator Process. The black arrows show the paths for current leakage

“The SM28VLT32-HT has an operational capacity of 4Mbyte, and eliminates the need for costly up-screening and qualification testing of industrial-grade components for temperature ranges outside data sheet specifications,” says Taylor, adding that the device is intended for data logging at extreme temperatures and is guaranteed for at least 1,000 hours of operating life in the harsh environment of down hole drilling.

Of course, making sure the silicon will work at high temperatures is only half the battle. The device’s packaging and interconnects are equally as important. Standard silicon devices’ plastic packaging is not up to the job, leaving two main options: ICs supplied in ceramic packaging, or ICs supplied as ‘known-good’ bare die for incorporation into specially designed multi-chip modules (MCMs).

##IMAGE_1_L##
Figure 3. TI’s SM28VLT32-HT has an operational capacity of 4Mbyte and eliminates the need for costly up-screening and qualification testing of industrial-grade components for temperature ranges outside data sheet specifications

“Supplying known good die enables customers to build multi-chip modules to ease integration,” says Taylor. “Downhole tools are very space limited and many customers want the ability to build their own multi-chip modules with the HT functions available in die form. Some HT boards are less than one inch wide, so MCMs are essential to keep electronics as small as possible.”

High temperature specialists RF2M Microelectronics (part of API Technologies) have developed manufacturing processes that allow its MCMs to withstand the ultra high temperatures as well as shock and vibration levels found behind the drill bit. Bob Hunt, Head of Engineering at RF2M Microelectronics, explains that the company uses high performance semiconductor technologies such as Silicon on Insulator, Silicon on Sapphire, Gallium Nitride, Silicon Carbide alongside conventional silicon, which in some cases are tested at API's independent test house facility for suitability to the extended temperature requirements.

“Typical levels which are achieved are operating temperatures of -40 to 230°C, storage temperatures of -55 to 250°C, temperature cycling, shock and vibration testing at the ultra high temperatures, for each axis, and all these aspects are tested and verified onsite,” he says.

Hunt said that while standard plastic packaged silicon die with soldered terminations could be used on a PCB for downhole drilling applications, this is only good up to 150-175°C.

“These [solutions] are inherently lower reliability due to degradation of the PCB over time at temperature, corrosive out-gassing of the plastic package and intermetallic incompatibility,” he says.

Figure 4. A DC-DC converter from RF2M Microelectronics (API Technologies) developed for the oil and gas industry can operate at ambient temperatures up to 225°C

“Wherever possible within an API hermetic thick-film hybrid multi-chip-module (MCM), soldered connections are avoided,” he says. “'Clean' conductive and non-conductive materials are used to make the mechanical and electrical connections avoiding corrosive out-gassing that affects sensitive components. Where soldering is essential, we use matched ‘high melting point’ solders to ensure 250°C robust reliable connections.”
Like this Article? Register to receive updates here
You must be logged in to comment