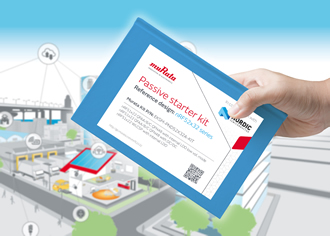 Murata has released two passive starter kits that provide reference design support for Nordic Semiconductor RFICs. The kits are equipped with the passive components needed in the RF design associated with the Nordic chips for use in Bluetooth® low energy (BLE), ANT and 2.4 GHz ultra-low power wireless applications. The inclusion of all the passive components needed in one package greatly reduces the amount of time and effort required by designers to procure sample-use components.

For use with Nordic chips type nRF51x22 and nRF52x32, Murata's passive starter kits are based on Nordic's reference designs and have received full confirmation from Nordic.

Including ceramic capacitors, inductors and crystal devices, the kits are geared toward designers of smartphone accessories, home automation products, remote controls, various sensing devices and other IoT-related products and applications.

Together with the kit, Murata also includes various compact products designed for use in suggested small-scale applications such as wearable devices.

Nordic’s nRF52 series re-defines the world of possibilities for Bluetooth® low energy sensors and devices for the IoT area. Running at 64MHz it racks up impressive stats: EEMBC Coremark score of 215 and 58 Coremark/mA.

Built in a cutting edge 55nm process technology, the nRF52 series is architected for today’s need for speed, speed to carry out increasingly complex tasks in the shortest possible time and return to sleep, conserving precious battery power. Introducing a Cortex-M4F processor at its heart, it is the most capable Bluetooth low energy SoC on the market today.

The nRF52x32 series are designed for Bluetooth low energy (BLE), ANT 2.4GHz, and NFC applications, and are ideal for sensors and devices for the IoT world. Moving forwards, Murata plans to expand its offering of BLE-support and other designer support tools geared toward the IoT market.