VR allows music artists to build their own videos 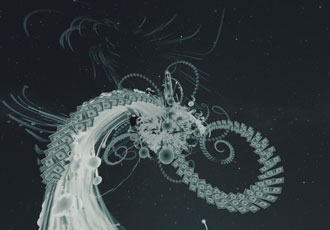 A new interactive Virtual Reality (VR) music video from Finnish, dark electronic duo, Phantom, for its popular song, LOST, has been launched in the Oculus Store. Created in Notch, the professional real time creative tool for interactive motion graphics, VR and live visuals, viewers can experience the combination of music and VR in a whole new way. This allows them to interact with and physically conduct the visuals themselves when wearing a VR headset.

The interactive music video visualises sound in VR. It uses sound to animate, with drum, bass and vocals separated to drive different visuals. Users are surrounded by the music and truly immersed in the experience.

Why is this significant?
LOST was made solely by a professional creative team; the first time this has been technically possible, without touching any code or involving developers.

Time and complexity has prevented VR technology from being used to its full potential in creative industries. Traditionally, VR tools have been designed for developers and often require coding. It can’t be underestimated how hard VR is for designers and creatives.

Notch, however, has made interactive VR and VR 360 video production accessible to this creative audience. By expanding its current feature set to enable professional artists to create their own VR experiences in real time, artists can create both interactive VR and VR 360 video within one single piece of work, switching between the two as they wish.

Who is involved?
LOST is an interactive music experience created for virtual reality. A collaboration between Phantom and pioneering designer Jani Isoranta, aka Zebracolor. Created in Notch.

Jani Isoranta, Renowned Motion Designer and the Creator of LOST, said: “This was an inspiring challenge to see how far technology can be taken. The Notch technology far surpasses others on the market, with the real time creative freedom it allows. Using Notch, it was possible to create the VR experience and also render out an 8k stereo video at the flick of a switch. Without the need to create two separate iterations.”

“LOST is a showcase of what’s really possible with VR in music. What we’ve created is so much more than a video. The duo at Phantom loved the result!”

Matt Swoboda, Director at Notch, explained: “VR truly is one of the best ways to listen to music. It makes it an experience. Notch technology has released the restrictions that creators face with interactive VR and VR 360 video - coding skills and time - enabling far greater creativity. Putting the creator back in charge of the creative.”

“We now have a whole set of tools aimed at music. VR is a key part of the feature set. With the world’s fastest VR and 360 video renderer, artists can make high quality VR in a matter of minutes. As opposed to the days or weeks that most currently spend creating such experiences.”