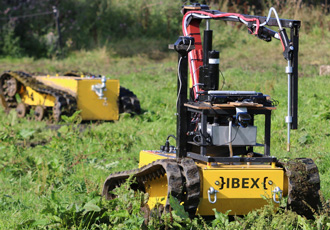 Like so many innovations, IBEX2 is driven by passion; passion in the team behind it that believes they can solve a huge perennial problem for livestock farmers - at a fraction of the cost of alternative methods. That team is made up of three individuals with a complementary set of skills; Dr Charles Fox, Pete Williams and Ed Gummow.

Pete and Ed had worked together for some years designing bomb disposal robots. Ed’s expertise is in electronics while Pete focusses on software. Keen to take their work in the direction of their choosing, and sure they could do a better job on their own, they left the safety of their employed positions.

To fund the activity, and the not insignificant cost of the components and equipment they needed, they spent their days working as consultants, and they set about developing robots, initially in Pete’s conservatory, during the evenings and weekends. Before long they had a very promising bomb disposal product that was performing well in testing and generating significant interest, and the pair moved up to an industrial unit.

However, the seed of a new idea was planted when Ed was chatting to his old university friend, Charles, and the idea for the IBEX2 farming robot was born. Despite Charles’ family having over 250 years of farming history, his interest lay in computing. “Charles turned to me and said, ‘Wouldn't it be great if we had robots to do jobs on the farm?’” said Ed. “When he was younger Charles used to traipse across his family's fields with a backpack on spraying the weeds. And he wondered if it would be possible to get a robot to do it.”

It was a great idea. It may not be obvious to those outside farming, but weeds cause real issues for livestock farmers, with reduced yields where grazing land can’t be used as it becomes overrun. On flat ground, it is relatively easy to manage, but on farms, with hilly terrain, it’s far from easy. In areas that a tractor or even a quad bike can’t access the only option is to send a human out. But even if it were economically viable to pay someone to do the work - which it isn’t - it's almost impossible to find someone willing to take on the task. It is a significant problem and one that is growing; literally.

Cost would be key
Ed, Pete and Charles quickly realised that, between them, they had the skills needed to create a robot that could do the job. It had to be capable of working autonomously - an area where Charles was an expert, and it had to be able to cope with the terrain, which was bread and butter work for Ed and Pete.

But the key to the project would be the cost. The robot had to be significantly cheaper than the £250,000 plus price of the military robots the team were used to. Its price had to be comparable to a quad vehicle if their target customers were ever going to be able to afford one. And that would be the team's biggest challenge.

The project began well, helped by a grant from Innovate UK. But cost control remained the prime focus and was a problem that could have stopped the project in its tracks on several occasions.

A key challenge was the GPS system needed for location tracking. The systems used in cars and smartphones are only accurate to around 15 metres. To position the IBEX2, Ed and the team needed to use a ‘differential’ GPS, an enhanced version that brings the accuracy to within 10cm or less. But these can cost thousands or even £10,000 plus. The IBEX2 team were lucky, though, and came across a startup developing a differential system.

By working collaboratively with the startup company, the IBEX2 team were able to access the system they needed at a much more cost effective price.

The overarching approach employed by the team was to find an off-the-shelf product that did the job needed, or as close as possible, and to adapt it if required, rather than start from scratch. This tactic proved to be the key to keeping the costs under control. This ethos was probably best demonstrated by the team's choice of wheel hubs. They bought hubs made for a Mini which cost around £30 each.

“Instead of sourcing a custom bearing, making a housing and getting it cast and machined, we bought one off-the-shelf,” said Ed. “It is designed to carry around a tonne at speeds over 100mph. We have less than one-third of that weight going 5mph, so it is rated higher than we will ever need. And it’s fully weather sealed.”

The finishing line draws near
The project is progressing well and is close to being made available for sale. Their model of working as consultants during the day, to fund the project, means dwindling finances do not pressure them. And they have not been forced into compromises as a result. “It means we can takE the time to test ideas and the final product is only going to be released when it is ready,” concluded Ed.

The IBEX2 has certainly been well received and has garnered plenty of interest from the media. Alongside coverage in trade title Farmers Weekly, the project has been covered by the BBC and the Discovery Channel. It has even been picked up by the Daily Mail who put its trademark sensationalist take on the project with references to the Terminator!

When it is finally ready, the IBEX2 has all the ingredients to make it a success. The team has developed a vehicle that can work on 45° slopes, in deep mud or on slippery grass. It can identify terrain that is too steep and back off when necessary. It can move autonomously, plan its routes and plot them on a map. And it can single out weeds from harmless plants, targeting them with an accurate spray of pesticide.

The IBEX2 has essentially been built using a modular approach, and the team are also looking at other applications for the technologies that have been combined to create the robot. Three independent elements are working together—the chassis, the autonomy and the spraying equipment. Each now has a growing list of alternative applications that the team are itching to explore. But for the time being, the focus remains squarely on bringing the IBEX2 to market for the farming sector.

Ibex Automation has worked with Breakthrough funding, a company that helps UK SMEs achieve R&D tax credits - a government scheme created to enhance and reward innovation amongst UK businesses. Could you be eligible? Click here to learn more.