When you think down to the core, sensors have become the backbone of the Internet of Things (IoT) ecosystem. With smart homes, smart grid, intelligent transportation, and even smart healthcare; this is just naming a few basic infrastructures that are crucial ingredients for the ‘connected world’ recipe. The increasing penetration of Internet of Things (IoT) across various sectors helps boost the growth of the sensor market.

According to MarketsandMarkets analysis, the overall IoT sensors market was valued at $3.34bn in 2015 and is expected to reach $38.41bn by 2022, at a significant CAGR of 42.08% between 2016 and 2022. Key factors contributing to the growth of the IoT sensors market include the development of cheaper, smarter, and smaller sensors; popularity of smart devices and wearables; need for real-time computing of applications; and surge in demand for IoT sensors in various applications.

The high demand for sensors from the building automation and transportation application is expected to drive the sensor market in the near future. Semi-autonomous and autonomous vehicles are considered to be the future of the transportation industry, and their advanced, futuristic features are creating headlines.

Sensor-based technologies help make driving safer and more efficient. Light radar (LIDAR) sensors are the main sensors embedded in autonomous vehicles. They can map the surroundings in 3D with accuracy up to centimetres and can spot anything under the range of 120m.

As per MarketsandMarkets’ analysis and forecast, the shipment of automated driving cars is expected to surpass five million units by 2025, which indicates massive demand for automotive sensors in the future. Building automation application is another growth booster for miniaturised connected sensors such as light sensors, chemical sensors, and accelerometers. With the increasing urbanisation and growing need for customer convenience and safety, automated and connected homes are increasingly gaining traction, which creates a major opportunity for low-power wireless sensor manufacturers.

Decades ago, bulky, expensive, and analogue circuit–based sensors with proprietary communication protocols were used in military and heavy industrial applications. The low volume and high cost of analogue sensors were the main constraints hindering their large-scale deployment in industries. Now, however, miniaturised, low-cost wireless sensors have entered the market. Various academic institutions and industry players are working together to provide high-volume, low-cost, and power-efficient sensors for various applications such as light industrial, transportation, and consumer electronics.

Demand for different sensors across applications: 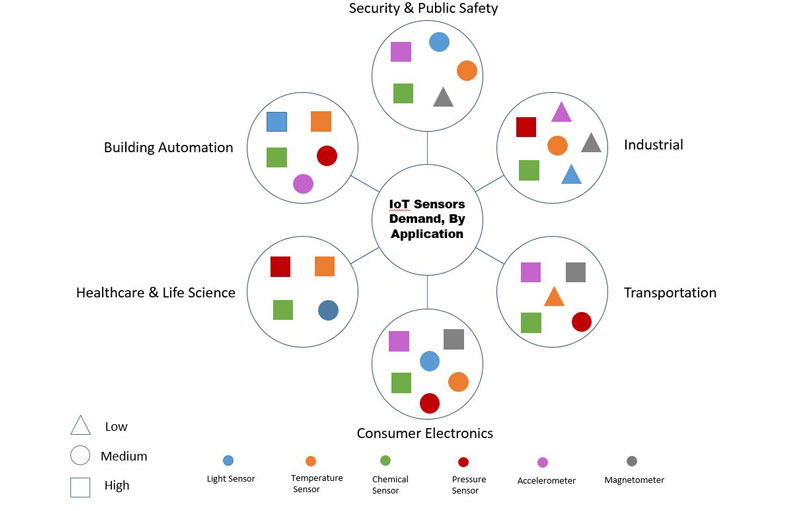 There is an increasing demand for low-power, high-density sensor arrays that can overcome problems related to high power consumption, bulky size, and high cost of sensors. This demand can be overcome to some extent by MEMS technology, which is a combination of micromachining technology, microelectronic technology, and compact packaging technology.

In this process, different 2D and 3D microsensitive elements are produced using microelectronic and micromachining technology and are then bound together in miniaturised packaging along with power supply and signal-conditioning circuits.

These MEMS-based sensors can be effectively used in applications, such as consumer electronics devices, connected home infrastructure, and industrial, which require compact and cost-effective components.

To achieve growth in the MEMS market, companies are adopting organic growth strategies, such as new product launches, and inorganic growth strategies, such as partnerships, agreements, and collaborations. A micro-power high-resolution MEMS accelerometer from Analog Devices (US), high-performance 3-axis MEMS accelerometers from Murata Manufacturing (Japan), a 6-axis inertial measurement unit (IMU) with an advanced software stack from InvenSense (US) are some of products launched by key players as part of their organic strategy.

The growing demand for technologically advanced products and the increasing demand for MEMS devices from the automotive, consumer electronics, and healthcare verticals has encouraged players to adopt the organic as well as inorganic growth strategies.

The market for sensors is expected to witness rapid growth in the future due to the demand from more complex applications in newer technologies such as augmented reality and virtual reality (AR/VR), robotics, drones, artificial intelligence, and Industry 4.0.