The automotive market has witnessed many unexpected developments over the past two years, despite its age and maturity. As has always been the case, safety drives the market. Automotive OEMs and suppliers are now investing in technologies to develop autonomous and electric vehicles. Automation will spur the development of imaging and detection sensors like cameras, LiDAR, and radar, while electrification will boost the design of current and thermal sensors for battery management.

As a result of sensors becoming a must-have, other markets are dynamic and growing too. Yole Développement (Yole), part of Yole Group of Companies, presents an overview of the different sensors involved in autonomous systems with its new report MEMS & Sensors for Automotive. It also describes the applications, technologies and players associated with the automotive sensors market’s impending changes. This analysis includes detailed roadmaps and market forecasts until 2022.

In a global automotive market worth than $2.3 trillion, the little world of automotive sensors has recently been shaken up by the emergence of electric and autonomous cars.

Despite just three percent growth in the volume of cars sold expected through to 2022, Yole expects an average growth rate in sensors sales volumes above eight percent over the next five years, and above 14% growth in sales value. This is thanks to the expanding integration of high value sensing modules like RADAR, imaging and LiDAR. The current automotive sensing market groups MEMS and classic active sensors such as pressure, TPMS , chemical, inertial, magnetic, ultrasonic, imaging, RADAR and LiDAR.

Among classical sensors like pressure, chemical and magnetic sensors, the impact of electric vehicles will remain small in the short term. However, the advent of electrical vehicles will greatly change the amount and the distribution of pressure and magnetic sensors within the car in the longer term. More electric cars will mean fewer pressure sensors and a surge in magnetic sensors for battery monitoring and various positioning and detection of moving pieces. Finally, the automotive world is experiencing one of the fastest-changing eras in its evolution ever. Sensor suppliers are now engaged in a race where they need to be prepared for the golden age of the automotive world. 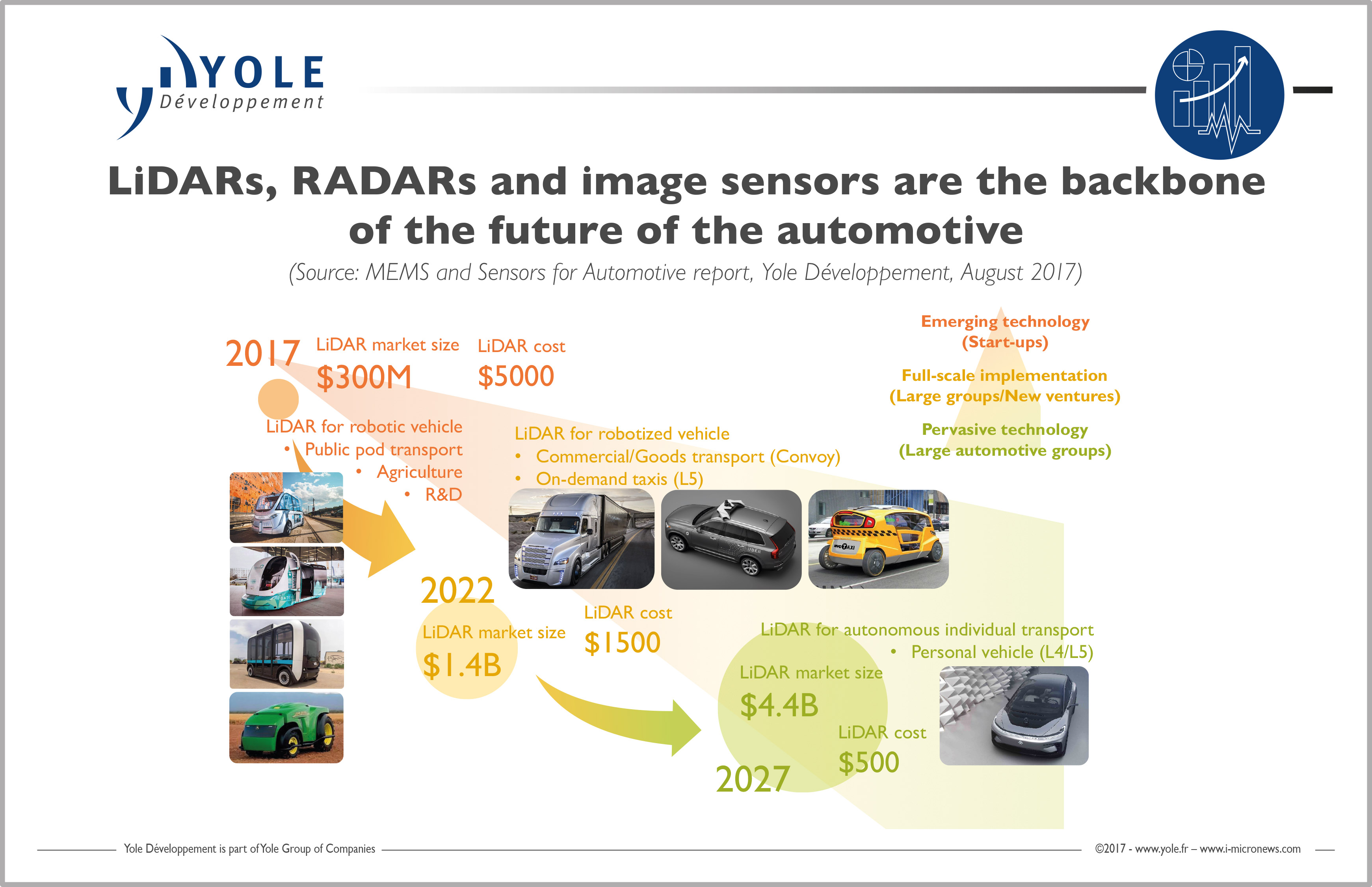 Among all sensing technologies located in the car, three main sensors will drastically change the landscape: imaging, RADAR and LiDAR sensors. Imaging sensors were initially mounted for ADAS purposes in high-end vehicles, with deep learning image analysis techniques promoting early adoption. It is now a well-established fact that vision-based AEB is possible and saves lives. Adoption of forward ADAS cameras will therefore accelerate.

Growth of imaging for automotive is also being fueled by the park assist application, and 360° surround view camera volumes are skyrocketing. While it is becoming mandatory in the US to have a rear view camera, that uptake is dwarfed by 360° surround view cameras, which enable a 'bird’s eye view' perspective. This trend is most beneficial to companies like Omnivision at sensor level and Panasonic and Valeo, which have become the main manufacturers of automotive cameras.

RADAR sensors, which are often wrongly seen as competitors of imaging and LiDAR sensors, are increasingly adopted in high-end vehicles. They are also diffusing into mid-price cars for blind spot detection and adaptive cruise control, pushing Level 2/3 features as a common experience.

Lastly, LiDAR remains the 'Holy Grail' for most automotive players, allowing 3D sensing of the environment. In this report Yole’ analysts highlight the different potential usages of this technology, which will transform the transportation industry completely.

“We expect tremendous growth of the LiDAR market within the next five years, from being worth $300m in 2017 to $4.4bn by 2022,” detailed Guillaume Girardin from Yole. LiDAR is expected to be a key technology, but sensing redundancy will still be the backbone of the automotive world where security remains the golden rule.