Passenger safety occupies a prime spot in the automobile sector today. Stakeholders across the automobile value chain acknowledge the importance of passenger/occupant safety and are constantly upgrading their offerings to provide fail safe safety technologies that will protect passengers and pedestrians. Proactive policy implementation and consumer awareness has played a key role in making automotive safety systems popular. 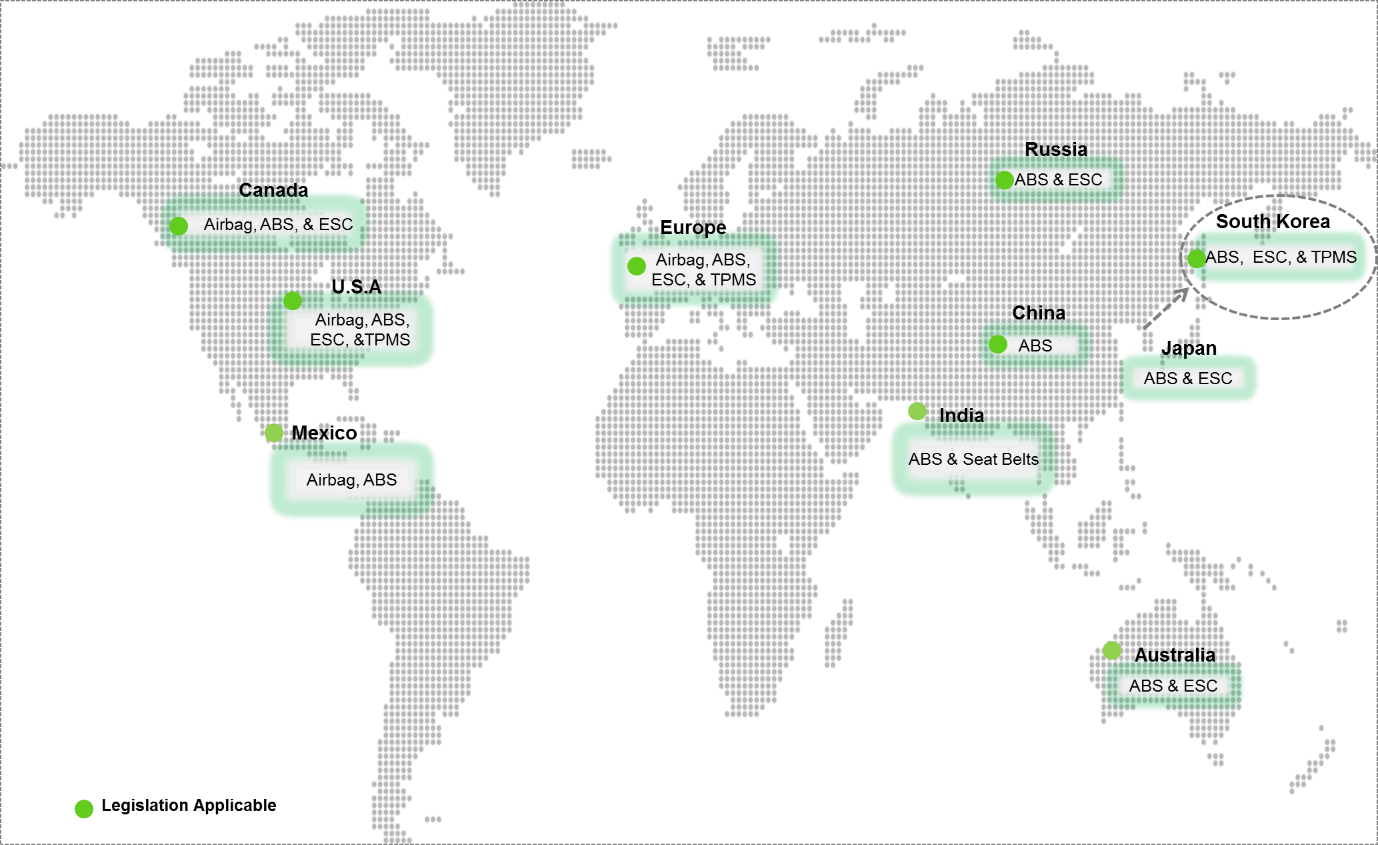 An emerging trend witnessed in the global automotive safety system market is the increasing demand from the countries like India, China, Russia and Brazil. Since the market for the safety systems like Airbags and ABS in developed economies is maturing and becoming saturated, OEMs and suppliers are focusing on increase demand from emerging markets.  The demand is becoming higher in emerging markets primarily because of the improving road safety standards/supporting legislation and consumer awareness. Rapidly increasing vehicle population in emerging markets such as China, Thailand, Brazil and India is also driving up the risk of road fatalities and supporting demand for safety systems in passenger and commercial vehicles. Further, programmes like New Car Assessment Programe (NCAP) a government car safety evaluation programme which provides ratings, based on the safety performance of cars have become a catalyst for encouraging significant safety improvements initiatives from original equipment manufacturers, that drive consumer confidence and hence demand for Active and Passive Safety Systems. 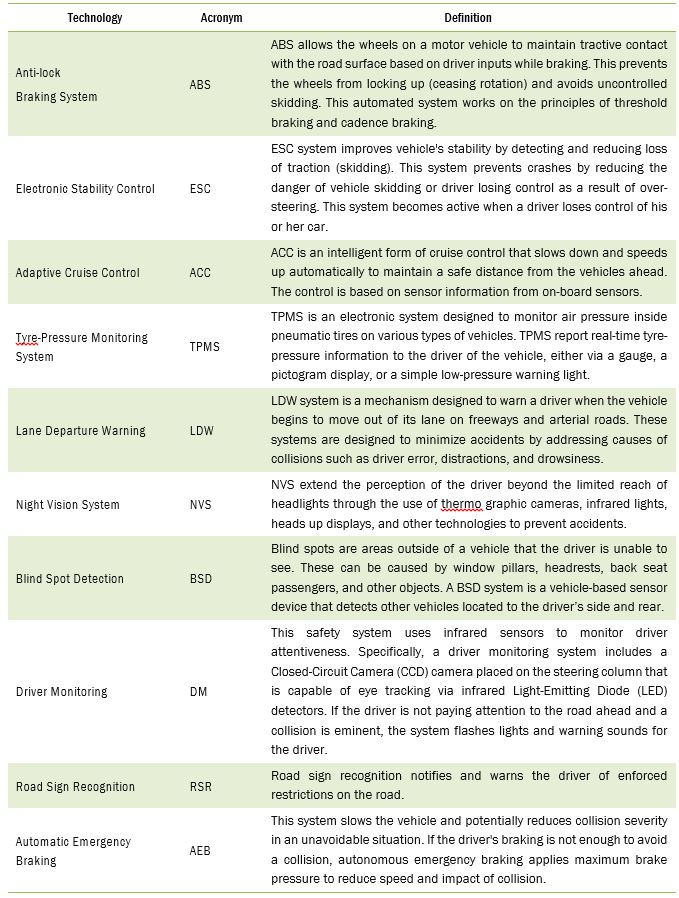 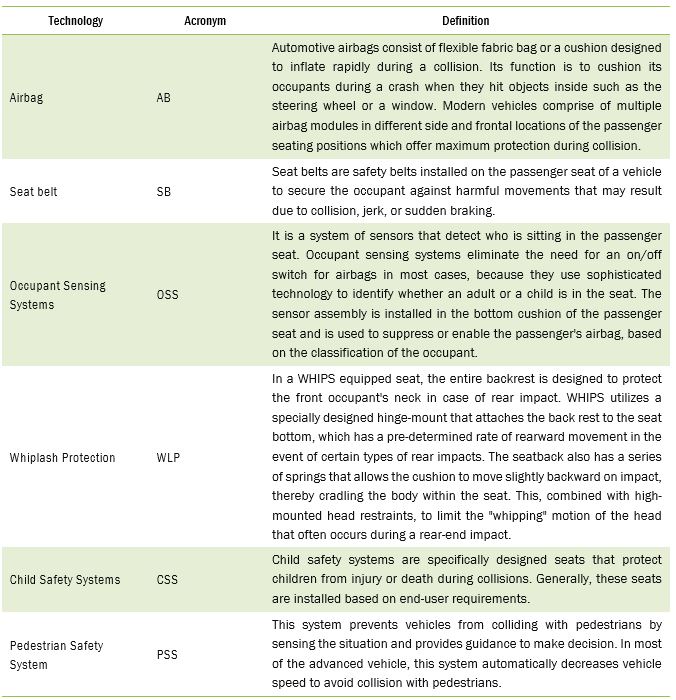 Head up display:
The automotive HUD finds application in the majority of the passenger car segments. Given the increasing adoption of HUD in the automotive sector, it has become a standard feature for various models in the luxury car segment. Additionally, the increasing demand for comfort and safety has compelled automakers to incorporate this feature in premium and mid segment models as well. The market in growing regions such as Asia-Pacific, and North America indicate promising growth potential for the automotive HUD market. The Asia-Pacific automotive market in particular presents high-growth opportunities; the region includes Japan, China, and India, with the latter two having huge production capabilities. The European HUD market is primarily driven by the growing awareness regarding driver safety and convenience. Europe has many luxury/premium car manufacturers. Major high-end car OEMs such as Audi AG (Germany), BMW (Germany), Mercedes-Benz (Germany), Bentley Motors (UK), Maserati (Italy), Ferrari (Italy), and Bugatti Automobiles (France) have their headquarters in Europe. The automotive HUD comes as standard safety feature in the majority of European automobiles. The region therefore has a wide customer base for this technology.

Windshield head up display technology and combiner head UP display technology
The windshield head up display projects a virtual image with the necessary information needed by the driver. This information is projected in accordance with the drivers eye gaze. In this technology type, the windshield of the car plays an important role as there are chances that the image produced by the device can be distorted. The conventional HUD uses TFT displays which projects images on the windscreen. With the advancement in technology there have been improvements in the display technology. One of the differentiating factors between the two types of HUDs is the space requirement and image resolution. The Combiner HUD type has a smaller screen which displays the necessary information but lacks the picture quality as compared to the other type. The Combiner HUD has an adjustable positioning system which enables the driver to adjust the screen according to their convenience. 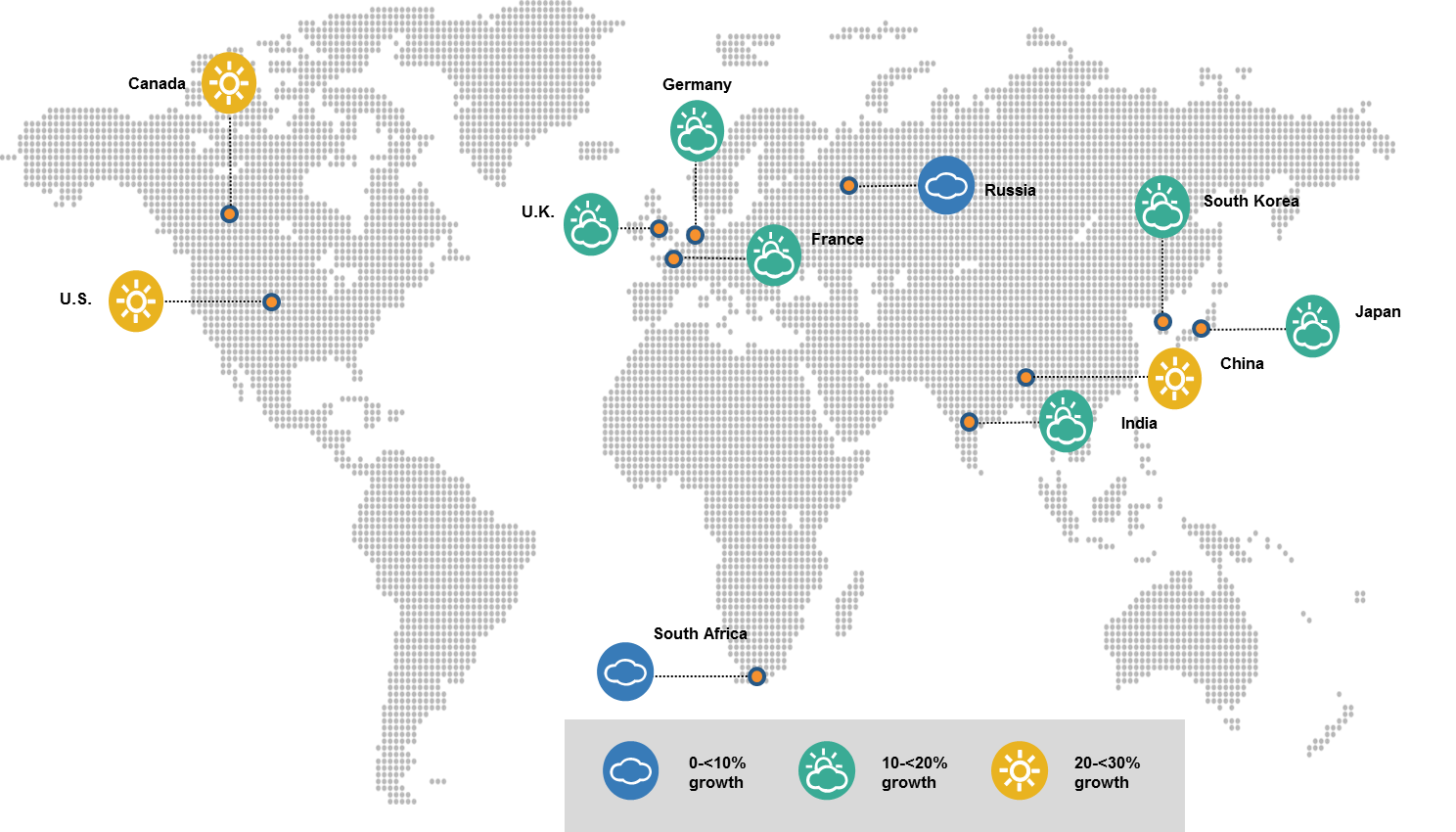 Augmented Reality head up display technology
Augmented reality (AR) is an upcoming trend in the head-up display market. Augmented HUD is a real time technology which enhances the safety and driving experience. Augmented reality-based HUD technology provides full-colour advanced driver assistance system (ADAS) including lane departure warning system and advanced driving information. The AR-HUD sense the exterior environment of the vehicle, analyses this information and virtually display the traffic condition. For example, if the driver has set a destination on the navigation system, the AR-HUD projects a virtual route that is to be followed. It also detects the distance between itself and the vehicle in front and alerts the driver. The differentiating factor for AR-HUD is that it projects information which appears to be part of the driving situation itself.