Floating Wind platforms will begin to deliver multiple Gigawatts of electrical power by 2024, and will accelerate to as much as 18.9GW of capacity by 2030. This is the conclusion of a new Rethink Technology Research report from its Rethink Energy service, the first such forecast, entitled ‘Floating Wind on the verge of liftoff - Ten year forecast; bright future’.

After more than a decade of hard work, Wind Turbines on Floating Platforms are about to come into their own. The Rethink forecast has a potential span of between 11.8GW up to that impressive 18.9GW, believing that the higher figure is more likely.

The area of doubt is the speed of adoption to full scale among the many well known regions which are currently demonstrating floating wind or planning to. By 2035 Rethink are pretty sure that all projects will have been caught up and the market place will reach 28GW of capacity, and that by 2030 the LCOE for floating wind will be down to just over $44 per MWh.

Early markets will include the UK, France, Portugal, Japan, the US, South Korea and Taiwan but Rethink anticipate delays as no-one wants to be the pioneer with arrows in his or her back. All of these initial major programs are supposed to be complete by 2030, but Rethink anticipates a slow adoption towards government inspired capacity targets. 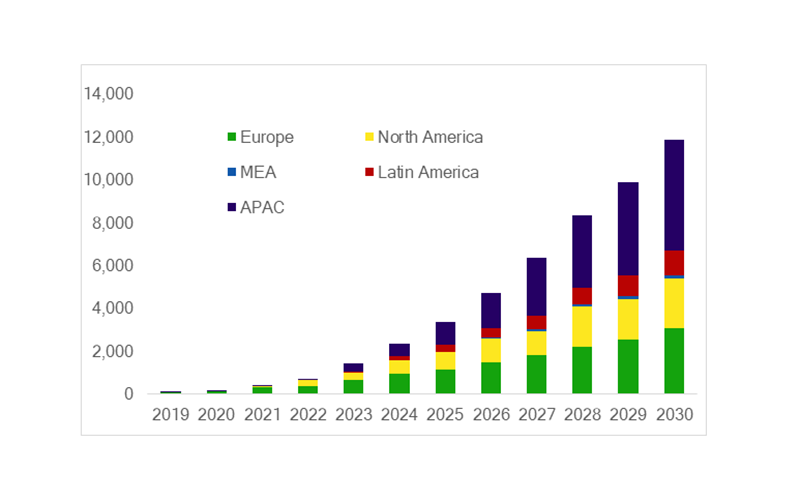 Initially only three or four floating platforms will be sufficiently well established to make projects ‘proceedable’ with many firing the starting gun in 2020 and 2021.

There is predicted to be a four or five year delay before the early pioneers on Floating Wind are caught by regional upstarts and later designs, giving them ample time to repay the costs of researching this area ahead of the market and captivating significant market share.

The Levelised Cost of Energy for this technology should be competitive with offshore wind with fixed foundations in the 2026/7 time frame, with the result that a massive rethink from one platform to the other will begin, taking this market into the stratosphere.