Enhancing blueberry growth with the IoT

Duncan Frazer, Applications Manager, System & Software Group, Imagination Technologies, explains how the company is working with a service provider and a system integrator to help increase productivity on a blueberry farm in Portugal.

According to the United Nations, world population will reach more than nine billion by 2050, therefore a dramatic increase in food production is needed in the next 35 years. The farming sector will be under great pressure to provide enough food for such a high population. Additionally according to the UNFAO (Food and Agriculture Organization of the United Nations) global warming will have a huge impact on the water resources available for food production, making water conservation an extremely pressing concern.

Bearing in mind these macro factors, farming entrepreneurs will inevitably have to increase the quality and quantity of their production while also reducing its impact on the water and energy resources. Technology will play a fundamental role by finding solutions to these issues.

Such technologies will allow users to quickly and analytically determine the main production costs and levels of inefficiency in their operations. With this information the farmer can make structural and operational decisions in a more informed and mindful fashion. For example, calculating precisely the crop’s evapotranspiration level as the sum of both the water evaporation direct from the soil as well as the crop’s transpiration water use – and hence the real needs for water and nutrients – can provide the key data to supply only the optimum quantity of water to a crop for maximum fruit growth, thereby reducing waste associated with excessive watering. With water use tightly controlled, farmers can both keep their costs for water collection and distribution to a minimum, and use predictions of any shortfall in water stock to arrange critical resupply.

Of course even with suitable agronomy expertise in crop cost management to achieve these costs savings, there are still many challenges in collecting data from multiple remote locations and transmitting it back to a central point for analysis.
One of the less well discussed challenges, but a clear problem to be solved, centres on managing data collection deployments. For large deployments to be cost effective they must have minimal support overhead. This means that control and maintenance of remote data collection points is essential.

With all of this in mind, IP provider Imagination Technologies, a system integrator, MakeSense, and a service provider, Agroop, are working together to develop a smart agriculture solution for a blueberry farm in Portugal.

Based in Portugal, Agroop is a Software as a Service (SaaS) company focused on providing a universal tool which allows farmers to manage their activities in an integrated, collaborative and informed way. Agroop makes available its expertise via a cloud-based SaaS product with associated plans.

To enhance its service, Agroop designed a product called a ‘Stoock’, a solar powered unit that collects temperature, soil moisture and humidity data and transmits it back to the Agroop service for analysis.

To build the Stoock, Agroop needed the help of a system integrator, and turned to a company called MakeSense.

MakeSense are building a secure online service for device management, event analytics and systems interoperability to support the rapid development and facilitate the adoption of their technologies, and allow makers and users to manage devices, collect data and automate tasks.

Imagination provides both the Creator Device Server and the Awa LWM2M library as open source framework components for IoT developers as part of its Creator programme. The Device Server is a server side technology framework for IoT that is designed to securely manage devices over their lifetime addressing the challenges of connecting devices to networks, provisioning devices, controlling, auditing and managing devices, and performing software updates from the cloud. The Awa LWM2M library provides the matching client side functionality for embedded devices and gateways to interface with the Device Sever.

Both the Creator Device server and Awa LWM2M libraries are hardware agnostic, although maximum security can be achieved when used in conjunction with devices that leverage Imagination’s OmniShield-ready MIPS processors (OmniShield is Imagination’s multi-domain security solution across its processors including MIPS CPUs).

Imagination’s Creator programme not only encompasses the software needed to connect devices between each other and to the cloud, but also offers a family of development kits for rapid prototyping and production.

The Creator Ci40 ‘IoT in a box’ kit is the most complete development kit for IoT, with the powerful Creator Ci40 IoT hub, flexible expansion boards, a range of sensors, support for a variety of operating systems and the software needed to securely connect to the internet. For IoT applications, the kit features performance efficiencies, ultra-low power connectivity, wide ecosystem support, flexibility and expandability.

Above: Imagination’s Ci40 IoT in a Box Development Kit

Efficient blueberry production with creator
Blueberry farms consist of large numbers of bushes arranged to allow multiple bushes to be watered and tended efficiently. Irrigation of the bush beds is performed through the use of above ground leak pipes that provide water directly onto the soil surface, or at a raised position running through the bush branches. 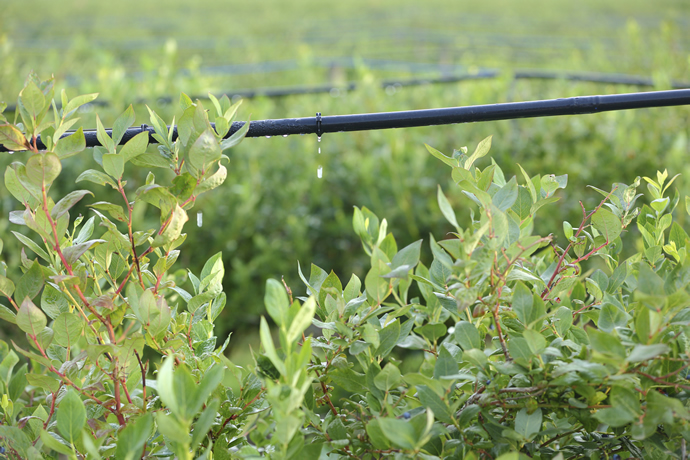 By leveraging the LWM2M device management protocol for communications between the deployed device and connectivity hubs, MakeSense have been able to build a complex system of devices requiring minimum hands-on maintenance ensuring ongoing costs to run the system are kept in control. Building on the LWM2M device management protocol ensures that the system has not only a rock solid message delivery system for day-to-day communication, but also a management protocol for activities such as remote software updates or remote rebooting of devices - again helping to reduce the manual overhead of maintaining a physically distributed system of devices. 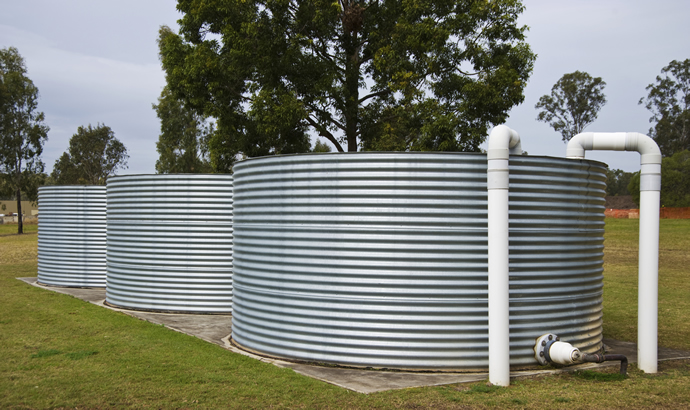 Data collected by the Stoock monitors is supplied to the Agroop control system for analysis that results in irrigation controls being applied. Optimised selection of how much water to apply to which bush beds results in the highest fruit yield for the given use of water; optimisations that can in turn be extended to take account of weather conditions and predictions that prevent wasted water use during the hottest part of the day or unnecessary watering of the crop ahead of predicted rainfall. 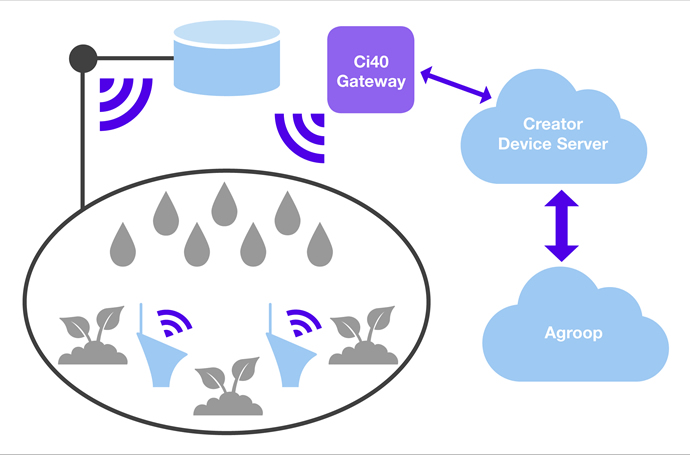 Above: The MakeSense/Agroop product chain

The Internet of Things is still evolving and challenges around security and interoperability remain major concerns. The industry must work together - through standards groups, open source efforts and partnerships to address these challenges, and drive innovations for IoT. The agriculture focused collaboration between Agroop, MakeSense and Imagination is an example of how companies can leverage their combined strengths to bring about innovative solutions.