Home > Products > A first for aviation, a first for energy
Renewables

More than a year after its initial take-off, the Solar Impulse 2 aircraft has landed in Abu Dhabi this morning – completing its round-the-world, 25,000 mile journey. The solar powered aircraft first took-off from the UAE in March 2015 and has since landed in 16 different locations including India, China, the US and Spain.

The aircraft was the brainchild of Bertrand Piccard who wanted to accomplish the world’s first round-the-world flight purely powered by solar energy – thus highlighting the technology’s potential. The aircraft is powered by over 17,000 solar cells and runs on battery power at night – it took 70 hours for the plane to cross the Atlantic Ocean and 118 hours to cross the Pacific. The final leg of the journey saw the Solar Impulse 2 take-off from Cairo, Egypt, last Saturday (23rd July) and travel the 48 hours to Abu Dhabi.

The plane is capable of flying almost perpetually, with the only limiting factor being the endurance of the pilot in the difficult conditions aboard (the cabin is unheated and unpressurised). Piccard shared the flying duties with colleague André Borschberg, who flew the longest leg of the journey (4,000 miles from Japan to Hawaii), breaking the world record for the longest uninterrupted aviation journey in the process.

Speaking to CNBC Piccard commented: “It really shows that you can do incredible things with clean technologies and renewable energies, like flying day and night on solar power with an aeroplane with unlimited endurance because you don't need to refuel.” 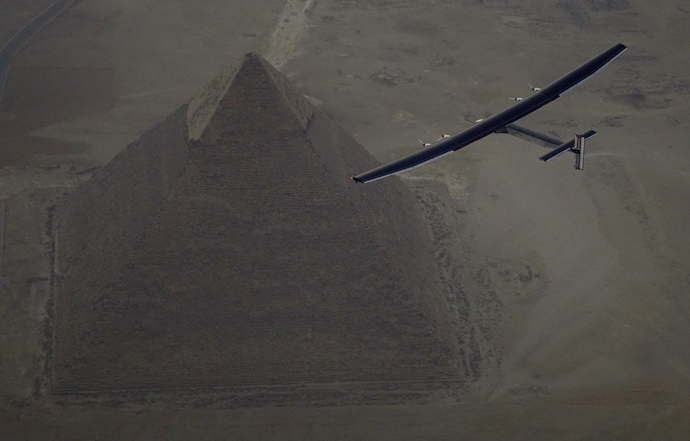 The record-breaking trip was certainly not without its pitfalls which included the Solar Impulse 2 being grounded for several months while overheated batteries were replaced. Despite the epic achievement, Piccard was keen to reiterate the bigger picture. “Very often when you speak about the protection of the environment it’s boring and expensive and we wanted to demonstrate that it’s exactly the opposite, that you have now clean technologies that are profitable, they create jobs, they make profit, they sustain growth and at the same time if they were implemented everywhere, they would divide by two the CO2 emissions of our world and save natural resources and decrease pollution,” he said.

In terms of how the Solar Impulse 2 stacks up against a Boeing 747, it has a bigger wingspan but is over 150 tonnes lighter (about the weight of an average car), and as it is powered by solar energy, the CO2 emissions per passenger works out at zero, compared to 101kg for the 747. It should be reiterated that the flight was not to assist the development of solar planes for widespread use, but to showcase to potential of the technology. Piccard added: “All the clean technologies we use can be used everywhere. We have flown 40,000km, but now it is up to other people to take it further.”

Speaking to Piccard live on Facebook on completion of the journey, UN Secretary General Ban Ki-moon commented: “You may be ending your journey, but the journey to a sustainable world is just beginning. You are helping to pilot us to that future.”