Developments in low power for the Internet of Things (IoT) have led to the emergence of consortia that develop and promote low power protocols for wireless devices. By Josh Mickolio, product manager, RF and wireless, Digi-Key.

Smart energy is becoming an increasingly important and competitive capability in the IoT. The ability to run a sensor node for months, or even years, rather than weeks, is driving chips and system developers to look at new ways of deploying vast networks of devices.

The latest innovation has emerged from the Thread Group, a consortium of companies that includes Nest, the California start-up that developed a smart thermostat and networked smoke detector, now owned by Google, ARM, Silicon Labs, Samsung Electronics, Freescale Semiconductor. Big Ass Fans and lock maker Yale Security are also in the consortium, as air conditioning systems and locks are the end products that will be controlled across the internet.

The consortium intends to roll out Thread, an IP-based wireless networking protocol, designed for low-power connected products in the home.

Thread technology is based on 6LoWPAN, which uses the 802.15.4, 2.4GHz wireless protocol, also used by ZigBee. 6LoWPAN is specifically designed to support the larger IPv6 address space that is needed for IoT with a low power, low data rate network running at up to 250kbit/s. 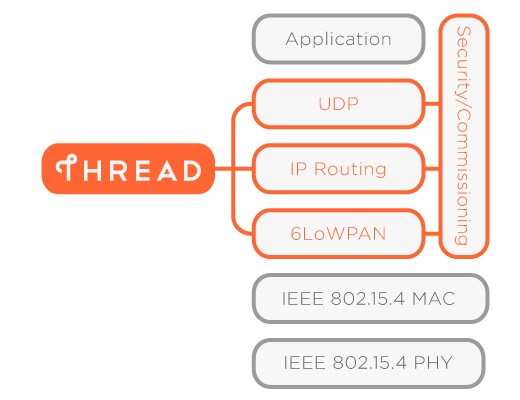 Thread offers robust, self-healing, mesh networks that scale to hundreds of devices with no single point of failure. This reduces power as there is less need to retransmit packets. The Thread devices will also be simple to install with a smartphone, tablet or computer to securely connect Thread devices in the home, to each other, and to the cloud.

Thread is not an application protocol or a connectivity platform for disparate networks. It is an IPv6 networking protocol built on open standards and optimised for low-power 802.15.4 mesh networks. As a result, existing, popular application protocols and IoT platforms can run over Thread networks. This provides a significant advantage as millions of existing 802.15.4 wireless devices already on the market – mostly running ZigBee - can run Thread with just a software enhancement, with no new hardware required.

Unlike 6LoWPAN, ZigBee uses a hub to connect the IoT sensors, although the latest version of the former protocol supports IPv6 and more direct connections, as well as low power modes with higher data rates.

Thread will also compete with other low power technologies that are emerging for the IoT. The Bluetooth Special Interest Group (SIG) has approved two low power versions of the point to point protocol for Bluetooth Low Energy (now called Bluetooth Smart). BT Smart 4.0 and 4.1 add low power modes to cut the power in connecting devices – 4.0 for personal devices such as fitness monitors, and 4.1 for longer range IoT devices. Cambridge Silicon Radio also has a technology called CSRmesh that uses BT4.0 to provide a low power mesh network for IoT applications, similar to ZigBee, but without the hub. It is making this an open protocol and the Bluetooth SIG is working on a mesh version. There is a proposal from 6LoWPAN to include elements of this technology in Bluetooth Smart.

The latest version of the Wi-Fi 802.11 standard moves to the sub Ghz band with the 802.11ah to save power and provide longer range. It removes the need for regular polling that made Wi-Fi a relatively power-hungry technology. The combination of low power modes, much longer sleep modes and operation at around 900MHz will make Wi-Fi a significant contender for low power IoT networks, as nodes will be able to automatically join existing wireless networks.

Imagination Technologies has developed a configurable radio processing unit (RPU) that can handle all the Wi-Fi protocols, including 802.11ah, as well as Bluetooth 4.0 and 4.1 and, if necessary, ZigBee. The Whisper architecture combines a configurable modem block with much of the MAC functions handled in a Warrior class MIPS processor (Figure 3). The RPU design allows the device makers to have a single, underlying architecture and configure it for different products for different standards. For example, a dedicated 802.11ah implementation will be half the size and power consumption of a full 802.11n Wi-Fi design, and can be used alongside a Bluetooth block, for example. Taking this configurable route is the way to achieve lower power, says the company.

Other consortia are looking to build low power smart energy networks for IoT. Weightless is an open standard that operates in a range of bands, including the unlicensed sub GHz band, to provide a low power implementation.

The OIC aims to create a common communications framework based on industry standard technologies to connect and manage IoT devices. The open source layer is intended to be agnostic to the form factor, OS or service provider and cover a range of existing and emerging wireless standards rather than be just one radio technology.

The OIC is competing directly with the AllSeen Alliance, backed by Qualcomm, Microsoft and Cisco. It advocates the AllJoyn open source technology, developed by Qualcomm. There are 50 companies signed up, including Sharp, D-link and Wilocity. AllJoyn targets core building blocks and services to discover new devices, how they connect and security used across wireless and wired networks. The aim is to standardise and allow devices with different technologies to interact; the focus is on service-level discovery, capabilities broadcasting, remote procedure calls, interface sharing and message handling, along with the ability to react to dynamic, ad-hoc network changes.

Trading data rate, packet complexity and wireless duty cycle to reduce the power requirements and extend battery life is leading to a split of protocols and standards. It is now down to the different applications and the co-operation of suppliers that will determine the protocols with the critical mass, and the cost-effective solution.