Our website is made possible by displaying online advertisements to our visitors. Please consider supporting us by disabling your ad blocker.
Home > Products > How fluxgate technology drives innovation
Power

In order to improve performance beyond that of existing sensors, new ideas are needed. Several related improvements must be made, and the result is a compact transducer which maintains its accuracy over a wider temperature range and has a reduced noise level.

First, an introduction to fluxgate current transducers. The fluxgate current transducers described here are closed loop devices, in which the magnetic field created in a magnetic circuit by the measured or primary current, IP, is exactly cancelled by a secondary or compensation current, Icomp, passed in a coil of Ncomp turns around the same magnetic circuit. In the general case, where the primary current may have Np turns, IP is simply given by: IP = Icomp x Ncomp / Np

The zero-field condition is detected by a fluxgate, which consists of a coil wound around a ferromagnetic core that saturates in the presence of a magnetic field. The inductance of the coil reduces when the core saturates. If a symmetrical square-wave voltage drives the fluxgate the rate of change of its current will increase when it saturates but the current waveform will be symmetrical unless a magnetic field due to the primary current is additionally applied, in which case the waveform will be asymmetric.

Figure 1: (a) Fluxgate drive waveform, (b) and (c) Fluxgate current in the absence and presence of an external magnetic field

Figure 2 shows the operation of a current transducer using this principle. The square wave voltage is applied to the fluxgate with the H-bridge. Its current is converted to a voltage by resistance R, and its symmetry is measured by a signal treatment such as detecting the second harmonic of this waveform. The loop is completed by driving the compensation current with the Class AB amplifier such that this second harmonic is zero. Icomp is converted to a voltage by Rm.

The fluxgate system covers the DC and low frequency range of the primary current. For higher frequencies the current transformer effect is used directly. The fluxgate is a passive element which is driven symmetrically. Together with the use of the second harmonic to detect zero field, this gives a system whose offset, and, more important, whose offset drift, is low, being principally constrained by the electronics of the feedback system. The turns ratio Ncomp / Np is exactly known, so the transducer is very accurate and stable. It operates at zero magnetic field provided that the loop gain is high enough, which gives a system linearity. The transformer effect allows for a good response at high frequencies. Unlike a Hall-cell-based transducer, there is no sensing element with a high resistance so the white noise is low.

However there are some limitations. The voltage drive which excites the fluxgate may couple into the secondary current and add an unwanted signal, or ripple, at the excitation frequency. This can be overcome by driving a dummy fluxgate in anti-phase to the one used in the measurement loop, though the effectiveness of this is limited by the fluxgate matching.

In general, the fluxgate loop will not function up to the frequency at which the transformer effect takes over. This frequency gap must be filled, for example, by a pick-up coil whose output voltage is proportional to the rate of change of the primary current. After integration, this signal is summed with the output of the second harmonic detector and used to drive the secondary current.

The electronics in the control loop is quite complex, and if implemented in the analogue domain there are many blocks which have the potential to contribute offset, noise from the supplies, for example. In some transducers the electronics is physically separate from the magnetic components at the heart of the system.

In certain situations, the fluxgate may always be saturated which gives a ‘false zero second harmonic’ condition. The loop which generated Icomp then has no gain, since changing the value gives no change in the second harmonic measurement. This condition needs to be detected and corrected.

In the new IN 2000 current transducer from LEM, a higher level of integration, maximum signal processing in the digital domain, and a new approach to the architecture of ripple cancellation at the fluxgate drive frequency.

A key element is the use of a high performance digital signal processor (DSP) in the feedback loop. This allows signal processing to be in the digital domain, which means that after the ADC there is complete immunity to temperature effects, interference and supply voltage variation. In particular, offset and offset drift are improved. There is a flash memory in the DSP, allowing the storage of some calibration parameters whose value may be adjusted for each different transducer. These features come without any increase in the physical size of the electronics.

The DSP is used to reduce the interference or ripple from the fluxgate driving signal at a fixed frequency of 16kHz. Instead of simply switching the fluxgate voltage between positive and negative values (Figure 1a), the drive waveform is shaped in such a way that the higher frequency harmonics are reduced. The remaining interference is eliminated by driving a ‘ripple compensation coil’, whose amplitude and phase are adjusted during the calibration of each transducer. Ripple compensation is kept constant over all operating conditions with a local loop which forces the source of the ripple, the fluxgate drive, to remain constant, so the compensation signal is always effective. Earlier transducers allow the fluxgate excitation frequency to vary for its current amplitude to remain constant.

The IN 2000 system’s enhancements result in a transducer with very high accuracy and low noise, over a wide temperature range. After calibration the remaining peak-to-peak ripple is less than 50ppm, relative to the full scale transducer output, over a -40 to +85 C operating range.

A comparison of the ripple at the fluxgate drive frequency at the transducer output (Figure 3) uses two traces to demonstrate the difference between the IN 2000 transducer and a 2000A transducer of the previous generation. With the IN 2000, the ripple is hidden in the thermal noise. 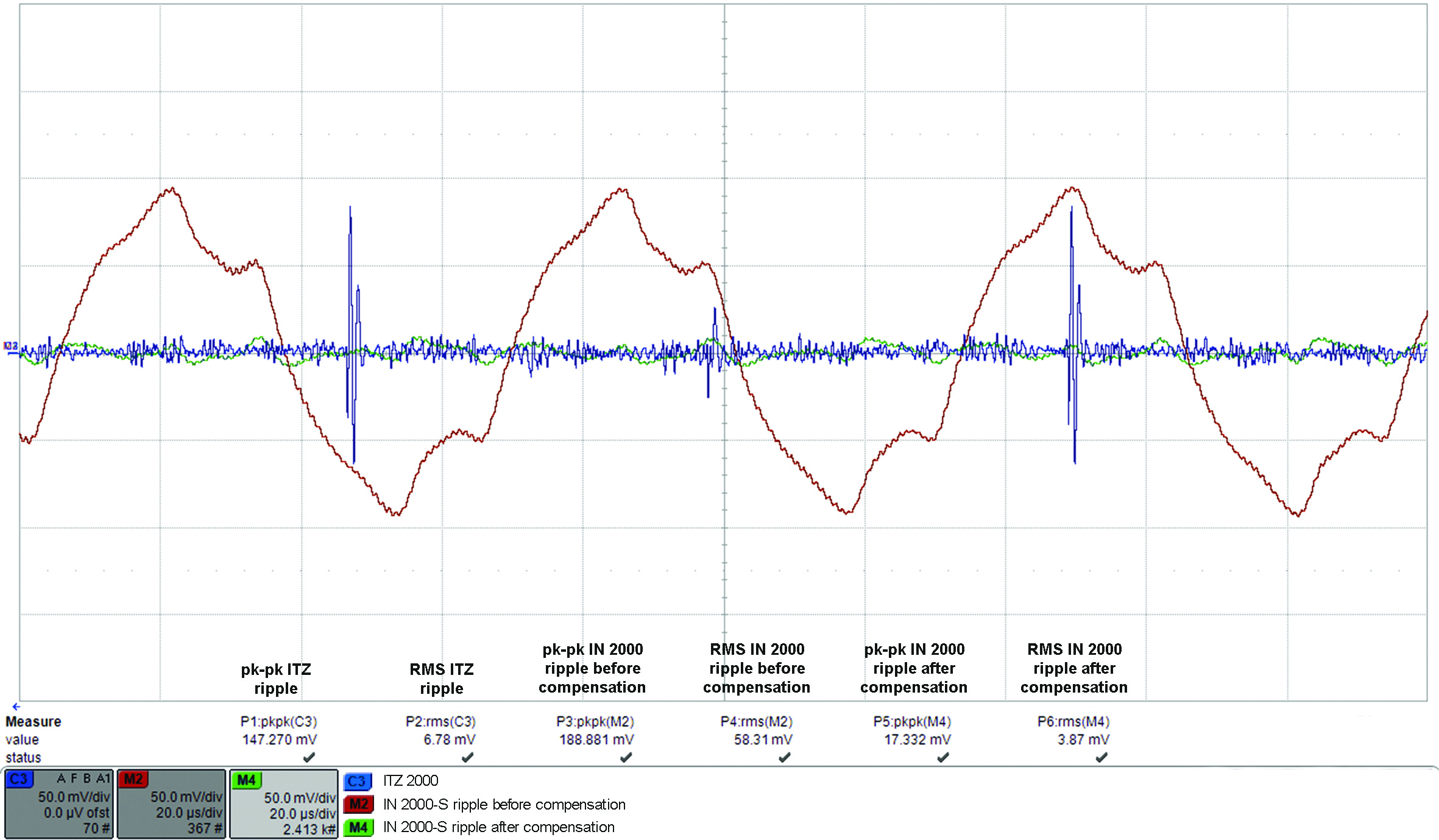 Figure 3: A comparison of the ripple at the fluxgate drive frequency at the transducer output

The ripple before calibration of the compensation circuit, shown as the red trace in Figure 3, is comparable with the spikes of a transducer of the previous generation (blue trace); after calibration the ripple disappears into the noise at the output (green trace).

Two conditions may cause the fluxgate to be always saturated, a non-zero primary current when the transducer is powered up, and a primary current which exceeds the transducer range by more than 10%. When this overload situation is detected Icomp is swept continuously between the extremes of its measuring range. In this way when Ip is in the allowed range, the fluxgate will de-saturate and normal operation of the feedback loop to set a zero magnetic field at the fluxgate resumes. Saturation of the fluxgate is recognized by detecting an increase in current.

As well as reacting to the overload condition, the IN 2000 is self-protected by a software routine that checks external and internal supply voltages. When a fault is detected, the IN 2000 gives a status output on a dedicated connector pin. The user knows that an action is needed to return to the conditions in which the measurement accuracy is guaranteed.

A 200-turn test winding is provided so that the transducer function can be checked using a current of 1.0A without interfering with its installation in systems where access is difficult.

For operation over a wide temperature range, thermal simulations ensured that there were no unexpected hotspots in the transducer. 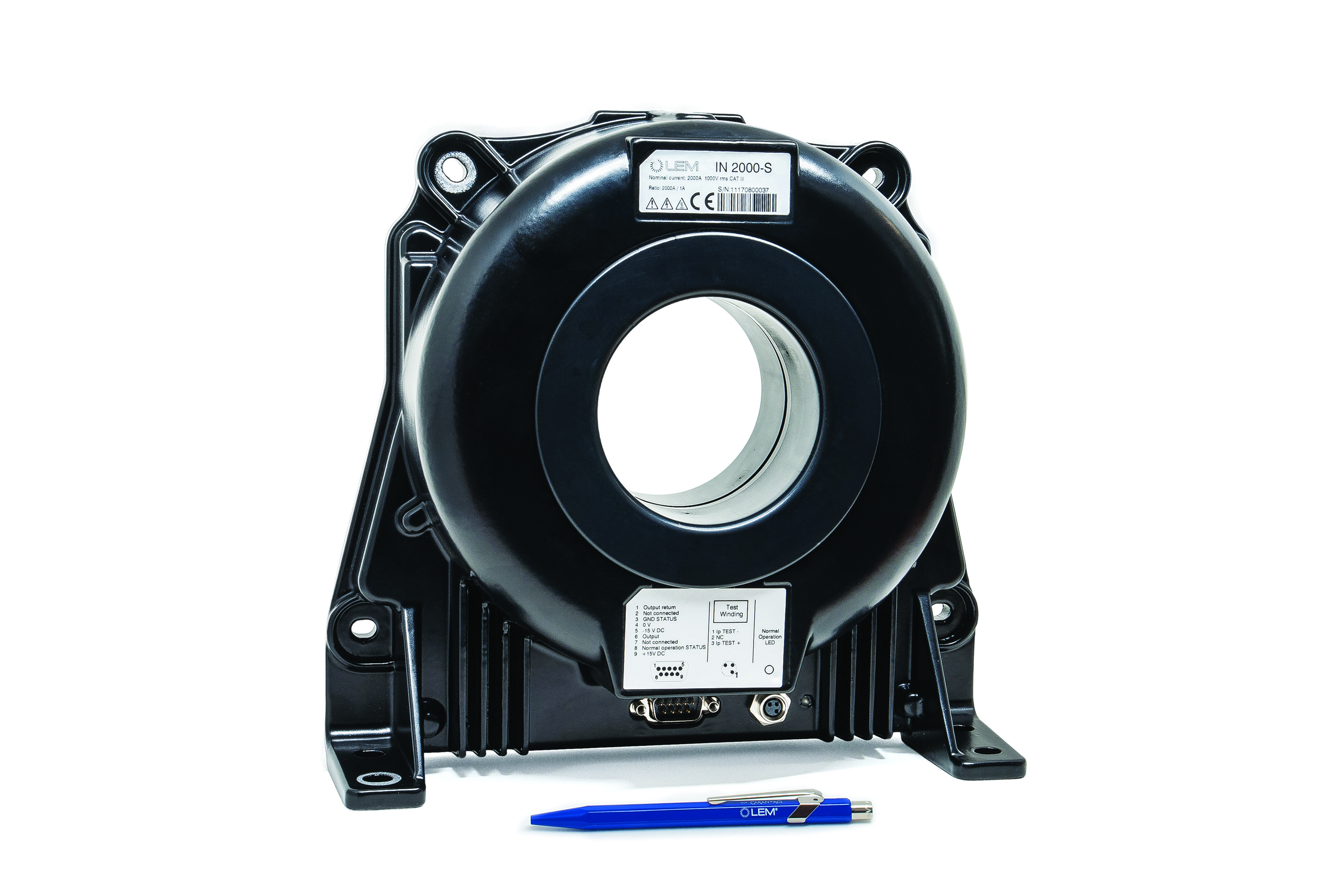 The IN 2000’s (Figure 4) housing is metallic to shield from external sources of interference. EMC immunity is further improved by situating the fluxgate inside the primary magnetic circuit. An extensive characterisation of the IN 2000 has been performed over the full temperature range. Figure 9 shows the accuracy of a population of parts at -40 and +85 C.

In general the validation of apparatus and equipment is made by certified laboratories using high-performance test benches supported by high-technology measuring devices including extremely accurate current transducers. These must therefore maintain their accuracy over the full temperature range of the equipment tested, for example, in automotive tests benches.

Performance which is needed for test equipment is also desirable for traditional industrial applications which are more and more demanding in high-performance applications such as medical equipment (e.g. MRI, proton therapy etc.), precision motor controllers and metering.

The IN 2000 transducer represents a new step forward in the performance which may be obtained from fluxgate transducers. Its high accuracy and low noise, both maintained over a wide temperature range, together with its compact physical size, will increase the breadth of applications for which this type of current transducer is the optimum choice.