Home > Products > Smoothing the path towards IoT and Industry 4.0
IoT

Smoothing the path towards IoT and Industry 4.0

The IoT and Industry 4.0 are areas of emerging technology that are having a tremendous impact on today’s electronics. Before taking a closer look at how these two concepts are related and what their impact really is, it is worth explaining the meaning of both terms.

IoT is the concept of using the internet to connect ‘things’ (e.g. devices, machines, appliances), people and cloud services to each other, which in turn creates opportunities for new use cases and business models. 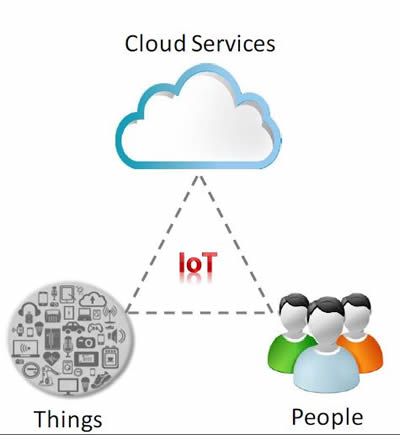 Figure 1: Illustration of the concept of the IoT

However, the numerous benefits expected from this approach raise one question - what stopped the industry from embracing this technology in the past? The answer is simple. Specific technical, economic and maybe even social conditions had to be met before it was possible to make the IoT a reality.

Optimum conditions
Today’s microcontrollers (MCUs) provide the necessary intelligence in the ‘things’ that are at the edge of the network, and adding connectivity is cheaper and more straightforward than ever before. Furthermore, the availability of low power semiconductor devices enables a more widespread use of battery operated solutions. Another factor facilitating IoT applications is the prevalence of internet access, creating new connectivity options. Apart from collecting sensor data and controlling actuators in the nodes, this ubiquitous broadband connectivity enables over-the-air software updates of distributed systems.

Applications can thus be upgraded in the field to eliminate bugs, to implement additional functionality or to close security gaps. Finally, the availability of low cost public cloud services lowers the entry barriers for OEMs and other companies looking to operate in this promising field. It is therefore justified to say we have come to an inflection point in the development of the IoT.

The potential size of the IoT related market is significant. While the PC market reached a volume over 300 million units annually, the cell phone market has arrived at almost two billion units annually. The IoT related market, however, is expected to be another order of magnitude at more than 50 billion units by 2020. The reason for this enormous volume is that the IoT has the potential to be a real game changer. In fact, IoT applications will enable companies to generate new revenue streams with their existing products and services, limited only by the imagination of their designers. Furthermore, new working practices will also be inspired by the IoT, ultimately kicking off substantial changes to existing business models and strategies. 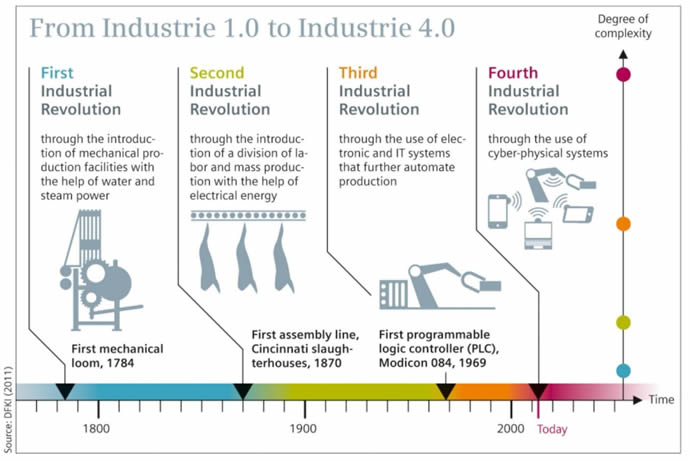 IoT vs Industry 4.0
Industry 4.0 has its roots in a project initiated by the German government. After the invention of the steam engine, the introduction of assembly lines and the use of Programmable Logic Controllers (PLCs), the arrival of cyber physical systems marks the fourth industrial revolution that will create smart factories that are adaptable, use their resources efficiently and offer ergonomic advantages. Customers and partners are integrated into the process. All in all, a productivity increase of up to 30% can be achieved based on the current estimates. The groundwork of this includes so-called Cyber Physical Production Systems (CPPS) consisting of sensors, processors, software and communication systems that enable the ‘5C’ architecture (connection, conversion, cyber, cognition and configuration).

Industry 4.0 is also assuming a complete status of the factory is maintained in the cloud, and therefore, IoT is also part of the groundwork for Industry 4.0. In a way, Industry 4.0 can be considered as a special case within the IoT theme. Similar initiatives have also been started in the US, including the Smart Manufacturing Leadership Coalition (SMLC) and the Industrial Internet Consortium.

Factory automation and process automation represent the focal point of the IoT enabled fourth industrial revolution, but the same concepts could be expanded into markets like building automation and smart grid. Instead of being an end in itself, Industry 4.0 is a future focused concept leading to improved control features, increased energy efficiency, higher reliability and enhanced safety.

Real world implementation
Let’s now illustrate this concept with a practical example. In a manufacturing application, the equipment in the factory floor will be using numerous sensors and actuators connected to MCU enabled nodes where the data is pre-processed and aggregated. These nodes, in turn, use gateways, bridges or routers to communicate with an IoT cloud for data storage. This cloud-based data pool can be used for monitoring and visualising the status of the complete factory as well as analysis and analytics. In addition, operators can use their handheld devices (smartphones or tablets) to connect to the cloud for remote control purposes. Thus, the data provided by the sensors are stored in the cloud in order to be available for visualisation, analysis, decision making and control purposes.

Predictive maintenance is an attractive concept enabled by this rich environment. Instead of waiting for equipment to fail, condition monitoring, compared to historical data collected from the same machine, could be used to identify early indications on upcoming faults. In the case of an electric motor, data collected by current, pressure, temperature, vibration and sound sensors are sent to the cloud via a secondary non-real time IoT network to avoid overloading the main Industrial Ethernet (IE) network, which is oriented towards real time control with some (limited) diagnostic data. Once in the cloud, the data can be used for analysis, event and work order generation, notification and visualisation. Based on the analysis of this pool of data, maintenance personnel can be notified whenever preventive maintenance work is needed.

How do things connect to the IoT?
Sensors and actuators, which are the ultimate ‘things’ in the IoT scenario, can use wireless connectivity technology such as ZigBee, Bluetooth low energy, Sub-1GHz or wired nodes to connect to an IoT gateway, which in turn uses an IoT agent to connect to an Internet router acting as the final link to the Internet. A simpler approach is possible with WiFi, 6LoWPAN and Ethernet nodes which support Internet Protocol and therefore can have on-board IoT agents for direct connectivity to an Internet router without the need for a gateway.

Let’s consider the example of a flow meter based on an MSP430 MCU, and an analogue signal chain and power management solution from Texas Instruments (TI). Using a Sub-1GHz device, this piece of equipment communicates with a gateway device based on a Sitara processor, which in this case is complemented by power management functionality, a Sub-1GHz device for connectivity to the nodes and a WiFi device for cloud connectivity. 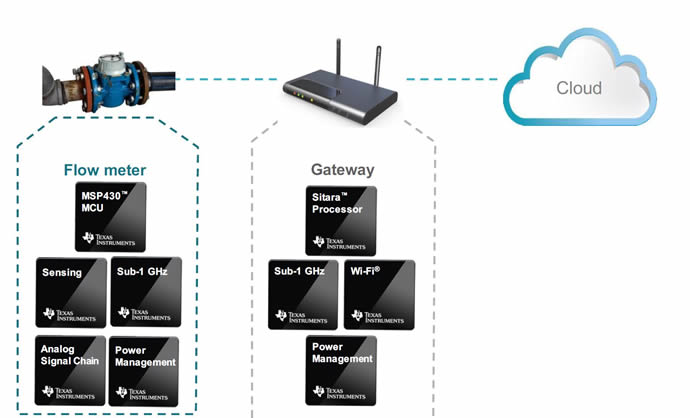 What are the challenges?
The numerous challenges of the IoT should not be overlooked. For example, the IoT is all about establishing in the cloud a detailed view of the physical world, allowing better analytics and better decision making. It is not a trivial task to sense critical parameters in a complex environment and it might require using a broad set of sensing technologies. In addition, the best connectivity option must be chosen for each application. WiFi, ZigBee, 6LoWPAN, Bluetooth low energy, Ethernet and others each have their specific strengths and drawbacks, and a one-size-fits-all approach will not work. ZigBee is often used for lighting control applications, while Bluetooth low energy is quite frequently used for connecting to phones or tablets. WiFi connectivity, in turn, is a popular choice for thermostats and other home automation applications while Sub-1GHz is a great choice for deployments that need extended range with very low energy consumption.

As a first step, a decision must be made between wireless and wired approaches. While wireless solutions feature flexibility and ease of installation, wired connectivity may be more robust in noisy environments. Power is a critical aspect as well. Quite often, sensors and actuators will be placed in remote locations, making battery replacement a costly, laborious task. Low power consumption therefore is a must, and energy harvesting can be an attractive option to achieve longer battery life or even fully autonomous operation. Smart power management and precision analog ICs are an effective first step in the quest for low-power operation. Secondly, low-power MCUs can make a significant contribution to achieving months or even years of operation with a single battery.

Security is another issue that is growing in importance. IoT systems must implement effective security measures to make them more immune to cyber-attacks and other kinds of security threats. These security measures implemented by the IoT system provider, leverage security features made available in the device level. Protection is needed at all levels but when it comes to the integrated circuit, we need to protect the software (code), the data, the identity of the device and the security key, and all these elements need to be protected when stored, processed or transmitted. Secure boot, debug security, cryptographic acceleration, device identity and initial secure programming are among the most common security features that TI would offer to help implement security measures. External wired and wireless interfaces deserve a special attention, because they can be the significant weak spot that is exploited by attackers to infiltrate malicious code or steal data. Furthermore, end to end security from the node to the cloud assumes the use of special security measures required by the different cloud providers. All in all, security is vitally important to protect devices, solutions and services of manufacturers, service providers, customers and consumers.

Is there an easy path to the IoT?
In light of all the considerations described above, it might seem that IoT-related design work is a highly complex, obscure and daunting experience requiring tremendous expertise and exotic hardware. To turn the IoT into a mainstream application, system designers must have access to straightforward solutions. For this purpose, TI has focused on ease of use as a key attribute of its solutions. It starts with a rich portfolio of devices, continues with a very robust software development environment and ends with a broad set of TI Design reference designs which show how to implement different sub-systems of real-life products. To address the challenges of wireless connectivity designs, TI has preloaded a complete network stack on some of its WiFi devices – providing an Internet-on-a-chip solution. To address the challenges of RF design TI is providing some of its wireless MCUs in pre-tested modules (as well as discreet devices).

A starting point to try out the IoT concept is to use TI’s SensorTag kits. The battery-operated kits integrate different types of sensors and include preloaded cloud access support which can instantly demonstrate how the sensor data is visualised in the cloud. When moving to develop prototype applications, TI LaunchPaD development kits provide the essential basic elements for rapid prototyping. In addition to TI MCUs and wireless MCUs, the LaunchPad kits come with a standardised pin-to-pin-compatible BoosterPack plug-in module interface to enhance the functionality of your design. Wireless BoosterPack modules are available for Sub-1GHz, NFC/RFID, WiFi, ZigBee, Bluetooth and more. In addition, there are a huge number of BoosterPack plug-in modules from TI and third-party suppliers for thermocouples, MEMS temperature sensors and sensor hubs. Multiple BoosterPack plug-in modules can be connected to a single LaunchPad kit in order to create sophisticated applications and demos.