A battle is raging for the next generation of consumer systems in the home. The ‘smart home’ brings together control and monitoring as part of the Internet of Things, with a focus on how systems can make life easier. In this article Stadium Group’s Wireless business looks at the current state of technology for the smart home.

The latest Bluetooth 5 and ZigBee 3.0 technologies are battling to enable the smart home. There are still several technologies competing to connect up devices in the smart home as part of the Internet of Things (IoT). The strength of the internet, Cloud computing and new types of user interface such as voice control are competing with the need to have small, ultra-low power sensors and actuators connected to an efficient network.

Within the smart home, technologies such as WiFi, Bluetooth and ZigBee are all jostling for position. WiFi is the main wireless technology in the home, connecting phones, laptops and tablets to a broadband router to bring the internet to our fingertips. However, WiFi is designed for high bandwidth links of 50 to 100Mbit/s and is relatively power hungry, typically consuming 600mW for an embedded device in operation.

This doesn’t work well for small, low power sensors. The 802.11b and g protocols operating in the 2.4GHz band are prone to interference, both by other WiFi devices, by home equipment such as microwave ovens, and even by people moving around. Moving to 802.11a at 5GHz can help reduce interference but is more expensive and not always supported by tablets or smartphones. The next generation 802.11ac WiFi technology uses multiple antennas for transmitting and receiving signals through MIMO (multiple input, multiple output) topologies, in the router for now, reducing the impact of the interference, but this is not widely adopted in handsets or terminals as yet and has a higher power consumption than 802.11g or 802.11n.

Connections
However, WiFi is the de facto technology for the powered interface - whether it’s a tablet or a smartphone, an app can be downloaded to control equipment around the home by linking to the home router. Sometimes that link goes up into the cloud, for example for voice interfaces such as Amazon’s Alexa technology that is used in the Echo speaker system. However, sometimes a more direct connection is needed. 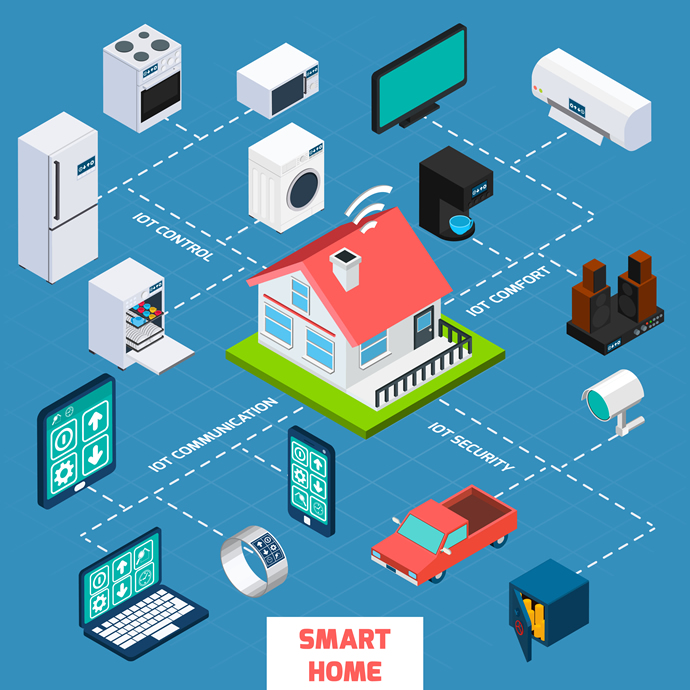 Bluetooth technology has been evolving to meet this need. Moving from ultra-low power wireless applications such as mice and keyboards to wireless headsets, the fourth generation of Bluetooth set its sights firmly on the smart home. Bluetooth 4, also called Bluetooth Low Energy (BLE) and Bluetooth Smart, aims to make connections to every device in the home. Optimised for low power and 1Mbit/s links to a smartphone, these latest versions of Bluetooth can capture intelligence from all kinds of equipment, from a toothbrush to lighting and smart door locks, and even to a basketball that can capture the number and strength of its bounces. The technology does not rely on a router such as WiFi and all smartphones can connect to a Bluetooth smart device if they have the right permission and download data to an app directly, using the phone as the link to the internet.

As a result this has been particularly popular in situations where there is no WiFi, such as fitness trackers and smartwatches. The vast majority of health trackers use the Bluetooth link to deliver data to a smartphone for display and sending onwards into the cloud. Similarly smartwatches provide updates, phone calls and alerts from the phone via Bluetooth.

This can even include the type of lighting from specific parts of the world, perhaps Stockholm or San Francisco, and change as the day goes on.

These combinations can be controlled by voice commands to a WiFi gateway, or by sliders on the display of a smartphone or tablet. Smart lamps can even give you a boost of stronger light to perk you up at the push of a button.

Over 30,000 companies are part of the Bluetooth Special Interest Group, and the next generation Bluetooth 5 is looking to increase the data rate and the range for IoT connections around the home and outdoors.

The specification is due out at the end of 2016 and chip makers have already started working on implementations, from the hardware baseband controller to the software protocol stack. This includes the link layer up to the GAP/GATT layer as well as services and profiles to deliver a standard interface.

The SIG has ambitious plans that the enhancements in Bluetooth 5 and planned future Bluetooth technical advancements mean that Bluetooth will be in more than one-third of all installed IoT devices by 2020.

This still requires a phone to be available to make the connection between the end device and the internet, rather than having the device directly connected. The technology is also limited in range to a few metres, usually by the power consumption and battery size of the end device.

This is opening up the opportunity for an ‘always-on’ low power technology. This was defined by the IEEE802.15.4 standards group that has provided a range of different ways to link equipment. 6LoWPAN provides ultra-low power links for remote controls, for example, but the main smart home networking technology using 802.15.4 is ZigBee.

Having gained some traction in industrial networks with a 250Kbit/s bit rate for sensor networks at 2.4GHz, ZigBee has never quite made it into the home until now. The latest version, ZigBee 3.0, brings together all the different profiles into a single protocol and the first home gateway reference design has been certified, allowing developers to build new systems quickly. This now includes the energy harvesting ZigBee Green Power profile for battery-less sensor nodes and interoperability among a wide variety of smart devices for home automation, lighting control, building automation and energy management to healthcare and telecommunication services.

One of the advantages of ZigBee is its mesh networking so that individual nodes communicate with each other and pass messages back and forth to a central gateway. This may be a stand alone device or even integrated seamlessly with a WiFi router to provide the link back to the

Cloud for constant monitoring. However, Bluetooth is also looking to add mesh capability into its specification.

The hardware and embedded software is just part of the challenge though. High level protocols such as Thread, AllJoyn and HyperCAT are looking to provide an abstraction layer for application developers that is technology independent. These are intended to work with many different types of underlying technology using hardware independent networking protocols such as MQTT and CoAP. However, there is still limited interoperability between these different high level protocols which could limit the take-up of the smart home devices.

Conclusion
The potential for the smart home is huge. Connecting all the electronics devices in the home, from lights to sensors to locks to heating, could deliver a wide range of advantages to the home user through apps and cloud-based services. Providing this smart capability is still a challenge, with different hardware, software and protocol providers all jostling for design slots. The latest specifications are the next step in making the smart home a reality.