A team of researchers at Kiel University has developed technology that emulates the way a gecko uses its toes to cling to flat surfaces. In their paper published Science Robotics, the team describes their adhesive, how well it works and possible applications. Geckos are famous for their ability to walk up flat surfaces such as glass with little apparent effort—this ability has fascinated scientists for many years, inciting some to attempt to replicate the ability with various sticky-type materials.

To date, there has been some success but most techniques require the use of heat or electronics to get the materials to adhere and let go on demand. In this effort, the researchers report on a type of adhesive that can be switched on and off simply by shining a UV light on it. 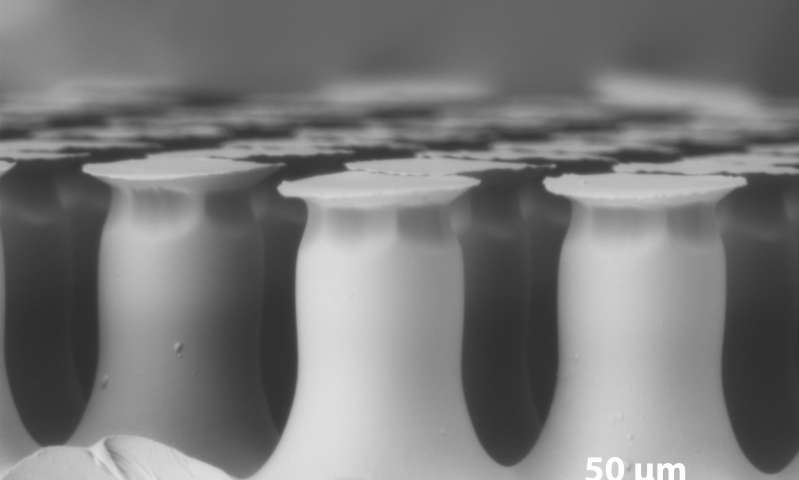 The adhesive is a three-layer tape—on top are mushroom-shaped pillars with sticky flat tops that actually touch the surface of the target material, i.e., glass. The pillars are embedded in a layer of polydimethylsiloxane, which is in turn connected to a layer of azobenzene liquid crystals.

At the bottom, there is another layer of polydimethylsiloxane. The adhesive works because the azobenzene crystals are sensitive to UV light—they change position relative to one another when a UV light is aimed at them. 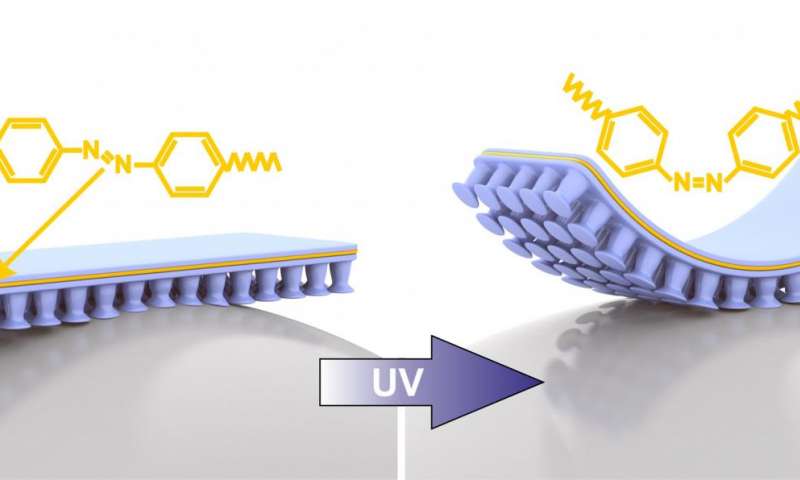 Inspired from gecko toes, these cylindrical microstickers have a remarkable ability to “switch off” stickiness when flashed with UV light. Credit: Carla Schaffer / AAAS

The team tested their adhesive by causing it to cling to and release from glass spheres, slides and even Eppendorf tubes, which they note are much larger than the adhesive used to hold them. They suggest it might be possible to hoist objects as heavy as a human being.

The researchers suggest their adhesive, which they have named bioinspired photocontrollable microstructured transport device, might have industrial applications such as moving glass slides, test tubes or even electronic pieces. Besides the advantage of not requiring heat, the adhesive also leaves no residue, ensuring a clean working environment.