Our website is made possible by displaying online advertisements to our visitors. Please consider supporting us by disabling your ad blocker.
Home > Products > The democratisation of space communication
Communications

The democratisation of space communication

Many engineers of a certain age may fondly remember the first transatlantic television pictures sent via the Telstar satellite.

Exactly 60 years ago, in July 1962, the early grainy images transferred seem very ancient by today's broadcast standards. Telstar and the communication satellites that followed initiated a surge in space communication. Today, the Earth is surrounded by thousands of satellites performing everything from remote sensing for volcanic activity, to internet service provision, international phone calls, weather forecasting, and private data networks.

This short article by Mark Patrick from Mouser Electronics delves into space communication systems, previews some typical applications, and showcases some low-cost equipment you can experiment with to communicate skyward.

Space communication – from Telstar to CubeSat

Unlike the formative years of satellite communication, developing a satellite and putting it into an Earth orbit is less expensive and complicated. Secondary education establishments, colleges and universities all have the opportunity to share in the creation of a CubeSat and piggyback on launch services provided by NASA and other emerging commercial space exploration organizations. To better define the rapidly-growing use of small satellites, European satellite development company Alen Space worked with leading space institutions to categorise them. A CubeSat measuring 10cm x 10cm x 10cm and weighing no more than 1.3kg sets a 1U nanosatellite benchmark.

According to the Nanosatellite Database, a privately run space research organisation, the growth of nanosatellites by companies and academic institutions far exceeds those by government-funded space agencies (Figure 1). 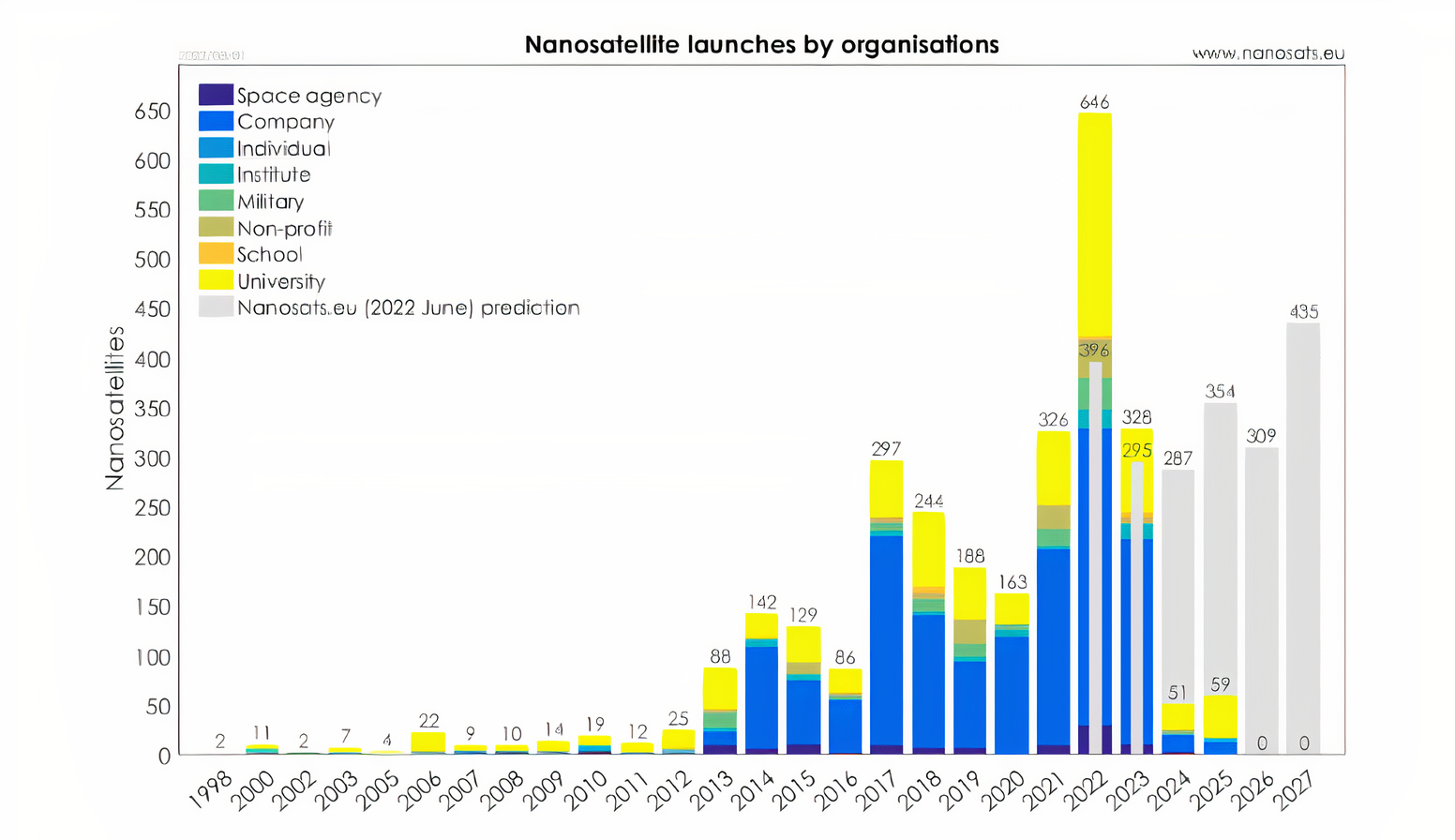 Regarding the size of nanosatellites launched, they are reasonably evenly spread (Figure 2), and a new category, a picosat weighing between 0.1kg and 1kg, is also emerging. 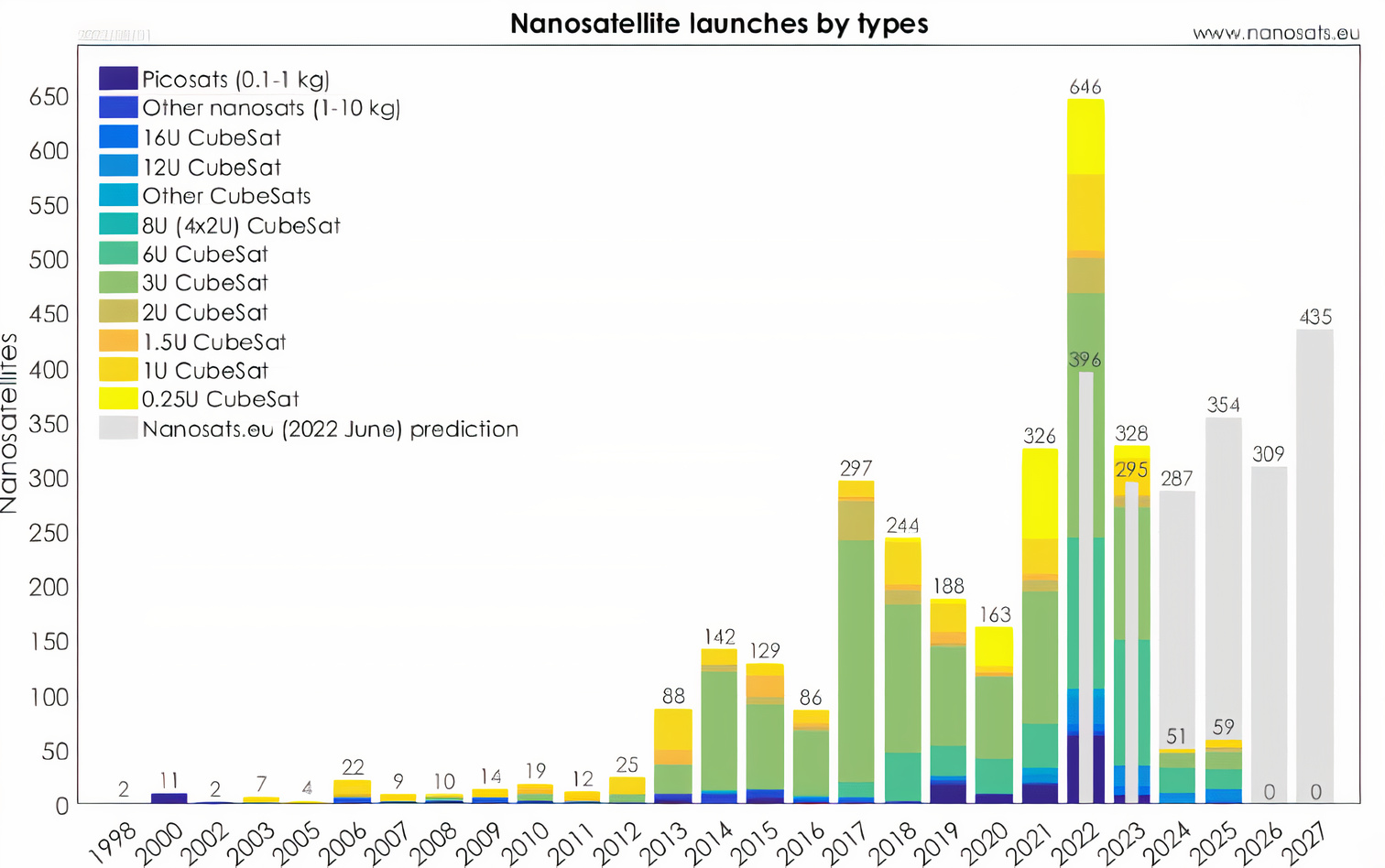 Getting started with space communication

There are many ways engineers and innovators can explore and engage in space and satellite communications. Those contemplating a career in this field may join a university programme such as those run by Warwick University or the University of Surrey's Surrey Space Centre. Satellite design and operation require a broad mix of skills, with a range of specialist disciplines from RF engineering to astrodynamics. For university students with no previous involvement with satellites, the European Space Agency (ESA), in August 2022, ran its first ESA Academy CubeSat summer school.

Centres of space communication excellence are also emerging to fulfil the need for agile commercial organisations to run satellite ground stations and globally co-ordinate deep space communications. An example is the Goonhilly Earth Station, the European site that received the first broadcast TV pictures from the Telstar satellite.

More modest involvement with space communication is relatively easy to achieve using readily available software-defined radio (SDR) hardware and open-source software such as SDR Console and GNU Radio. Open-source community examples include MyriadRF, where hardware and software resources combine, and well-documented projects are curated. MyriadRF aims to build a community that works together to make wireless innovation accessible to as many people as possible.

Innovators active with simple SDR-based implementations include radio astronomers and amateur radio stations. The global amateur radio satellite community, AMSAT, launched their first satellite, OSCAR, in 1961. Since then, AMSAT has launched over sixty satellites, of which twenty are in operation. Equipped with an SDR receiver and a high-gain Yagi or dish antenna, it is possible to receive signals from the AMSAT QO-100 satellite relay transponders. AMSAT fitted the QO-100 communications equipment to the geostationary Es’ hail 2 satellite launched in 2018.

For radio astronomy, SDR receivers are a convenient, low-cost way of researching everything from hydrogen line variations to magnetic anomalies and searching for signs of extra-terrestrial life.

Experimenting with an SDR-based satellite receiver is achieved with one of the low-cost ready-to-use SDR modules such as the Analog Devices ADALM-PLUTO and one of the LimeSDR evaluation boards.

The two LimeSDR evaluation boards are the LimeSDR and the LimeSDR Mini (Figure 3). They incorporate the Lime Microsystems LM7002M field-programmable RF transceiver IC. 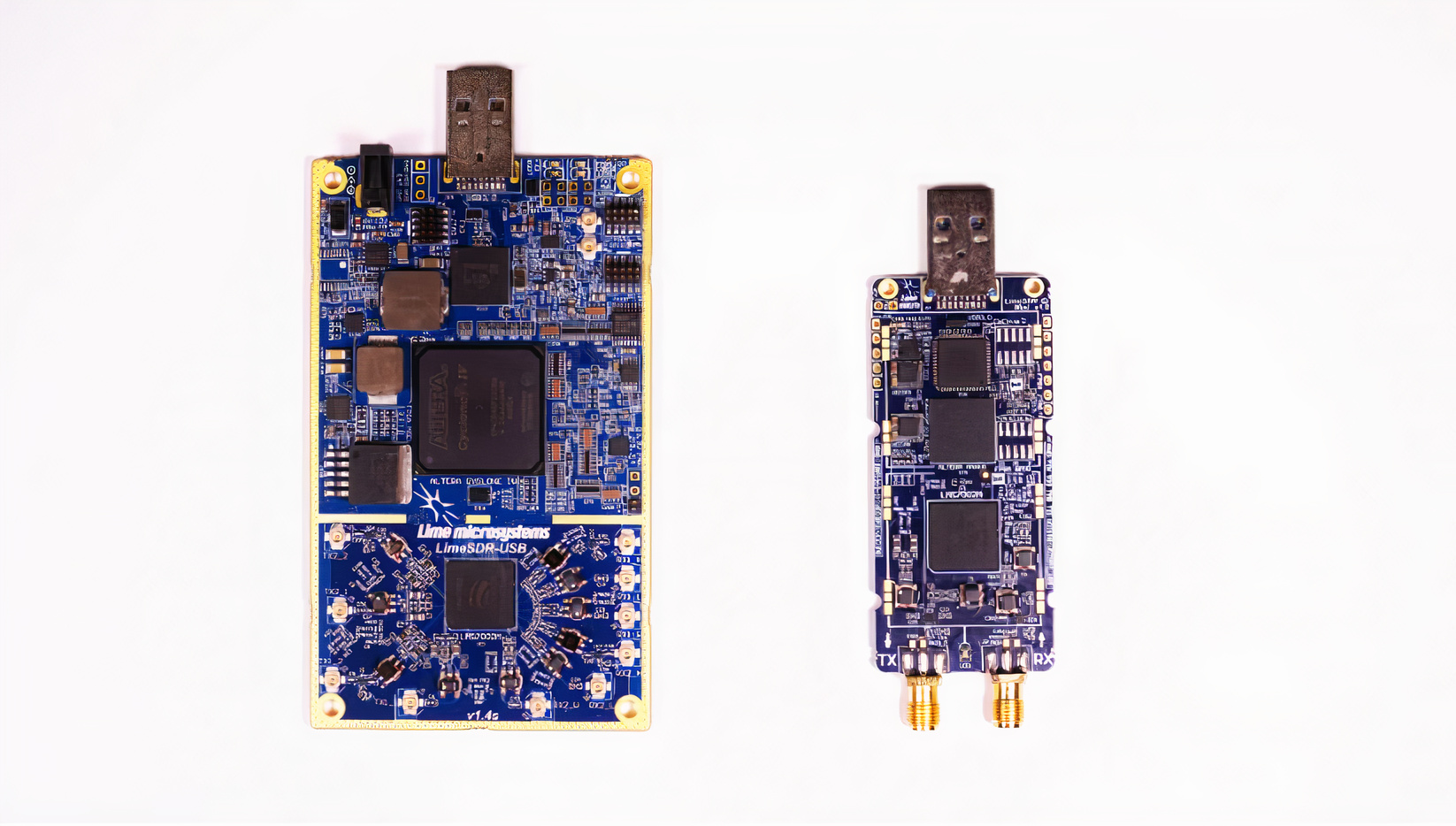 Capable of operating continuously from 100kHz to 3.8GHz, the LM7002M features dual transceiver paths, is capable of full duplex and time-division duplexing operations and supports a programmable RF modulation bandwidth of 160MHz. The boards are suitable for prototyping a broad range of software-define radio applications from IoT and machine-to-machine (M2M) networks to small cell radio communication to receiving weather satellite images. Radio astronomy, media streaming and drone command systems are some other examples of use cases.

The boards also incorporate an Intel Altera Cyclone IV FPGA, 256MBytes of DDR2 SDRAM, and a Rakon RPT7050 oscillator. RF power output is up to +10dBm, and the boards have six receiver channels and four transmitter (two for the LimeSDR Mini) paths. Figure 4 illustrates the high-level functional architecture of the LMS7002M FPRF transceiver IC. 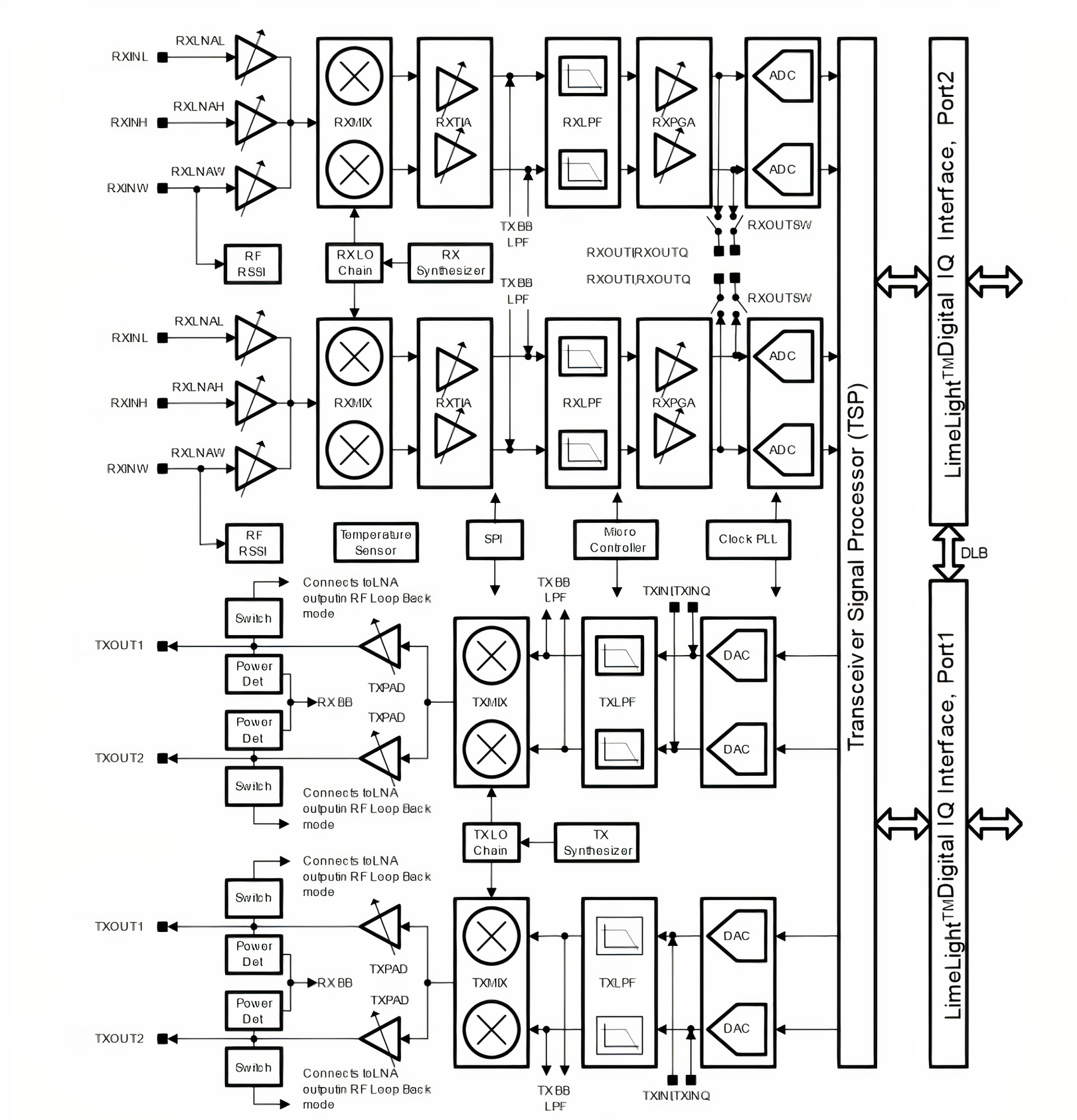 The USB-based Analog Device ADALM-PLUTO is a complete SDR module and RF engineering learning platform. It provides a single receive path and a single transmit path and can perform half or full duplex operation. The continuous RF range is from 325MHz to 3.8GHz, with a maximum instantaneous bandwidth of 20MHz. It is a cost-effective RF prototyping platform that can be incorporated into a more extensive project or be used stand-alone in a lab test and measurement environment. The ADALM-PLUTO (Figure 5) contains an Analog Devices AD9363 highly-integrated RF transceiver IC and a Xilinx Zynq Z7010 FPGA. 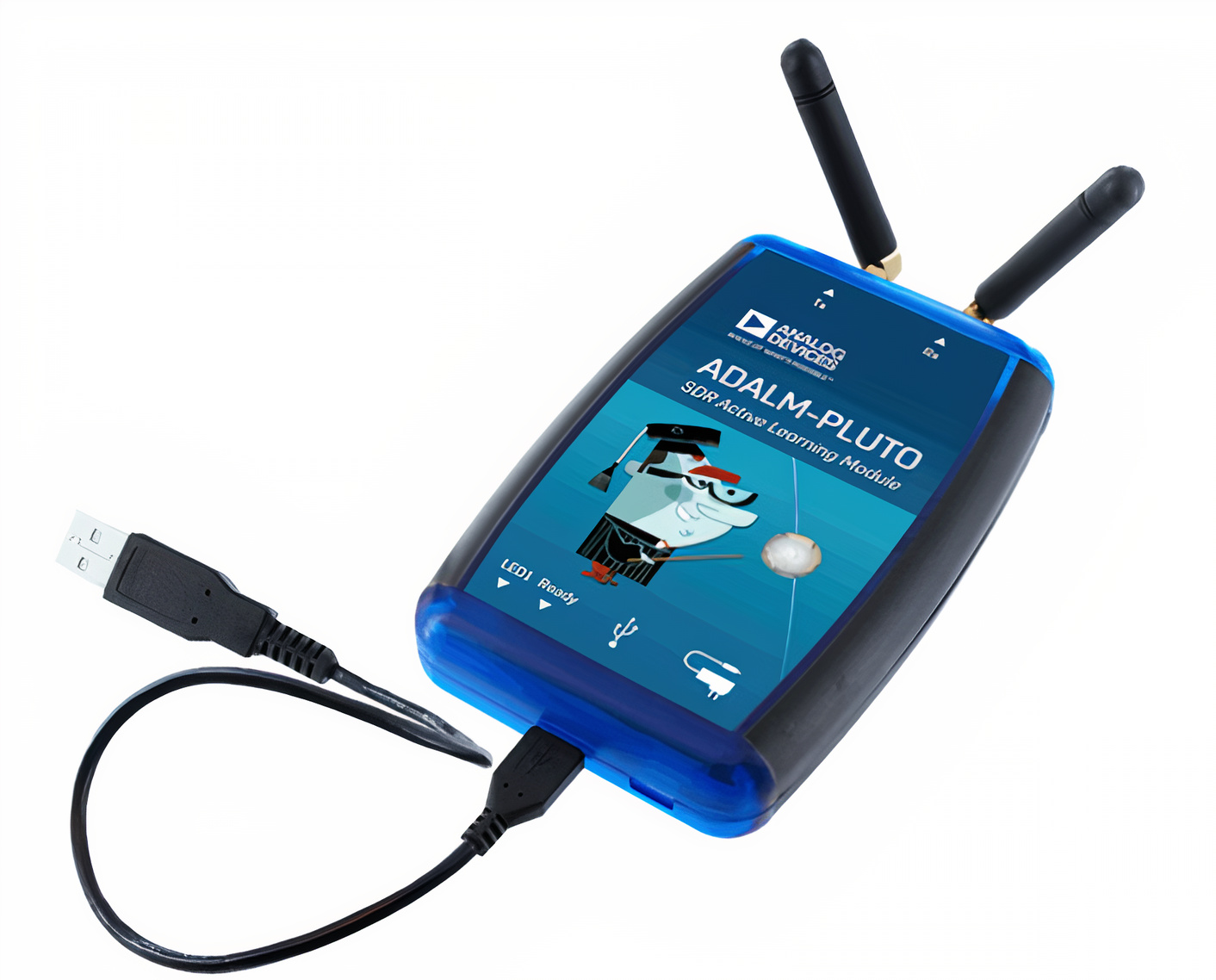 In addition to benefiting from comprehensive open-source SDR software support, the ADALM-PLUTO can also be accessed via MathWorks MATLAB programming language and Simulink simulation software. These engineering tools extend ADALM-PLUTO's reach into analysis, research, and model-based design use cases. 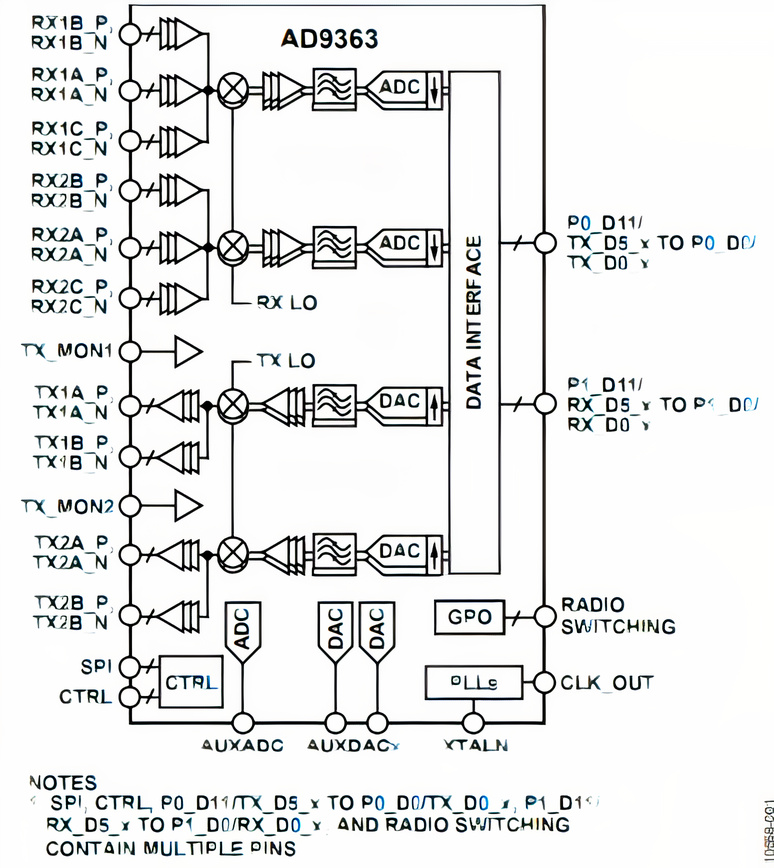 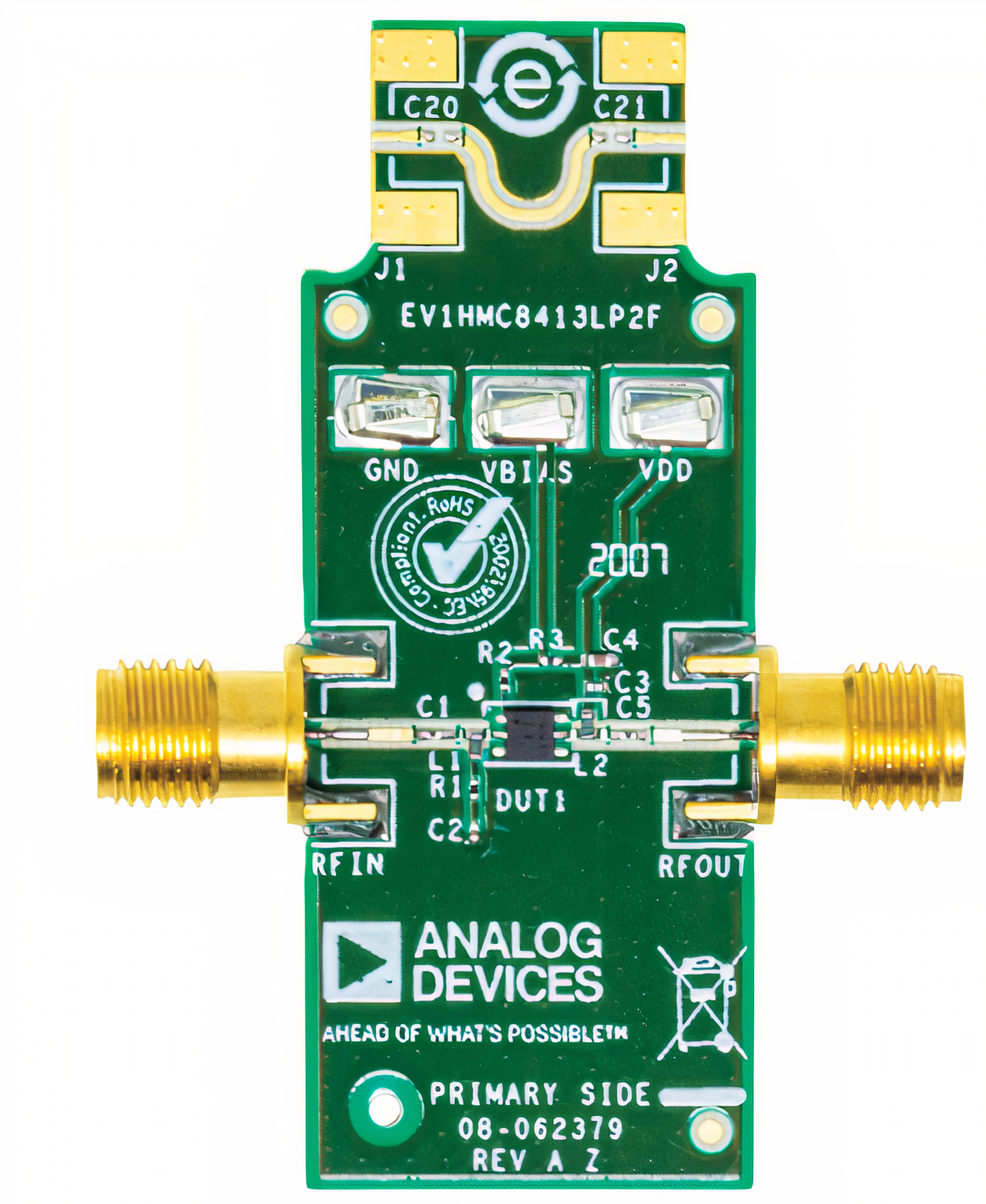 This short article has highlighted how innovators and electronics engineers can explore satellite communication. The access to low-cost, flexible, and well-supported SDR modules and kits, together with a wide range of open-source software tools and communities, make it easy to prototype your first project.