Is winter coming for Fieldbus?

It’s been nearly 20 years since the Fieldbus war ended. A 'Memorandum of Understanding”, the closest thing industrial automation has ever come to an Entente Cordiale, was signed July 16, 1999, by some of the loudest voices in the debate including Siemens, Rockwell Automation and Fisher-Rosemount, putting an end to years of fighting over who’s version of Fieldbus should be adopted in the draft IEC 61158 standard - the European standard that aimed to set interoperability for industrial communication networks.

The large and comprehensive IEC standard was released the following year that accommodated all their competing Fieldbus systems - eight different protocol sets called 'Types' were agreed. For the companies involved in the memorandum it was worth the battle to protect these investments, as the industrial communication market is now expected to reach USD 141.0 billion by 2023, according to a MarketsandMarkets global forecast.

However, the many competing technologies for Fieldbus meant the original hope for one, single unified communications mechanism was never properly realised. In part, this was simply not practical, since Fieldbus technology needs to be implemented differently in different applications, e.g. automotive Fieldbus is functionally different from process plant control, but also the development paths differed. Despite each technology sharing the generic name of Fieldbus the various Fieldbus are not readily interchangeable. The differences between them are so profound that they cannot be easily connected to each other.

Fieldbus basics
Fieldbus is a way to connect and control in real-time a network of field devices - sensors, actuators, motors, switches, drives, etc, within a manufacturing plant. Self-evidently, it comes from two terms, Field and Bus, where the Field represents the plant levels and the Bus is the connections (circuits) between units which transfer the data. Prior to Fieldbus, point-to-point parallel wiring was used to connect devices, but increasing amounts of automation necessitated higher levels of wiring complexity and cost, which also led to more human error.  Fieldbus gradually replaced these point-to-point links between the devices and their controllers (like PLC's, CNC's …etc.) with a digital single link on which all the information is transmitted in serial.

A set of rules is defined in order to accomplish data transfer between the units along the bus - called the Protocol. The protocol is responsible for two important rules on the bus, the mechanism that any unit can acquire or seize the bus (from the network terminology this means the way of Medium Access), and the synchronisation between those multi-units on the bus.

Devices are wired together using a single ‘trunk’ cable (typically a twisted wire pair carrying a digital signal and DC power) and communicate via the relevant Fieldbus interface and software. As the Fieldbus communicates only via a cable, it has been possible to decrease the wiring considerably in comparison to parallel wiring.

What are the alternatives?
Ethernet is widely used in home and industry. The internet protocol is commonly carried over Ethernet and so it is considered one of the key technologies that make up the Internet. As such, it’s everywhere. As the name suggests, Industrial Ethernet is the use of Ethernet in an industrial environment with protocols that provide determinism and real-time control. Ethernet’s steady march over the decade has found its way into various protocols. Of them, EtherNet/IP is now the most widely installed network at 15%, followed by PROFINET and PROFIBUS, both at 12%, according to the HMS Industrial Networks report. 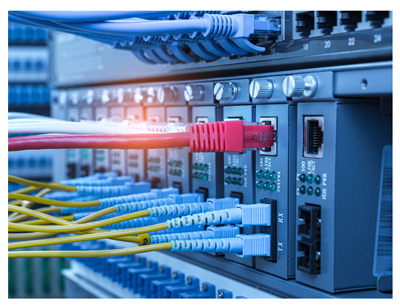 So is winter really coming for Fieldbus?
The majority of industrial components have historically been connected through serial Fieldbus protocols, such as PROFIBUS, Control Area Network (CAN), Modbus and CC-Link. PROFIBUS is the world’s most successful Fieldbus technology and is widely deployed in industrial automation systems.

The Fieldbus army is therefore still formidable and the systems are still indispensable within industry.

However, Industrial Ethernet has been growing faster than traditional Fieldbuses for a number of years and has now overtaken Fieldbuses, offering higher speed, increased connection distance and the ability to connect more nodes. With a growth rate of 22%, Industrial Ethernet now makes up for 52% of the global market compared to 46% in 2017, according to the report.

One significant difference between Fieldbus networks and Ethernet networks is speed. Standard Ethernet protocols achieves very low latency and enable a flexible network topology. As such, many industrial communication protocols are moving to Ethernet-based solutions. The real-time accuracy for Industrial Ethernet protocols, such as PROFINET and Ethernet/IP, is more accurate - about 1ms. This ensures specific manufacturing data is sent and received on-time – exactly when the data is needed to perform specific operations. Fieldbus systems were designed for the typically noisy plant environment, and as a result speed needed to be slower and of course a suitable physical media found, especially for those protocols in which data and power are in the same single cable.

Complexity and costs has been one of the major causes of decline. As a Fieldbus represents a complete system, qualified personnel are required for its use. The individual Fieldbus components are also considerably more expensive.

Any disadvantages?
The original aim of the introduction of the Industrial Ethernet was unification of the communication infrastructure from the guide level to the sensor/actuator bus. Unfortunately, exactly the opposite occurred: at present, the number of Ethernet solutions developed until now is even higher than the number of Fieldbuses. This makes a comparison of the different systems nearly impossible.

It might not be the Mother of Dragons, but fieldbus may have legitimate claim on the title of Mother of Communications Interfaces...