Multi-rate Ethernet is gearing up for demanding enterprise networks

Current Ethernet networks operating at 1Gb/s using a Cat5e/Cat 6 cabling infrastructure are rapidly turning into a roadblock for the rollout of feature-rich services across commercial and consumer networks, due to insufficient bandwidth capacities. Many existing networks are facing this challenge, as new devices designed for content-intensive services delivered through Cloud-based applications are introduced. Streaming content, such as HD video, is among the most challenging examples.

Current Ethernet networks operating at 1Gb/s using a Cat5e/Cat 6 cabling infrastructure are rapidly turning into a roadblock for the rollout of feature-rich services across commercial and consumer networks, due to insufficient bandwidth capacities. Many existing networks are facing this challenge, as new devices designed for content-intensive services delivered through Cloud-based applications are introduced. Streaming content, such as HD video, is among the most challenging examples.

While ripping up the existing Cat5e/Cat 6 cabling infrastructure and replacing it with 10GBASE-T technology would address this, it would also incur intolerably high costs, making it realistic only for Greenfield developments or comprehensive refurbishment projects. Fortunately, there is a technology that can improve the network speed of Cat5e/Cat6 cables, to deliver up to 5Gb/s at cable distances of up to 100m. NBASE-T solutions are now being deployed to offer content providers and consumers a low-cost migration path to multi-gigabit transmission rates.

This article outlines the background of the NBASE-T specification before taking a look at the important role of magnetics in LAN system design, there will also be some thoughts on the choice of the ICM (Integrated Connector Module) as a key consideration in the design of LAN devices.

As a concept for data exchange over a cable network, Ethernet dates back to the early 1970s. Since then, Ethernet bandwidth has increased by leaps and bounds, driven by the equally rapid development and the evolving demands of local-area computer networks. Originally limited to a modest 10Mb/s, Ethernet has evolved in several generational steps including Fast Ethernet (100Mb/s), Gigabit Ethernet (1Gb/s) and 1000BASE-T.

The cabling standards have also evolved, to support these speeds, from co-axial cable configurations to unshielded twisted pair, to Cat5e and Cat6. These implementations represent much of the installed base in today’s offices and campuses. However, new communication devices and services like wireless access points, as well as the rapid expansion of video content and cloud applications, are all pointing towards even higher bandwidth than the 1Gb/s offered by 1000BASE-T-based networks.

10GBASE-T or 10 Gigabit Ethernet is defined in the IEEE 802.3ae-2002 Standard, which specifies the technologies necessary to support transmission of Ethernet frames at rates up to 10Gb/s. The introduction of 10GBASE-T went been more gradual than previous revisions. This was a consequence of the increased cost per port but also due to the fact that the Cat5e/6 cable infrastructure does not fully support the standard. This means moving to 10GBASE-T requires the additional and not insubstantial cost of upgrading the existing infrastructure to Cat6A.

For this reason and to achieve some progress in the ongoing bandwidth discussion, the major players in this field, such as Cisco, Aquantia, NXP and Intel, formed the NBASE-T Alliance in 2014. The aim was to accelerate the introduction of specifications for intermediate transmission speeds – 2.5GBASE-T and 5GBASE-T. The IEEE did its part in ratifying the NBASE-T specifications as the newly minted Standard IEEE 802.3bz.

NBASE-T also incorporates a downshifting feature to allow devices to maximise the link speed in real time by stepping down the speed of 10G, to 5G or 2.5G. This is effective when the noise in the system gets too high. NBASE-T devices can negotiate between themselves to set the best speed possible on the network, which would be either NBASE-T, 100Mb/s, 1Gb/s, or even 10Gb/s if the infrastructure provided can bear it.

An important feature of NBASE-T is that it supports PoE (Power-over-Ethernet). PoE is becoming fundamental in enterprise networks and for building infrastructures such as airports, shopping malls and sports stadiums. All the PoE standards are covered within NBASE-T, as the technology also offers provisions for handling the different power ranges encountered by a device due to varying link speeds within the cable bundle. This new standard enables enterprise users to leverage their cable investment, as Cat5e and Cat 6 installations can now be used with devices that conform to IEEE 802.3bz.

The devices that may be connected using Ethernet network cables within homes, offices and campuses include switches, wireless access points, base stations and security cameras. They comprise a PHY, or Physical Access; a component to implement the physical layer portion of the Ethernet standard used: 10GBASE-T, NBASE-T, 1000BASE-T, 100BASE-TX, and 10BASE-T. A block diagram of a typical PHY is given in Figure 1. It depicts a device based on the DP83822 10/100 Ethernet PHY transceiver chip from Texas Instruments.

The large part of the functionality delivered by the PHY is digital. The exception is the analog circuit depicted as “magnetics” in Figure 1, necessary to meet the interface requirements of IEEE 802.3 10/100/1000BASE-T. The magnetics address key electrical features such as electrical isolation, signal balancing, common-mode rejection, impedance matching, and EMC. In this regard, the magnetics circuitry is critical for the operation of the PHY.

ICMs (Integrated Connector Modules) incorporate all of the required magnetic components within the connector, which saves space on the PHY board and it avoids mixing digital and analogue circuitry on the same chip. With transmission speeds reaching 10Gb/s, any design flaws or physical imperfections in the board layout become apparent. Differential pair mismatches will also be highlighted and may introduce EMI issues (Electro-Magnetic Interference), which can lead to the module failing the necessary EMC (Electro-Magnetic Compatibility) requirements.

An ICM is therefore a critical component and the choice of a LAN magnetic component that delivers proper performance and good EMI suppression can be crucial when controlling EMI emissions and susceptibility. At ever higher transmission rates the LAN magnetics have become increasingly complex, so LAN system designers must be careful to choose quality magnetics components from a well-known magnetics manufacturer, such as Bel.

As the inventor and largest supplier of ICMs, Bel offers the broadest portfolio of products on the market. The portfolio includes a recently released range of 2.5GBase-T ICMs (Figure 2), including the 0826-1X1T-HT-F, 0826-1X4T-HT-F and 2250331-1 models. These connectors can implement 2.5GBase-T to nearly double the speed and bandwidth of existing products, to achieve a speed of up to 6.9Gb/s but at about the same cost as current 1GBase-T solutions. 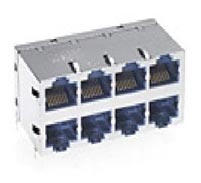 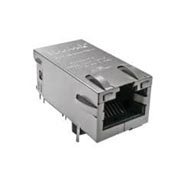 Another important consideration is that the Bel Magnetics ICMs meet the PoE standard for transmitting and receiving power from 0-60W. The same applies to all the electrical requirements of IEEE 802.3 from 10/100Base-T through to 2.5GBase-T parameters, including RL, IL, common-mode and 100% Hi-pot tested. These ICMs are laid out in an industry standard footprint and pin-out, making them pin-to-pin/footprint compatible with older 1GBase-T products, enabling customers to upgrade their products without changing their board layouts.

Among the typical applications are base stations, security cameras, industrial control equipment, video displays and wireless access points for 802.11ac WiFi. The connectors are available in various different LED colour combinations and options, also with 30 or 50 micro-inches of gold-plated contacts and in several mechanical options.

There is a move afoot to upgrade the existing Cat 5e and Cat 6 cabling installations to make them suitable for higher data rates, offered within the NBASE-T specifications. Switches and NAPs can be replaced with their NBASE-T equivalents to extend the useful life of existing in-building cabling infrastructures.

However, NBASE-T LAN systems can be more sensitive to EMI disturbances, so good design practices are key to ensuring system performance. LAN magnetics are critical components when it comes to lowering EMI disturbances, so selecting a high quality ICM from an experienced supplier such as Bel Magnetic Solutions is crucial. Bel is a global leading supplier of ICMs for networking and telecom applications and has recently introduced a new series of connectors which provide an upgrade path to NBASE-T at minimal cost.