How are professionals benefiting from 3D printing?

One of the fastest-growing developments in the world of technology has been that of 3D printing. It is the process of depositing successive layers of material (e.g. plastic, metal, wax) in a 3D printer, to create a physical object envisioned from a digital model. 3D printing technology has already been heavily adopted in industries like aerospace, automotive and industrial goods.

With organisations in these respective industries utilising 3D printing for aspects such as making those parts/components that cannot be manufactured through conventional machining or laser processing techniques.

Case24 found that professionals are most commonly using 3D printing for prototyping (55%) – well suited for tangibly showcasing a prospective model/concept and then, getting instantaneous feedback on its design as well as functionality.

Thereafter, 43% are applying the applications of 3D printing within their production process. In third position, 41% of experts believe 3D printing allows them to prove that the concept of a potential product/component works to its desired and expected effect/output.

Interestingly, 18% of professionals are using 3D printing to produce valuable marketing samples. Slightly below, 16% are equally deploying 3D printing for artistic as well as educational purposes.

Opposingly, ten percent consider 3D printing as a hobby, an area of their job that they can experiment with and test out, when not focusing on the principle aspects of their role/responsibilities.

Furthermore, Case24.com also sought to identify from the report what the professionals’ thought were the biggest benefits they have gained from implementing 3D printing technology.

Case24.com discovered that complex geometries (48%) is the greatest benefit professionals have experienced from 3D printing. Complex geometries referring to those models which are typically difficult to imagine but can easily be generated with a 3D printer. 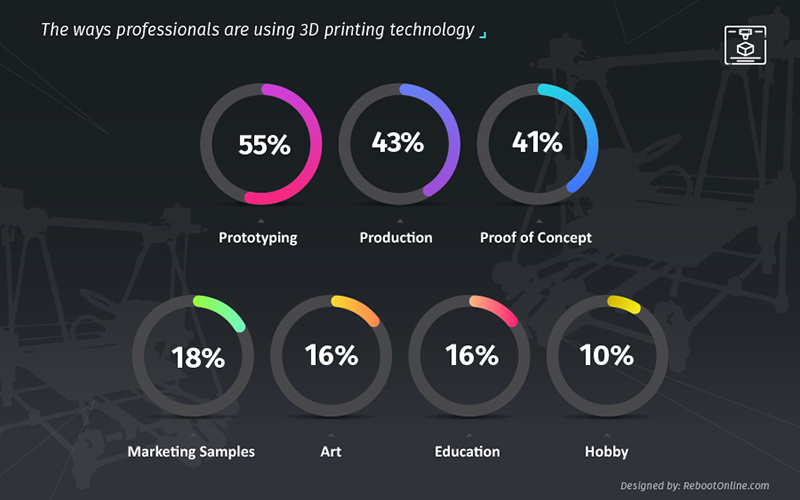 Subsequently, 39% reported 3D printing beneficially led to a fall in the lead times of their production process. 30% stated installing 3D printers has made their operations financially more prudent. Perhaps unsurprising, as 3D printers can make models multiple times with just the materials required – thus, not only decreasing turnaround times but unnecessary spend on materials.

Fascinatingly, 28% of experts believe 3D printing has been advantageous to their engineering redesign function. Whilst 22% place 3D printing as the primary attribute which has enabled them to reduce the number of steps in their assembly line.

Given many organisations drive to constantly achieve efficiency where and when possible, 18% think 3D printing has aided their continuous improvement ideology. 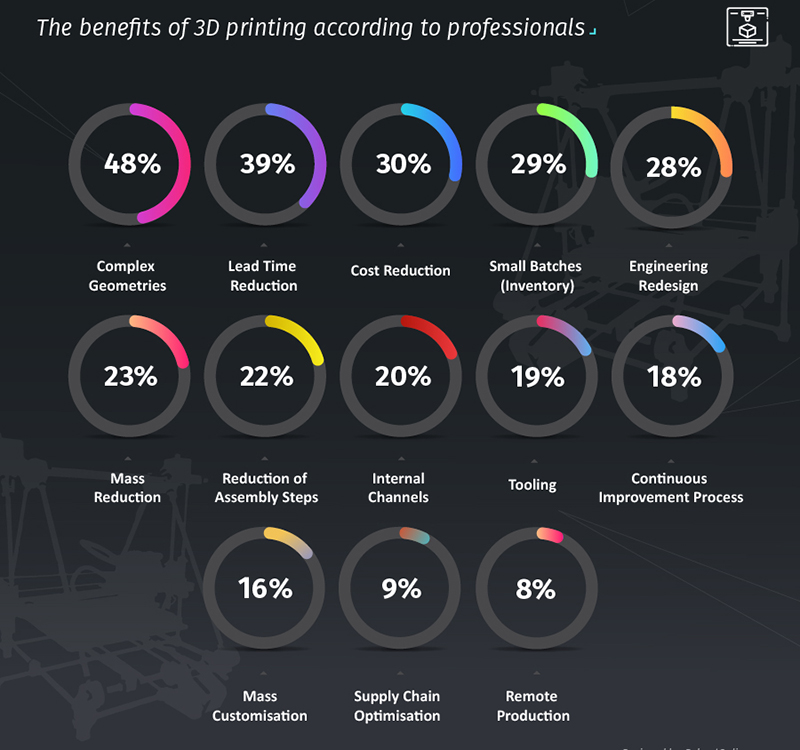 Contrastingly, a mere eight percent feel 3D printing has had a positive impact on their remote production capabilities. Just above, nine percent cite the utilisation of 3D printers as an important factor in them successfully achieving supply chain optimisation.

Phillip Donker, the Managing Director of Case24.com, commented: “3D printing has significantly evolved over the years, establishing itself as a ground-breaking piece of technology. Considering the technology is being harnessed in a large variety of sectors, it has become integral for firms consistently seeking to innovate and make efficiency gains in their production cycle.

“This research provides a comprehensive insight into the different way’s professionals are using 3D printing and the biggest benefits they are gaining from doing so. These indicators showcase the current influence of the technology and how 3D printing is allowing companies/professionals to develop a powerful competitive advantage.”