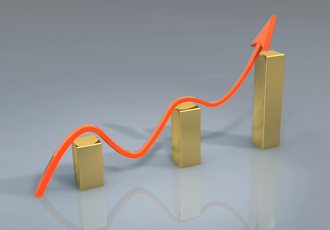 The 30-page October update to IC Insights' McClean Report will include a detailed analysis of the company’s revised forecasts for the IC, O-S-D, and total semiconductor markets through 2021. IC Insights has raised its IC market growth rate forecast for 2017 to 22%, up six percentage points from the 16% increase shown in its Mid-Year Update. The IC unit volume shipment growth rate forecast has also been increased from 11% depicted in the Mid-Year Update to 14% currently.

As shown below, a large portion of the market forecast revision is due to the surging DRAM and NAND flash markets.

In addition to increasing the IC market forecast for this year, IC Insights has also increased its forecast for the O-S-D (optoelectronics, sensor/actuator, and discretes) market. In total, the semiconductor industry is now expected to register a 20% increase this year, up five percentage points from the 15% growth rate forecast in the Mid-Year Update.

At $72bn, the DRAM market is forecast to be by far the largest single product category in the semiconductor industry in 2017, exceeding the expected NAND flash market ($49.8bn) by $22.2bn this year. As shown in Figure 1, the DRAM and NAND flash segments are forecast to have a strong positive impact of 13 percentage points on total IC market growth this year. Excluding these memory segments, the IC industry is forecast to grow by nine percent, less than half of the current total IC market growth rate forecast of 22% when including these memory markets. 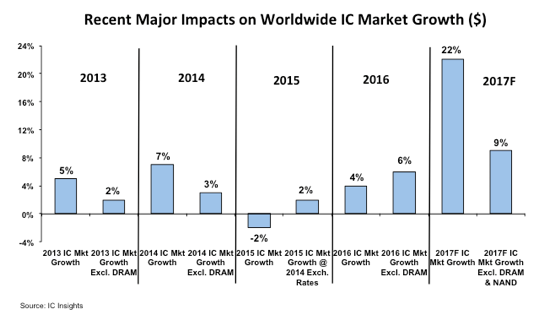