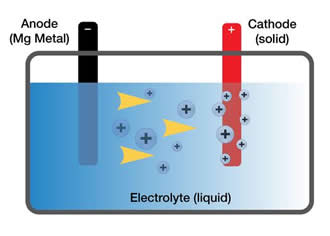 For anyone who’s ever panicked when their mobile device chirped, “low battery", the future could be far less stressful, thanks to the advanced battery research of scientists at the Toyota Research Institute of North America (TRINA). A breakthrough involving magnesium batteries may soon open the doors for smaller, longer-lasting batteries for everything from cars to cell phones.

Magnesium metal has long been theorised as a much safer and more energy-dense alternative to current lithium battery technology. Lithium metal, in its natural state, is unstable and can ignite when exposed to air. In order to make lithium metal safe for batteries, ions are taken from the lithium metal and embedded into graphite rods, which are then used in batteries. That lack of actual metal, however, limits the amount of power a battery can store. Magnesium, on the other hand, is a very stable metal with the potential to store much more energy. But until now, research on magnesium-based batteries was limited because a magnesium-friendly electrolyte did not exist.

Enter Toyota principal scientist and chemical engineer Rana Mohtadi. Mohtadi was researching hydrogen storage materials and their application to fuel cell technology; upon hearing her fellow researchers discussing the challenges of developing an electrolyte for a practical magnesium battery, Mohtadi realized her hydrogen storage material might just solve the longstanding problem. With further experimentation and the help of fellow researchers, her theory proved correct.

“We were able to take a material that was only used in hydrogen storage and we made it practical and very competitive for magnesium battery chemistry,” said Mohtadi. “It was exciting.” Just as exciting as the discovery itself is how Toyota’s culture of diversity and collaboration played a key role.

“The results really speak to the strength in our group,” said Energy Storage Group Manager Paul Fanson. “We try to put people from diverse backgrounds and diverse technologies together and allow them to collaborate. This is a great example of that working very successfully.”

While it’s easy to get caught up in the potential of a dramatically improved battery, it could take 20 years of research and development before magnesium batteries reach the consumer market. To help move the process along, Toyota’s scientists aren’t keeping their discovery to themselves. Fellow researcher Oscar Tutusaus, who collaborated with Mohtadi on the discovery, said, “We want to make this electrolyte a standard for magnesium batteries… and we want other researchers to develop it further so these batteries can see the light of day.”