WWI tank replicated and celebrated as a centenary tribute

The EXCAVATOR giant JCB together with TV personality, Guy Martin engineered a tribute to all the tanks who played a helping role in changing the course of the First World War. Now the story of the tank’s role and its modern-day recreation will be told in a Channel Four documentary ‘Guy Martin’s WW1 One Tank’ on Sunday, 19th November at 8pm.

The truck mechanic and TV presenter came up with the idea of producing a replica of a 30-tonne Mark IV tank to mark the centenary of a battle in which they were first deployed.

And he turned to JCB’s engineers and welders to help turn his dream into reality in time for the special anniversary.

They rose to the challenge in double-quick time with the profile parts cut, rolled and bent into shape at JCB Heavy Products in Uttoxeter before being welded together at JCB’s World HQ in Rocester.

The huge team effort ensured the tank was operational and on display in Cambrai, Northern France on Armistice Day on Saturday, 11th November.

It was at this location - exactly 100 years ago - where the original Mark IV tank helped the Allies on the Western Front to make an unprecedented breakthrough at the Battle of Cambrai.

Guy Martin was given just five months to build an authentic reproduction of the 30-tonne tank from scratch and was quick to call on JCB’s engineering expertise. At more than 26 feet long and 10 feet wide, the 105 horsepower machine had a top speed of just 4mph.

Martin said: “When I first looked at this challenge, I thought ‘This is a big ask. We’re not going to see this happen.’ It is a massive undertaking and JCB was the main reason this was able to happen. They built the main part of the tank, and then the lads at the Norfolk Tank Museum put all the engine together. But JCB’s technology and knowhow was so important.

“As a challenge to build it, I’d say this is the biggest thing we’ve undertaken. There’s loads of stuff we’ve done – building push bikes to go at 100mph, converting transit vans to do 150mph, but this, I think, is the biggest one. It’s not that we’re restoring them, or modifying them – we’re building an exact replica of a Mark IV Fosters Tank, from scratch.

Working from 3D plans drawn up by a hobbyist modeller, employees at JCB’s World HQ used computer design technology and cutting-edge manufacturing techniques to recreate the chassis of the historic machine in just eight weeks. 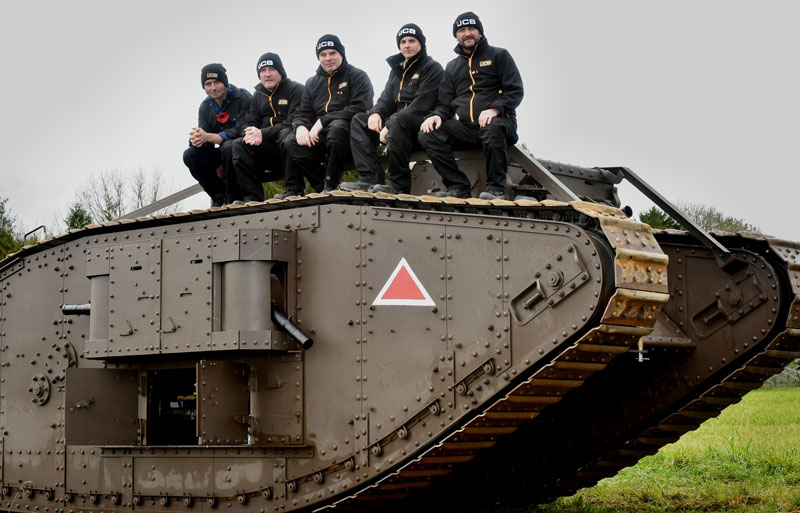 As a part of driver Guy’s crew, all four were invited to witness the tank they helped to build take part in a moving re-enactment of the moment 100 years ago that tanks first saw action in Cambrai.  They also took part in poignant commemorations in Cambrai.

Martyn Molsom said: “The reproduction of a Mark IV tank from a century ago is a great British manufacturing story and that’s one of the reasons we wanted to get involved in the project. Replicating that innovation in a few weeks was a massive task, but modern techniques and equipment made it a lot easier for us than it would have been back then.

“It was a fascinating project to be involved in, both from an engineering point of view and from the historical aspect, and I was delighted we could make it happen. I don’t think any other company in the UK would have been able to pull it off in such a short time-frame, so I’m proud that it worked out so well.”

The project to produce a replica chassis for the tank was led by Molsom, who revealed data from a Computer Aided Design (CAD) model had given the team a head start.

Molsom added: “A model maker from Germany had created a near-perfect CAD design of a Mark IV that was blown up in the Battle of Cambrai and had been buried there for over 70 years. That gave us a fantastic historical representation, but we had to adapt the design so it could be converted from a model into a real-life machine. The timescale involved made it a massive challenge, but we pulled in resources from different parts of the company and made it work.”

The manufacture of tanks during the early 20th century would have involved cutting, drilling and punching steel by hand using giant presses – requiring hours of manual labour and fair bit of sweat.

But things have changed dramatically in 100 years and, thanks to computer-controlled machinery, the team was able to use a 4,000W laser cutter capable of slicing through 15mm of solid steel to complete a similar process in minutes.

Sections of the hull, including the centre cabin and two rhomboid side panels, were built separately and welded together in just 20 days – a process that would have taken considerably longer in 1917.

Yet the team was keen to ensure the Mark IV looked entirely authentic and 3,000 fake rivets - used to join the original tank together - were attached to the replica using a robot welder.

Design engineer Tom Beamish said: “The manufacture of tanks was cutting-edge stuff at the time but looking back on it now, it barely seems possible with the equipment workers then would have had.

“We used modern techniques to rebuild the machine, but the biggest problem was to make it look as though it had just come off the factory line during the war. All of the welding work was done on the back side of the steel plates, so it wouldn’t be visible externally, but the specifications are exactly how they would have been back then. We even replicated the roller spacing for the tracks of the tank, so it would sound exactly the same as the original.”

Martin visited JCB’s World HQ during the early stages of production and was given a virtual reality vision of how the finished tank would look thanks to the company’s VR system.

Shenton said: “It was down to us to put everything together and there was a lot of welding work to be done very quickly. It was a tough task and I don’t think any other company could have done what we did. I’ve worked at JCB for 24 years and this is the biggest project I’ve been involved in, certainly with the timeframe involved.”

Welding shop colleague Chris Brennan, described the project as a ‘real team effort’. He said: “The project was a huge challenge, but we had a small team working on it throughout and the process came together very quickly in the end. Only four of us were involved from start to finish, but there were other people who gave us support and it was good to be a part of it.”

The completed chassis was transported to Norfolk tank museum, near Norwich, where the remainder of the project took place. Two ‘sponsons’ – projections extending from the side of the machine – along with a roof section and other parts, also manufactured at JCB, were lifted into place before a restored six-cylinder Rolls Royce engine, tractor gearbox, tractor axles and excavator tracks were fitted.

Martin’s original plan was to drive the tank in a Remembrance Day parade through the centre of his home-town Lincoln, where many of the Mark IVs were originally built. But when permission was refused, he came up with the idea of taking the machine to France to re-live the moment its distant ancestors rumbled into battle.

The two-hour Channel Four programme, which follows the entire rebuilding process, also looks at the impact made by tanks during World War One. Guy learns what life is like in a modern tank and, thanks to recordings made before they died, hears from men and women who crewed the ground-breaking British invention.

The replica tank itself will return to the UK and will remain at the Norfolk Museum. There it will form the centrepiece of an impressive World War One display and act as a lasting tribute to the brave crews who lost their lives in the conflict.