Home > News & Analysis > Will it be possible to monetise connected cars?
Analysis

Will it be possible to monetise connected cars?

Research into connected cars by Rethink’s Riot Research division has shown that consumers have little interest in connected cars. Some small number of consumers have shown interest - so far just under 16 million owners out of the 105 million plus cars which could buy services from a connected car, have actually committed monthly cash to the provision of services – under 16%.

Typically these spend between $99 a year and $200 a year (an average offering of around $165 or $14 a month) and the big four brands which have recruited the bulk of these customers are General Motors, Toyota, Volkswagen and Hyundai.

In the company's new report Monetizing Connected Cars - a multi-billion dollar, 7 year, loss leader, published on 27th January, Riot Research breaks down how future revenue in this market will be extracted, and it sees a contraction of services which the consumer pays for, replaced by revenues based around reselling data for each driver and car on the market.

What the report also reveals is that this market is rather like the smartphone market when smartphones introduced cameras and WiFi – no-one made any money directly out of doing so, but the brands which didn’t introduce those features lost massive market share at best or went bust at worst.

The rationale for the major 20 car manufacturers Riot Research tracked in this report is to sell data. The primary purchaser of data is seen as driver insurance companies, but also anyone, such as retailers interested in 'drive past' data and in car demographics.

Manufacturers are expected to absorb physical costs in the region of $2bn a year on BOM (Bill of Materials -See graph below) costs to build connectivity in to cars. But the biggest cost will be connectivity itself. Here car makers are expected to absorb a further punishing $11bn in connectivity costs, making the price of entry for the major car makers into the connected car just shy of $13bn. A completely different hardware BOM for V2X communication is expected to reach an additional $1.8bn to underpin safety services, bringing the bill for BOM plus connections to $14.7bn. 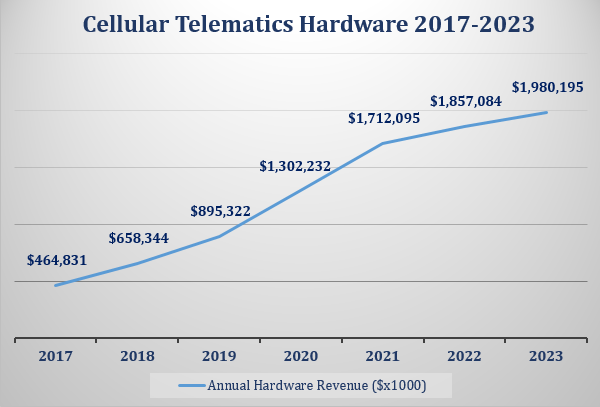 The payback today in 2017 comes in driver acquired services revenues, of some $2.6bn, but Riot Research sees this falling to just over $1bn by the end of its forecast in 2023, with 75% of that being spent in the US, and the remaining global driver community reluctant to part with payments for first generation convenience and security services, with the exception of in car consumer WiFi, which will still yield a premium and is expected to still be on the rise.

The real payback is sale of data – and Riot Research anticipates that even by 2023, this will not bring in quite enough fresh revenue to pay for all the costs and it will not be until 2024 at the earliest that car manufacturers can look at this market and breathe a sigh of relief.

Much of that data revenue will come from the insurance market, already held hostage by comparison websites which drive the margin out of car insurance and which charge affiliate revenues of around $50 per policy. The idea is that data about driving habits will replace comparison sites, with hard data that also leads to a combination of lower customers acquisition costs and lower still payouts for accidents as, near misses and over the speed limit driving will drive up insurance premiums.

Riot Research sees an eco-system of independent data resellers stimulating a lower risk, healthier insurance market, by driving up data sales from connected cars. The challenge for most of the car manufacturers is whether to take on the extra cost of making cars with cellular connections, and paying for the connectivity to gain driving and car performance data, which can only be monetised over time as an eco-system builds. On the other hand failure to get on board the connectivity bandwagon is likely to lead to market share losses and a weak position in subsequent data markets.