Home > News & Analysis > Why do only one in four Brits trust Alexa?
Analysis

Why do only one in four Brits trust Alexa?

“Alexa – Okay Google – Hey Siri” have become commonplace sayings with over a fifth of British homes now housing a voice activated smart speaker according to EY. This includes the incredibly popular Amazon Echo, as well as Google Home and Apple HomePod. However, the majority of Brits are still concerned about their privacy when using a voice assistant device.

In a recent survey of 1,000 British consumers, reichelt elektronik found that 72% are worried about how their data is being collected and used by big technology companies who own and analyse data from the voice assistant software. But should companies blame consumers for having these worries when the companies in question have been in hot water for listening in on private conversations?

They desperately need to win back trust as more than half of Brits believe these safety and privacy concerns must be addressed before the technology becomes more commonplace. Even those who already use these digital assistants are worried:

These concerns over lack of security and privacy could be a reason why only six percent of Brits are considering purchasing a smart speaker for their homes in the latter half of 2019.

Whilst security is the main concern, another factor for lack of interest in purchasing a smart speaker is that most Brits (63%) can’t see how useful the device could be in their home. This should be better communicated by brands if they wish to win over the public’s interest.

However, an interesting finding from our research is that the older generations are driving demand in the market. Ten percent of 45-54-year olds plan to buy a smart speaker in the next 12 months, which may show a better understanding from the older generation on how a smart speaker can make life easier for them. Retailers and the tech companies should be marketing more towards this group on how tasks like searching the web, shopping and listening to music and the news are all easy for them with a few voice commands.

Tech companies need to address these security concerns, or they risk losing the British people’s interest in smart speakers during this global voice assistant boom. There are many methods and devices consumers can use to improve their own personal security but the tech companies who build these smart speakers have a role to play too. If they can address the holes in security within these devices, the six percent of Brits on the verge of buying a smart speaker figure could be much higher. 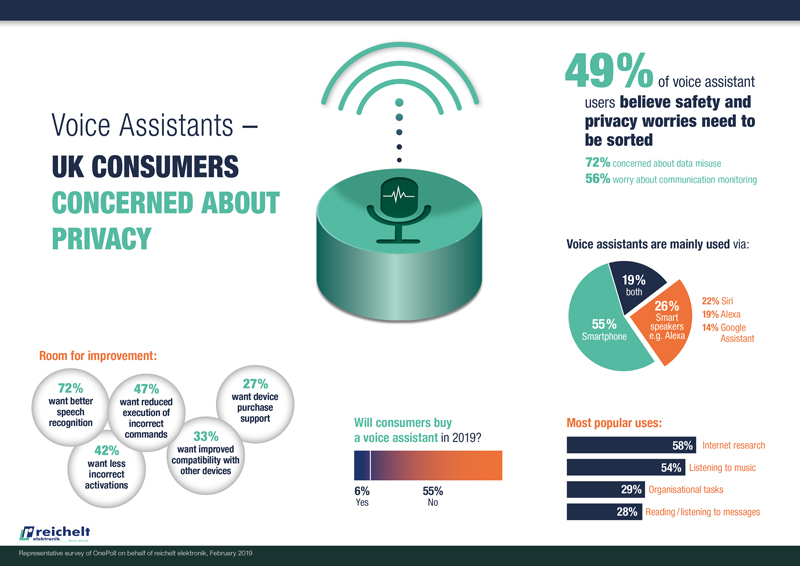