The 5th April saw young UK scientists compete at the Imperial College, London, in the UK Qualification round of The NXP Cup Challenge 2016. The Winning team and its two best contenders will compete at the European NXP Cup final in Munich, 9th-10th May.

Students from the team ‘LineRider’, from the University of Sheffield won the UK Final after a fierce competition that brought together six teams from UK universities. The NXP Cup, presented by NXP Semiconductors, is part of the company’s work to build a ‘Smarter Society’, a global initiative focused on the support of science, technology, engineering and maths (STEM) education, start-ups and incubators. The challenge, which has been in existence for the past 14 years, is aimed at university students across the globe. It presents them with an opportunity to experience and learn major concepts of mechanical, electrical and computing engineering technologies in a fun and competitive environment.

Student teams are challenged to build, programme and race an intelligent model car around a track. The car is autonomous and must stay on the racetrack at all times. The 180m2 racetrack consisted of speed bumps, intersections, hills and chicane curves. The fastest car to complete the course without going off the track wins the race. Cars are powered by a NXP 32-bit processor or microcontroller technology. The cars share the same chassis basis and use similar batteries.

For the final, each car had to run at high speed around the track. Each team had a maximum of three attempts to record a lap time during which, the first successful lap run qualified as the recorded time. 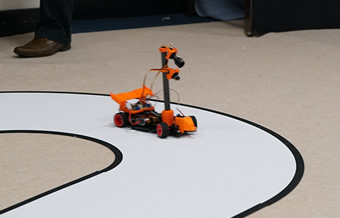 Students have been working for the past six months to assemble, programme and test their vehicles. They had six and a half hours to test and fine-tune their vehicles before the decisive race. During the training period, students had to prepare their car’s ability to avoid exiting the racetrack, quickly accelerate and brake within a given distance.

The NXP Cup Challenge is reflecting the latest evolutions in the automotive industry, where advanced driver assistance systems are now heavily relying on processors and sensors technologies. For example, students had the ability to use up to 16 sensors, such as cameras, accelerometers and gyroscopes to make sure their car stays on the track.

The creation of this intelligent car requires students to demonstrate skills in the area of embedded software programming and basic circuit creation, as well as interfacing with a camera to navigate the car through the race course. In addition, students can use the default hardware or create their own motor control hardware and software to propel and steer their intelligent car.