The top-15 worldwide semiconductor (IC and O-S-D—optoelectronic, sensor, and discrete) sales ranking for 1H19 is shown in the table below. It includes six suppliers headquartered in the US, three in Europe, and two each in Taiwan, South Korea, and Japan. 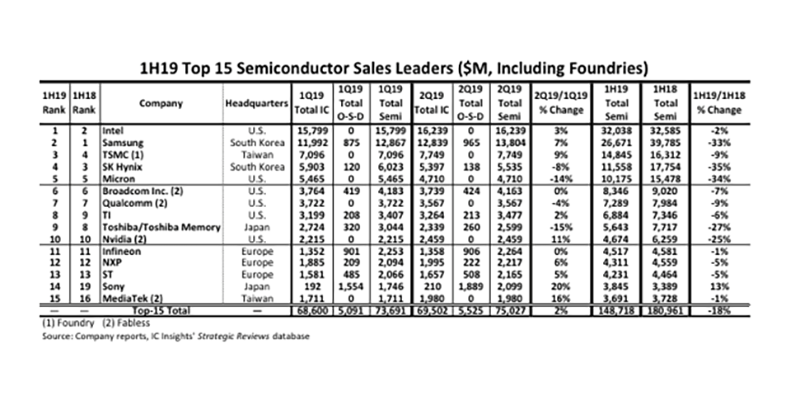 Intel replaced Samsung as the number one quarterly semiconductor supplier in 4Q18 after losing the lead spot to Samsung in 2Q17. While Samsung held the full-year number one ranking in 2017 and 2018, Intel is forecast to easily recapture the number one ranking for the full year of 2019, a position it previously held from 1993 through 2016.

In total, the top-15 semiconductor companies’ sales dropped by 18% in 1H19 compared to 1H18, four points worse than the total worldwide semiconductor industry 1H19/1H18 decline of 14%. Illustrating the extremely volatile nature of the memory market, the Big Three memory suppliers—Samsung, SK Hynix, and Micron—each registered year-over-year revenue declines of at least 33% in 1H19 after each company posted greater than 36% year-over-year growth one year earlier in 1H18.

Nine of the top-15 companies had semiconductor sales of at least $5bn in 1H19, one company less than in 1H18. As shown, it took about $3.7bn in first half sales just to make it into the 1H19 top-15 semiconductor supplier list.

There were two new entrants into the top-15 ranking in 1H19 as compared to 1H18. Fabless IC supplier MediaTek moved up one spot from 16th to 15th and IDM Sony, which was the only top-15 supplier to register year-over-year growth, jumped up five positions to rank as the 14th largest semiconductor supplier in 1H19. As shown, 90% of Sony’s total semiconductor sales are from O-S-D devices, primarily image sensor components for smartphones.

The 1H19 top-15 ranking includes one pure-play foundry (TSMC) and four fabless companies. If TSMC was excluded from the ranking, China-based fabless IC supplier HiSilicon ($3,500 million) would have been ranked 15th. HiSilicon’s sales surged 25% in 1H19 as compared to 1H18. However, since over 90% of HiSilicon’s IC sales are internal transfers to Huawei, Huawei’s “blacklisting” by the U.S. government is likely to slow HiSilicon’s sales growth rate in the second half of this year.

IC Insights includes foundries in the top-15 semiconductor supplier ranking since it has always viewed the ranking as a top supplier list, not a marketshare ranking, and realises that in some cases the semiconductor sales are double counted.

With many of our clients being vendors to the semiconductor industry (supplying equipment, chemicals, gases, etc.), excluding large IC manufacturers like the foundries would leave significant ‘holes’ in the list of top semiconductor suppliers. As shown in the listing, the foundries and fabless companies are identified. In the April Update to The McClean Report, marketshare rankings of IC suppliers by product type were presented and foundries were excluded from these listings.

Overall, the top-15 list shown in the table is provided as a guideline to identify which companies are the leading semiconductor suppliers, whether they are IDMs, fabless companies, or foundries.

Many of the major semiconductor companies have provided their sales guidance for 3Q19, which was discussed in more detail in the ‘August Update’. Overall, the 3Q19/2Q19 revenue growth expectations for the top-25 major semiconductor suppliers varies widely by company and currently spans a range of 23 percentage points, from +21% to -2%.