A non-destructive way to restore the oldest commercially available photographs in the world, daguerreotypes, to their former glory has been developed by researchers at Western University, creating a new scientific process and giving a fresh glimpse into the past.

Creating daguerreotypes involved using a polished slab of silver-coated copper approximately 7.5cm wide and exposing it to heated mercury vapour. The subject of the photography had to sit perfectly still for around three minutes, until the process caused an imprint to emerge on the surface of the silver.

Researchers at Western University Canada, led by Madalena Kozachuk, were given two daguerreotypes by the National Gallery of Canada, which to the naked eye were not even recognisable as having a photographic image impressed upon them. Kozachuk and her team the developed a system of using rapid-scanning micro-X-ray fluorescence imaging to identify how the mercury was spread over the silver.

Kozachuk explained the benefits of using a synchrotron: “We can get a further understanding of (daguerreotype) chemistry. Even though it was the first known photography, it is still not fully understood. There are differing opinions on how they have been produced, how to conserve them, and it’s tricky because not all daguerreotyping is the same. Daguerreotists had their own recipes and the chemicals they used varied.”

Using a synchrotron provides an accurate and detailed chemical layout of the daguerreotype, and closer analysis can reveal how the chemicals are bonded to the metal, which sheds light on what new methods of restoration could be developed. This method also has the perk of being non-invasive and posing little to no threat to the daguerreotypes, which is important because every daguerreotype is the only one of its kind, each photograph having only been taken once. 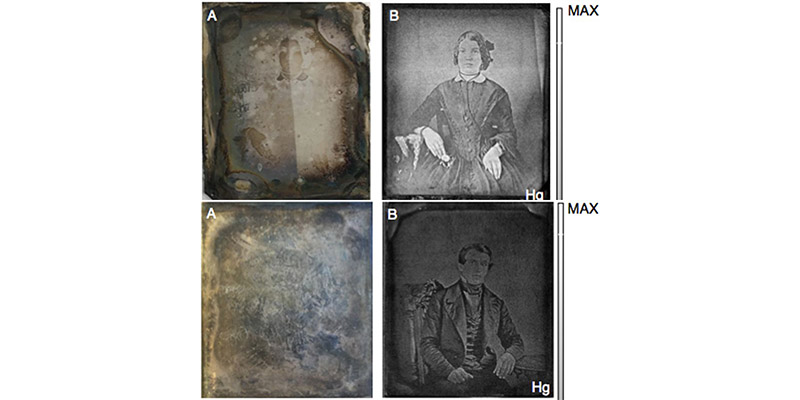 “Every time I put one in the synchrotron, it’s so exciting,” Kozachuk went on to say. “It’s nerve-wracking, as well, because you don’t want to mess up. I feel so grateful they trust me with this and I’m not established yet. It’s such a win-win. I get a PhD out of it and they get to further their understanding of how the daguerreotypes are chemically composed and the methods they can use in preserving them.”

Each daguerreotype took around eight hours to scan with an X-ray beam was as small as 10x10μm and used the energy most sensitive to mercury absorption. This new process is capable of both helping to restore the lost images on daguerreotypes and recreating the image that was there if restoration is not possible.

Tsun-Kong (T.K.) Sham, Western’s Canada Research Chair in Materials and Synchrotron Radiation and one of Kozachuk’s supervisors explained: “Mercury is the major element that contributes to the imagery captured in these photographs. Even though the surface is tarnished, those image particles remain intact. By looking at the mercury, we can retrieve the image in great detail.”

Despite being so old, when the images are restored through this method it becomes clear that this method of photography provided a highly detailed photograph. Kozachuk commented on the unexpected vividness of the images: “It’s somewhat haunting because they are anonymous and yet it is striking at the same time. The image is totally unexpected because you don’t see it on the plate at all. It’s hidden behind time. But then we see it and we can see such fine details: the eyes, the folds of the clothing, the detailed embroidered patterns of the table cloth.”

The recovery of these images and potential to restore thousands more daguerreotypes is not only demonstrative of a clever new scientific process, but also giving the historical community a new insight into the lives of people who lives almost two hundred years ago, making them the oldest images that do not take any artistic licence when depicting the subject.

Kozachuk and her team are continuing to refine their process and restore daguerreotypes in collaboration with the National Gallery of Canada.