Coming out on top in the annual competition for pupils across Scotland to put their underwater robots they have designed and built to the test, Keith Grammar School, clinched first place. The Scottish leg of the MATE ROV challenge, co-ordinated and hosted by Robert Gordon University (RGU), saw eight schools put their ROVs through a series of challenges at RGU Sport.

The Keith Grammar School team emerged victorious, after a panel of industry experts scored the teams on how well they completed the missions, as well as taking into consideration the technical reports, poster displays, and engineering presentations the pupils were required to produce.

Robert Gordon’s College placed second, with Portlethen Academy in third, while Keith Grammar also triumphed in the technical prize for safety protocol. Alford Academy was awarded the Encouragement for Future Development award and Inverurie Academy picked up the teamwork award.

It is one of 24 regional heats held around the world by the Marine Advanced Technology Education (MATE) Centre in California and will see Keith Grammar School travel to compete in this year’s international final which will be held at Long Beach City College in Long Beach, California.

Neil Gordon, Chief Executive of Sponsor Subsea UK, who attended the prize giving and handed over the award to the winning team, said: "As the body representing the country's subsea sector, it is important that we support the development of the next generation of subsea engineers.

“MATE ROV engages with students in a compelling way and uses marine technology to inspire and challenge them to think creatively in order to solve real-life scenarios. It empowers them to apply their STEM knowledge and skills to enhance their learning experience of the underwater environment. It's crucial that we continue to support those whose skills and ingenuity will drive the industry forward for decades to come." 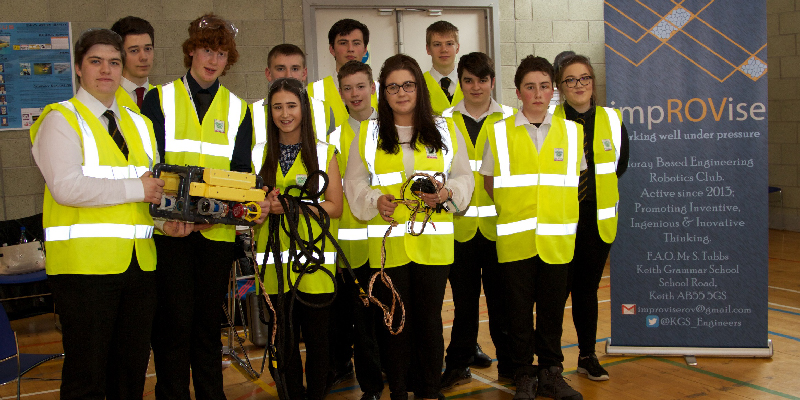 To date, Scottish MATE ROV has worked with more than 500 pupils from over 40 schools over the past 10 years.

Tim Smith, Vice President Communications and External Affairs for BP North Sea, said: “The ROV design competition continues to be a great highlight in the Aberdeen engineering calendar and BP is delighted to once again support RGU with this excellent initiative.

“The MATE ROV challenge offers pupils a fantastic opportunity to find out more about the oil and gas industry and supports BP’s strategy to develop capability and talent in the STEM subjects.”

Doug Middleton, Operations Director at ROVOP, said: “Initiatives such as ROV Mate are an excellent way to encourage interest in ROVs and subsea sector at an early age.  The recruitment and development of young talent is key for the industry and, as a high growth company, an integral part of ROVOP’s key focus.  As such, we are pleased to provide our local support to what is a fantastic competition.”