Lights, camera, action – Hollywood gives us a glimpse into the future

The 4th Industrial Revolution will change, and is changing the way we live our lives. Systems are now controlled and monitored by computer algorithms rather than by humans, and this is happening very quickly and across all industries.

In terms of predicting what sort of technologies will take hold in the years to come, Hollywood offers us something of a crystal ball view into what to expect in the digital tomorrow. While we haven’t quite reached the stage of light sabres or Star Trek style teleportation, looking back into the history of tinsel town, there are numerous examples of technology depicted within the realms of science fiction that have become, or are becoming, a reality. Here, we look at some of the most famous examples.

Autonomous driving
During the late-1980s and early 1990s Arnold Schwarzenegger was at the peak of his action-packed powers. And, in the 1990 smash hit Total Recall, whilst fleeing a band of villains, he jumps into ‘Johnny Cab’ - an automated taxi service that features a voice-activated robotic cab driver. However, it didn’t work out all that well as ‘Johnny’ didn’t quite understand the instructions given to him and ended up being ripped out of the driving seat altogether by a frustrated Arnie.

While level 5 autonomous driving is still quite some way off, technology is continuing to develop at a rapid rate with companies like Google and Tesla, and new models are already beginning to feature level 2 (partly automated) and level 3 (highly automated) technology. Autonomous vehicles are one of the major megatrends in the automotive industry with technologies around image sensing, radar, power management, LIDAR, GPS, 3D mapping, AI and IVN (In Vehicle Networking) driving the industry forward.

Autonomous driving was also featured in the 2002 film The Minority Report, starring Tom Cruise. However, the movie also featured a raft of other technology that has become a reality.

Gesture recognition
The premise of the movie is that crimes (and in particular murders) can now be predicted and therefore prevented before they happen. Key to this is a gesture controlled computer interface. To see how far we are from this becoming a reality one only has to look at the latest games consoles, smart TVs and companies such as Bristol-based Ultrahaptics, a provider of a technology that enables users to receive tactile feedback without needing to wear or touch anything. The technology uses ultrasound to project sensations through the air and directly onto the user. Users can ‘feel’ touch-less buttons, get feedback for mid-air gestures or interact with virtual objects.

Printed electronics
The future depicted in The Minority Report does away with paper entirely and replaces it with flexible electronic displays. The underlying principles of printed electronics are conductive plastics/polymers or inks that are printed onto substrates, such as foils. The result is extremely thin and flexible displays, sensors and luminescent films. These are already in use in the automotive industry, e.g., printed antennas, occupancy sensors integrated into seats and automatic anti-dazzle rear view mirrors. Another example are test strips in the pharmaceutical industry. 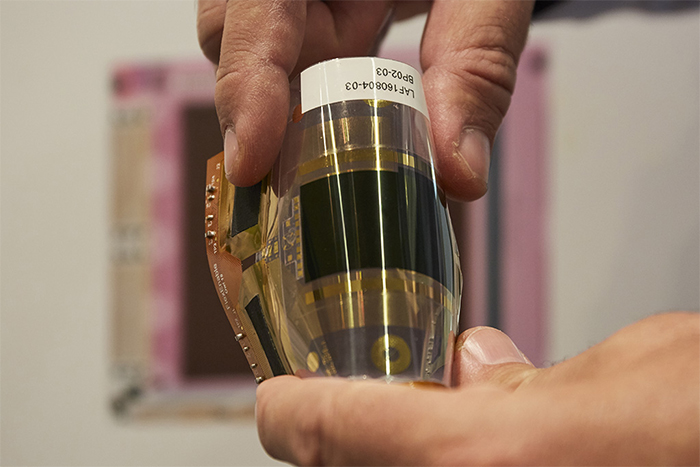 Above: Printed electronics have a raft of potential applications

Facial recognition
While on the run, Tom Cruise’s character finds it extremely difficult to avoid the authorities due to security cameras that scan the iris in the eye to identify an individual. While iris recognition has not quite hit the mainstream yet, facial recognition certainly has – you only have to go through passport control at Heathrow to know that.

Indeed, NEC has developed a new display with a miniature camera that can detect a person’s age and sex and then play an advert based on that person’s demographic. Spectrometry fingerprint technology is also starting to emerge where chemicals in the fingerprint can be analysed to determine parameters like gender, blood types and even if that person has consumed drugs or alcohol. 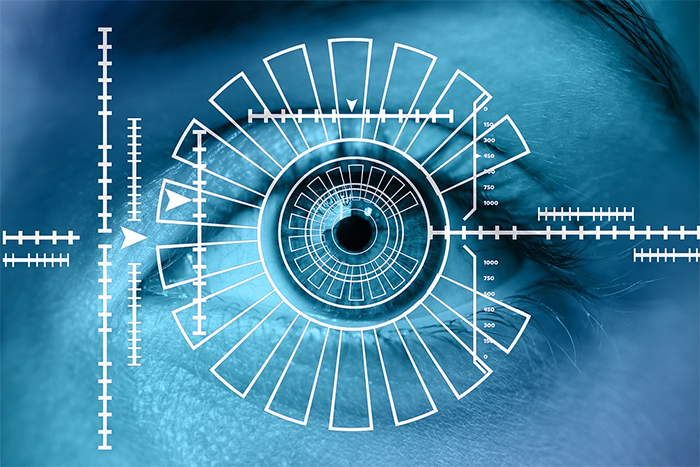 Above: Iris recognition was used in security cameras in The Minority Report

AI
Last year’s hit film Passengers, staring Jenifer Lawrence and Chris Pratt, is set on board a spacecraft en route to a distant world carrying hibernating human beings that will populate a new colony. Unfortunately the two protagonists wake up a mere three years into the 90 year flight and are forced to live out their lives on board the spacecraft. Their only other interaction is with a robotic barman played by Michael Sheen.

It’s not that hard to envisage a future where you could be in a bar and some sort of automated computerised system takes your order. Some airport restaurants have already replaced waiting staff with iPads. United Airlines’ Terminal C at Newark Airport underwent a renovation a few years ago which included 55 new dining options and 6,000 iPads (with the IT systems to support them).

Customers can view the menu, place and pay for their order, and browse the internet while they wait. The iPads can also scan the QR code on a customer’s boarding pass and provide them with updated flight information while they dine. Similar systems have been rolled-out at JFK and LaGuardia airports. 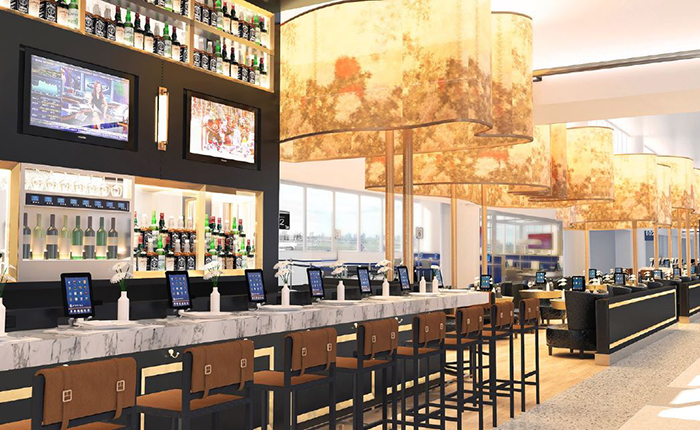 Above: iPads have replaced waiters in some airport restaurants

Virtual Reality (VR)
The Matrix trilogy was one of the biggest hit franchises of the 1990s and early 2000s. The film portrays a dystopian future where the majority of people live within a fake reality that is a virtual simulation – ‘the matrix’. While this rather scary scenario isn’t a reality, at least I hope not, what it depicts is essentially a world based upon Virtual Reality (VR).

Once plugged into the matrix, the film’s protagonists can have certain scenarios pre-programmed for them. For example, in the first Matrix film, Keanu Reeves and Laurence Fishburne practice their kung fu skills using a scenario programmed into the matrix. While we may not be able to literally throw ourselves around a virtual martial arts dojo quite yet, devices like the Occulus Rift allow us to have the feeling of being immersed into a new world. While the gaming community are the ones primarily reaping the benefits of this type of technology it has also been used for applications like flight training for military pilots and for people trying to conquer phobias like flying or heights. 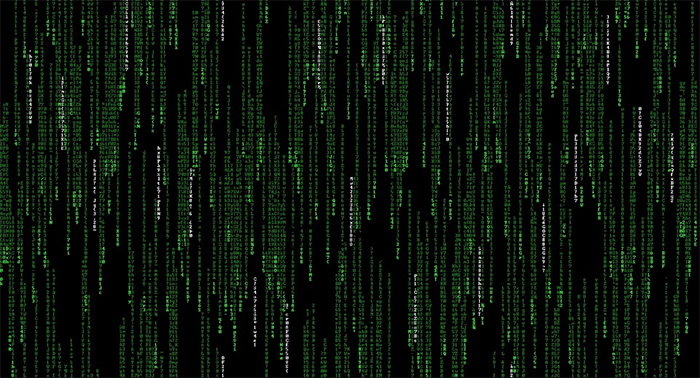 Above: The Matrix was essentially a computer generated virtual world

Drones
Citing examples of robots in the movies would be a very long list indeed and would warrant an entire article in itself – whether it’s the investigative spider type robots in The Minority Report to the full humanoid examples in Robocop and Terminator - Hollywood loves a robot.

One example however, that struck a chord recently is the news that Russian company Hoversurf are developing a hoverbike concept for the Dubai police force. Not content with driving around in Lambourghinis and Audi R8s, law enforcement in the emirate will soon be able to make a collar from the back of a hoverbike. Called Scorpion, the electric bike can reach a speed of 40mph and can currently travel for 25 minutes and carry up to 300kg.

Viewing a video of the hoverbike in action immediately evokes memories of watching Return Of The Jedi, and the iconic scene involving the speeder bikes zooming through the forests of Endor as Luke Skywalker and Princess Leia chase down a band of scout troopers.

As far back as the 1940s comic books told what were to be believed as fanciful stories of Dan Dare flying to the moon, only for that to become a reality a few decades later. That pattern continued as the fictional world of motion pictures gradually became a pre-cursor to reality. One can only imagine the future ahead of us if the film industry continues to be as prophetic in the years to come. Today’s imagination really is tomorrow’s reality.