The technological advances in the electronics and telecommunications sector have enabled the development of various advanced systems in the automotive industry. The seamless integration of embedded systems in vehicles has enhanced their functionalities to provide services related to navigation, diagnostics, Internet connectivity, and advanced driver assistance systems (ADAS). Thus, the modern vehicle has grown beyond just a means of transport.

An embedded system is a system of hardware and software designed to control and access data. The automobile, as we know it today, has evolved over the decades from being mostly a sum of heavy mechanical systems to the integration of mechanical systems and electronic controls. This has happened mainly due to the advent of semiconductor technology at various levels of application in the automobile, such as body electronics, safety and security, and powertrain and chassis control, among others, which has helped in improving performance levels and operating efficiencies of vehicles.

Increased awareness of global warming has led to the implementation of stringent emissions regulations across the globe, which has consequently fueled the demand for fuel-efficient vehicles. This increased demand has led to the development of new and advanced solutions by OEMs and automotive embedded systems providers. The increasing demand for electric and fuel-efficient vehicles and the growing trend of vehicle electrification are projected to lead to an increased use of embedded systems in the automotive industry to provide advanced features, in terms of safety, convenience and comfort systems, and connectivity.

Growing demand for electric vehicles
According to the US Environmental Protection Agency (EPA), approximately 26% of the total greenhouse gas emissions can be attributed to the automotive and transportation sector. The demand for electric vehicles is on the rise due to factors such as reduced prices of vehicles, government regulations on emissions, and increased fuel efficiency. Stringency in emission norms across the globe has resulted in technological advances in the automotive sector. The advent of EVs is one of the most important steps towards environmental protection. These vehicles do not use conventional fuel and, thus, do not produce any harmful gases.

All these factors have accelerated the sale of electric cars, especially in developed regions such as North America and Europe. Additionally, various initiatives such as tax exemptions, subsidies for electric vehicles, and R&D and infrastructure development activities have been undertaken by governments of various countries to promote the sale of electric vehicles. These vehicles require embedded systems for basic as well as advanced functions. As they rely completely on electrical power supply, there is increased use of electronic devices in these vehicles. Thus, the growth of the electric vehicles market will provide opportunities for growth of the automotive embedded systems market. 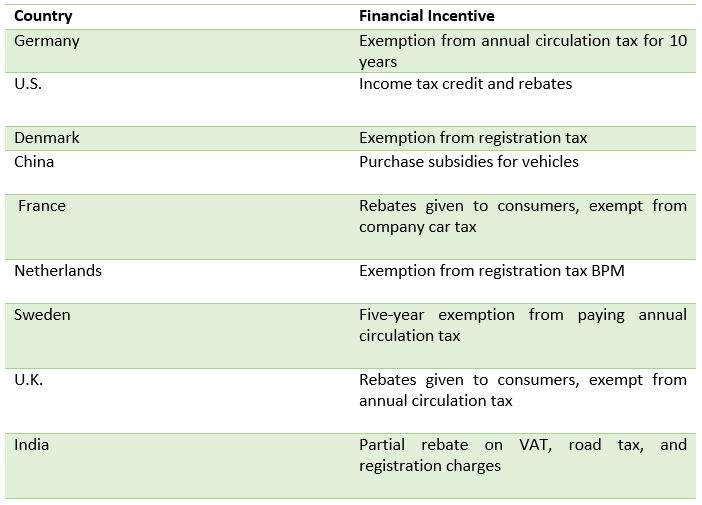 Increasing demand for advanced safety, comfort, and convenience systems
Increasingly stringent safety norms laid down by governments and legislative agencies have driven automobile manufacturers to build safer vehicles by providing features, such as antilock braking systems (ABS), electronic brake-force distribution (EBD), and airbags. These safety features rely heavily on inputs from sensors. The US Highway Safety Act of 1991 made airbags and ABS features mandatory in all passenger cars. In India, airbags, ABS, and speed-warning systems will become mandatory for passenger cars from October 2018. Additionally, with changing buyer preferences, there is a growing demand for safety associated with comfort and luxury. This trend is more evident in developed economies where purchasing power is higher. As a result, embedded systems are being used to provide better safety, comfort, and convenience.

Safety features such as ADAS, ESC systems, electronic steering systems, brake-by-wire systems, and airbags, among others, are gaining popularity across the globe. The installation rates of ADAS have been increasing over the past few years, leading to a robust, reliable, and resilient system. Until recently, ADAS was implemented only in premium vehicles due to high costs. However, technological advances and expansion of the ADAS ecology have led to OEMs introducing the system in the mainstream market. Robert Bosch expects sales of radar systems to increase by 60% and video sensors by 80% this year. These factors are estimated to drive the market for automotive embedded systems.

Rising trend of vehicle electrification
The role of electronics has been crucial in improving vehicle performance. There has been an increase in the use of electronic components in various vehicle applications, such as safety and convenience features, infotainment, electronic steering, and braking, among others. Electronics account for nearly 40% of the components in a conventional internal combustion engine (ICE) vehicle. These innovations in safety, advanced connectivity, and expanded availability of telematics are expected to pave the way for the growth of electronics in automobiles.

With increasing the number of features in automobiles, the need for energy has also increased, which has, consequently, influenced fuel economy. Several sensors, control units, and components are being used in vehicles to provide comfort and safety and to control emissions. The use of electronics has played a key role in meeting safety parameters and has made automotive systems user-friendly and convenient. Efficient electrical systems facilitate optimum distribution of power to various parts of a vehicle and increase the overall efficiency of the vehicle, resulting in decreased emissions and increased safety and accuracy. A majority of the electronic applications are used in chassis, safety and control, networking, infotainment, and powertrain. These electrical systems increase overall comfort and improve the driving experience.

Autonomous vehicles are self-driven vehicles that can sense the environment and navigate to the destination without any human physical input; they can be operated through voice commands. In recent years, there has been a focus on autonomous cars by the leading automakers such as Mercedes-Benz, Audi, Ford, Toyota, BMW, and Volkswagen. Mercedes-Benz has already started selling autopilot systems for freeways; however, it still requires a driver’s hand on the steering wheel.

Tesla has also launched the Tesla Model S Autopilot System, a semi-autonomous vehicle software that is capable of self-driving on highways. The process of autonomous driving requires two-way communication and feedback between the driver and the vehicle, for which an advanced embedded system is required to perform such comprehensive tasks. The manufacturers of automotive embedded systems and semiconductors have the opportunity to grow in this segment.