Production of electronic equipment is healthy based on July and August data. China, the largest electronics producer, showed three-month-average change versus a year ago (3/12) of 13.8% in August. Growth for China has been in the 12% to 15% range since January 2017, picking up from the eight to 11% range in 2016.

South Korea's electronics production has been more volatile, but was over 12% in June and July. The United States has shown accelerating growth since turning negative in 2016. U.S. electronics 3/12 change has been above six percent for the last four months (May through August), the highest since February 2004. European Union (EU) total industrial production growth has been in the two to three percent range from April to August, slowing from five percent earlier in the year. Our Semiconductor Intelligence global index of electronics production has been relatively robust in the last two years, in the seven to nine percent range since January 2017. 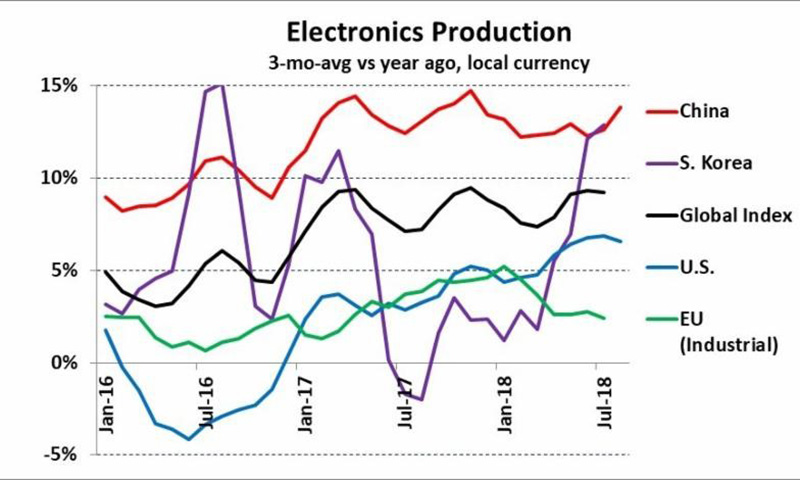 Electronics production change in key Asian countries has been mixed. India and Vietnam have led the way, with India's electronics growth accelerating from 15% in 2017 to 27% year-to-date through July 2018. Vietnam has decelerated from 33% growth in 2017 to a still robust 18% year-to-date. India and Vietnam should continue to outperform other Asian countries because of their low labour rates and improving infrastructures. China and Thailand have maintained growth in the 12% to 14% range over the last year and a half. Malaysia and South Korea have picked up from four percent in 2017 to ten and eight percent respectively year to date. Japan electronics growth is stuck in the low single-digits while Taiwan has seen declines. 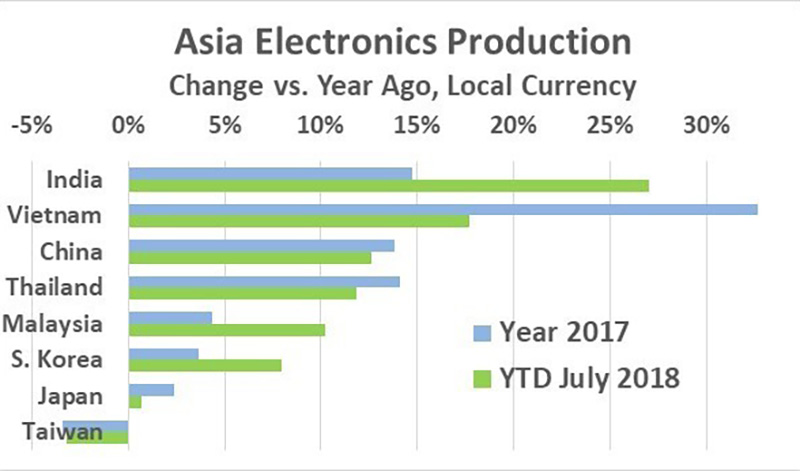 Total electronics exports in 2017 were $1.8tn while imports were $2.1tn, according to the World Trade Organisation (WTO). China continued as the largest electronics exporting country in 2017 at $592bn. However, the total other Asian countries became larger than China at $627bn. China was also the largest importing country with $408bn in 2017. The US was second at $336bn. 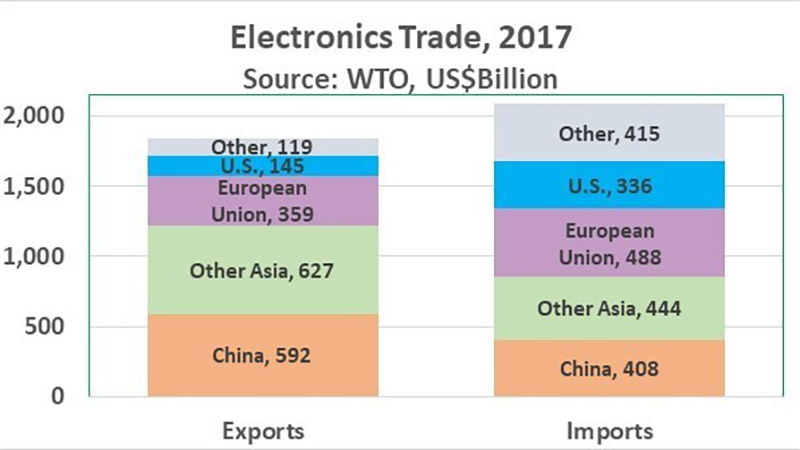 The US and China are currently in a trade war, with each country imposing tariffs on imports. The impact of the trade war on US electronics and semiconductor companies was explained in a New York Times article. The effect on Asian companies was covered in an article in the Nikkei Asian Review. In addition, the US is renegotiating the North American Free Trade Agreement (NAFTA). A preliminary agreement was reached with Mexico and discussions are ongoing with Canada.

Without getting into the politics of these trade issues, it is important to note the significance of China and Mexico to US electronics imports. According to the US Census Bureau, the majority of US electronics imports in 2017 came from China at 59%. Mexico was the second largest source of imports at 18%. Most of the rest was from other Asian countries at 19%. 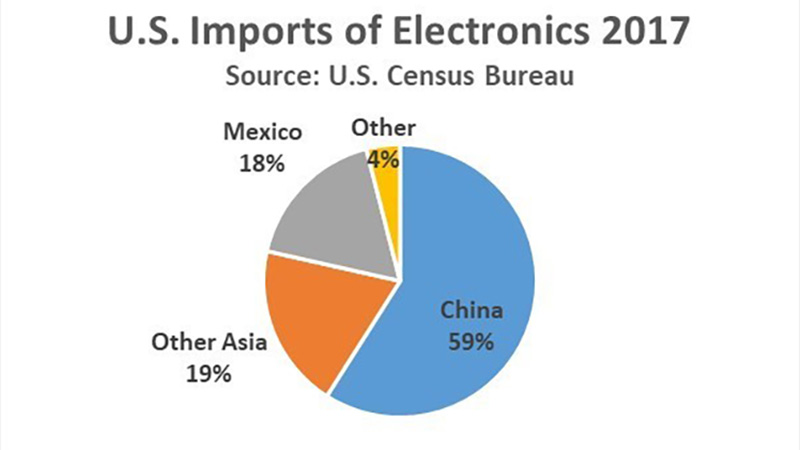 Electronics and semiconductors are truly global industries. Free trade is necessary to keep these industries running efficiently. Hopefully the current trade issues can be resolved in a reasonable time.