As the rate of smartphone use in vehicles continues to grow rapidly in nearly every major market globally, vehicle manufacturers and suppliers are rushing to integrate and incorporate design and connectivity elements into new vehicles to address the market demand and desire among consumers. More than 85% of new car intenders in Germany and the United Kingdom have a smartphone, according to recent research from IHS Automotive.

A recent report, Apps in the Car 2015, includes regional preferences from a recent consumer study conducted by IHS Automotive. More than 4,000 vehicle owners who intend on purchasing a new vehicle within the next 36 months were surveyed, representing four key automotive markets, the US, China, Germany and the United Kingdom.

“Across the UK and Germany, we saw very similar results, though not exact,” said Colin Bird, Senior Analyst, Automotive Software, Apps and Services, IHS Automotive. “Consumers in these countries rely on their phones for in-vehicle connectivity and use a variety of apps while driving. Our research identifies many trends that can help foster further development for technology in vehicles sold in these countries.”

Among new vehicle intenders in Germany, Samsung smartphones led the way with 49% of respondents, indicating Samsung as the brand they owned and used most often. Apple ranked second at just 21%. In the UK, ownership of Samsung and Apple devices were nearly equal with Samsung, edging out Apple by just a percentage point margin (34% Samsung to 33% for Apple). Respondents from the UK also showed the largest variety of smartphone brand ownership in the survey, demonstrating an opportunity for vehicle app integration ecosystems that cater to a wider variety of devices, according to IHS research.

Operating systems also varied, with 67% of German consumers reporting Android use compared to just 21% for iOS systems. In the UK, findings were not as dramatic, though Android led the way with just over 50% of respondents compared with just 30% iOS users.

Consumers in the UK and Germany also indicated preferences for interacting with smartphones in the vehicle through an in-vehicle touchscreen and steering wheel controls, each of which were cited by more than 60% of respondents. 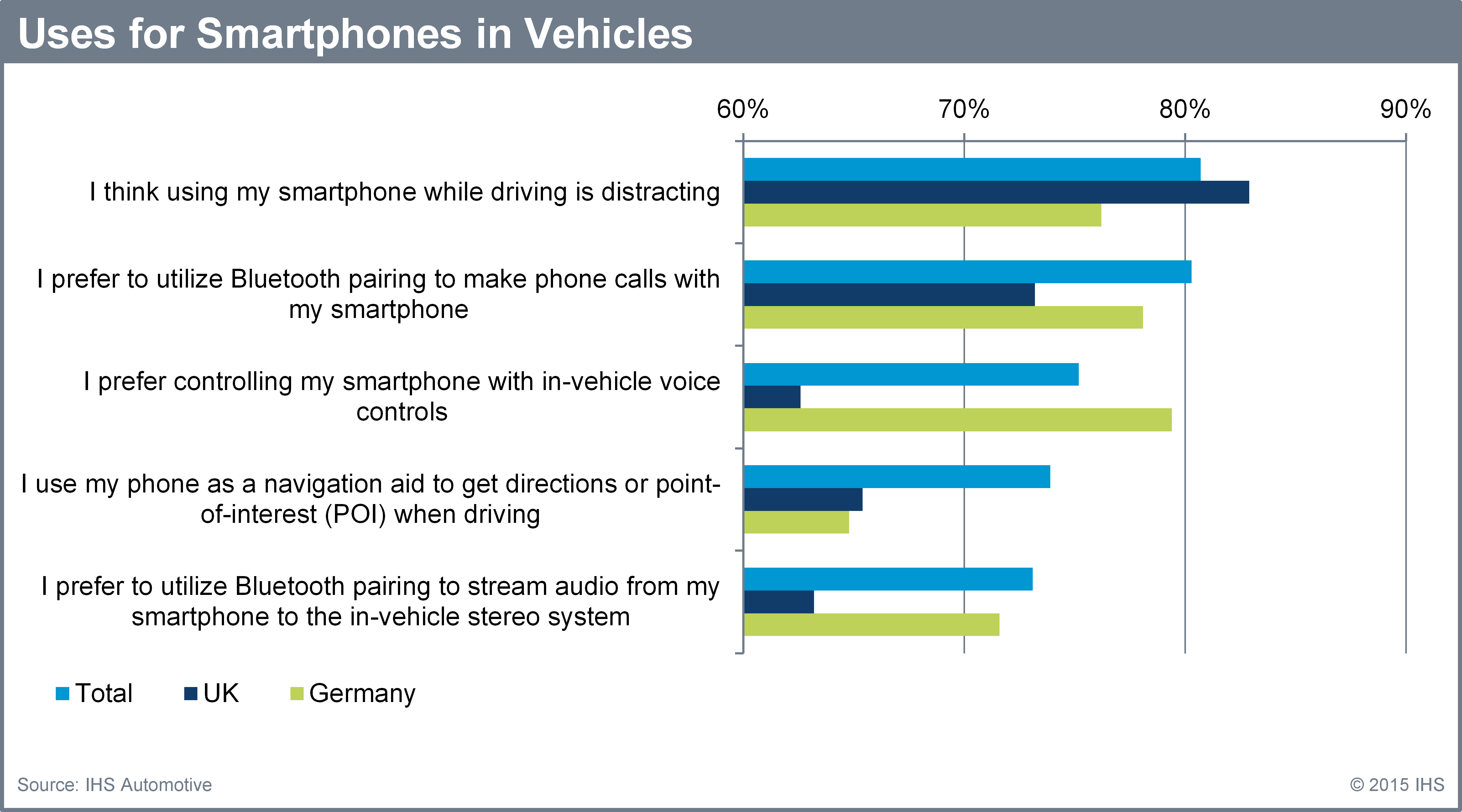 83% of respondents in the UK indicated their mobile phone package included a data plan, while just 60% of respondents in Germany reported having one. This could be a sign that German respondents rely more heavily on WiFi networks when they travel with their phones, suggesting that embedded connectivity might be of more value in Germany. Alternatively, UK-based respondents may be apt to use tethered infotainment apps and CE telematics more often.

More than 70% of respondents subscribe to a monthly mobile plan, with less than 30% indicating they have pre-paid or pay-as-you-go plans. When asked about carrier use, top mobile carriers were very competitive among UK-based respondents, with O2 having 25% share, Vodafone at 18% and EE used by 17% among respondents.

In Germany, however, T-Mobile led among carriers, with 25% share of the market for respondents. O2 and Vodafone followed closely behind, with 22 and 21% of respondents, respectively.

Somewhat surprisingly, AM/FM radio and CD and DVD players were cited by more than 65% of respondents as their listening method of choice in the UK, while respondents based in Germany indicated similar preferences. Across all respondents, more than 50% indicated listening to music that was stored on their mobile device was among the top choices for in-vehicle listening. internet/streaming radio and HD radio followed in the rankings.

Nearly 40% of respondents in the UK report said they subscribe to a premium streaming radio or on-demand streaming service, while less than 30% of German responders do.