Regional market shares of IDMs (companies operating wafer fabs), fabless companies, and total global IC sales were led by US headquartered companies in 2020, according to the March Update to The McClean Report 2021. 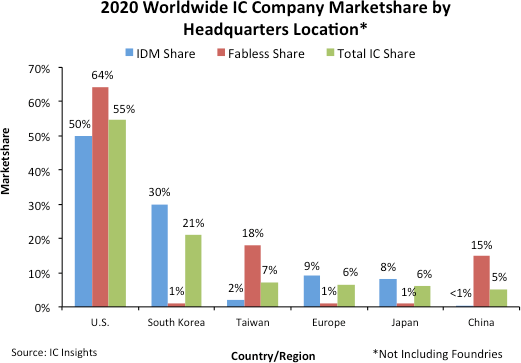 As shown in Figure 2, Japanese companies held almost half of the worldwide IC marketshare in 1990 only to see that share fall precipitously over the past 30 years to only six percent in 2020.  While the European companies marketshare decline has not been as steep as the Japanese companies, the European firms also held only a six percent share of the global IC market last year, down from nine percent in 1990. 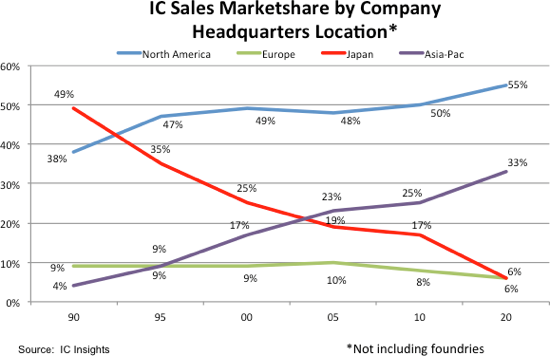 In contrast to the Japanese and European companies IC marketshare slide over the past three decades, the U.S. and Asian IC suppliers have seen their shares climb since 1990.  As shown in Figure 2, the Asian companies have seen their share of the worldwide IC market surge from a minuscule four percent in 1990 to 33% in 2020.  This increase in share by the Asian IC suppliers equates to a 30-year IC sales CAGR of 15.5%, slightly more than double the total IC market CAGR of 7.7% over this same timeperiod.