In the wake of tariffs and trade tension between China and the United States, government officials and company representatives throughout China have doubled down on their resolve to quickly and meaningfully grow the nation’s domestic IC business in order to reduce its dependence on critical IC components currently supplied by companies based in the U.S. and other countries.

In the memory IC market specifically, some recent headlines and reports have proclaimed that China is ‘unstoppable’ and will soon match the output and technology level of Samsung, SK Hynix, and Micron. When those types of claims emerge, a reality check is in order.

Consider that China’s first indigenous DRAM supplier, Changxin Memory Technologies (CXMT), is due to sample its first DRAM products by the end of this year. This company has a few thousand employees and a capital spending budget of about $1.5bn per year. In contrast, Micron and SK Hynix each have over 30,000 employees and Samsung’s memory division is estimated to have over 40,000. Moreover, in 2018, the combined capital spending from Samsung, SK Hynix, and Micron was $46.2bn. Now that’s a reality check.

Overall, DRAM and flash memory accounted for 41% of China’s $155.1bn IC market last year. Although some reports would have us believe that China’s wafer fab output is quickly increasing and that technology advances (particularly in memory) will catch up with those from the leading suppliers (within three to five years in some cases), IC Insights completely disagrees.

While China continues to make large investments in its memory manufacturing infrastructure and has developed some clever design innovations in an attempt to avoid potential patent disputes, IC Insights remains extremely skeptical whether the country can develop a competitive indigenous memory industry even over the next ten years and come anywhere close to meeting its memory IC needs.

One major issue, among many, that most observers overlook with regard to China becoming more self-reliant for its IC needs is its lack of indigenous non-memory IC technology. Currently, there are no major Chinese analog, mixed-signal, server MPU, MCU, or specialty logic IC manufacturers.

Moreover, these IC product segments, which represented over half of China’s IC market last year, are dominated by well-entrenched foreign IC producers with decades of experience and thousands of employees.

In IC Insights’ opinion, it will take decades for Chinese companies to become competitive in the non-memory IC product segments. While everyone is focused on China’s moves in the memory market, becoming self-reliant in non-memory IC segments poses an even more difficult problem for China. 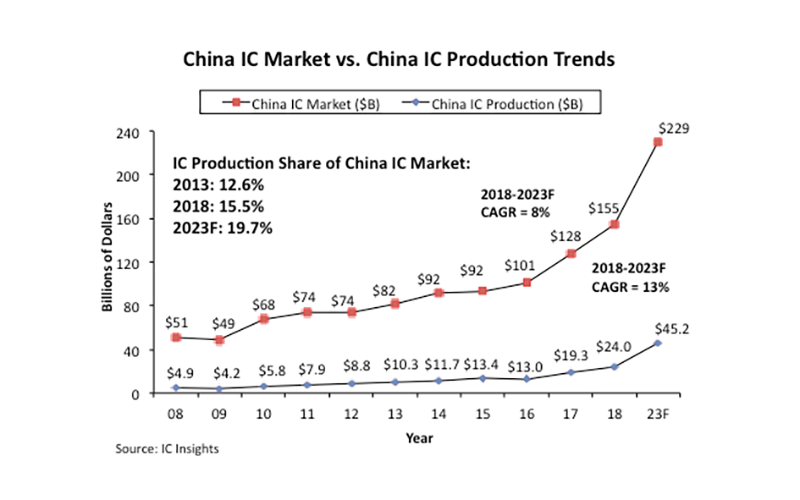 TSMC, SK Hynix, Samsung, Intel, and other foreign companies that have IC wafer fabs located in China produced the rest. IC Insights estimates that of the $6.5bn in ICs manufactured by China-based companies, about $1.0bn was from IDMs and $5.5bn was from foundries like SMIC.

If China-based IC manufacturing rises to $45.2bn in 2023 as IC Insights forecasts, China-based IC production would still represent only 8.4% of the total forecasted 2023 worldwide IC market of $538.8bn.

Even after adding a significant markup to some of the Chinese producers’ IC sales (many Chinese IC producers are foundries that sell their ICs to companies that re-sell these products to the electronic system producers), China-based IC production would still likely represent only about ten percent of the global IC market in 2023.

Currently, China is putting on a brave face with regard to its future IC industry capabilities. However, given the extremely small and undeveloped starting base of Chinese company IC production and technology today, IC Insights believes it is essentially impossible for China to make significant strides in becoming self-sufficient for its IC needs (memory and non-memory) within the next five years and probably not even within the next ten years.