While Wi-Fi 6E has not been out for long in the grand scheme of things, the next generation – often referred to as IEEE 802.11be or simply ‘Wi-Fi 7’ is soon to arrive.

Wi-Fi 7 will be a further step forward in terms of speed and throughput and will enable applications including 8K video streaming, full immersion AR/VR, gaming, and cloud computing.

Home users will enjoy the fluid user experience that Wi-Fi 7 delivers for UHD video, immersive AR/VR, online gaming, and large file sharing applications with seamless whole home coverage and mobility. From their office, users will get multi-gigabit Wi-Fi access per device for working, enjoying the mobility and freedom. For industrial applications, factories and their workers will benefit from the deterministic real-time human-to-machine interactions and higher productivity from machine-to-machine connectivity – all without Ethernet cable tethering.

In this article, Scott Tanfrom onsemi will review the high priority features supported in 802.11be Release 1 and consider the benefits of Wi-Fi 7, especially how it will enable and enhance future connectivity. 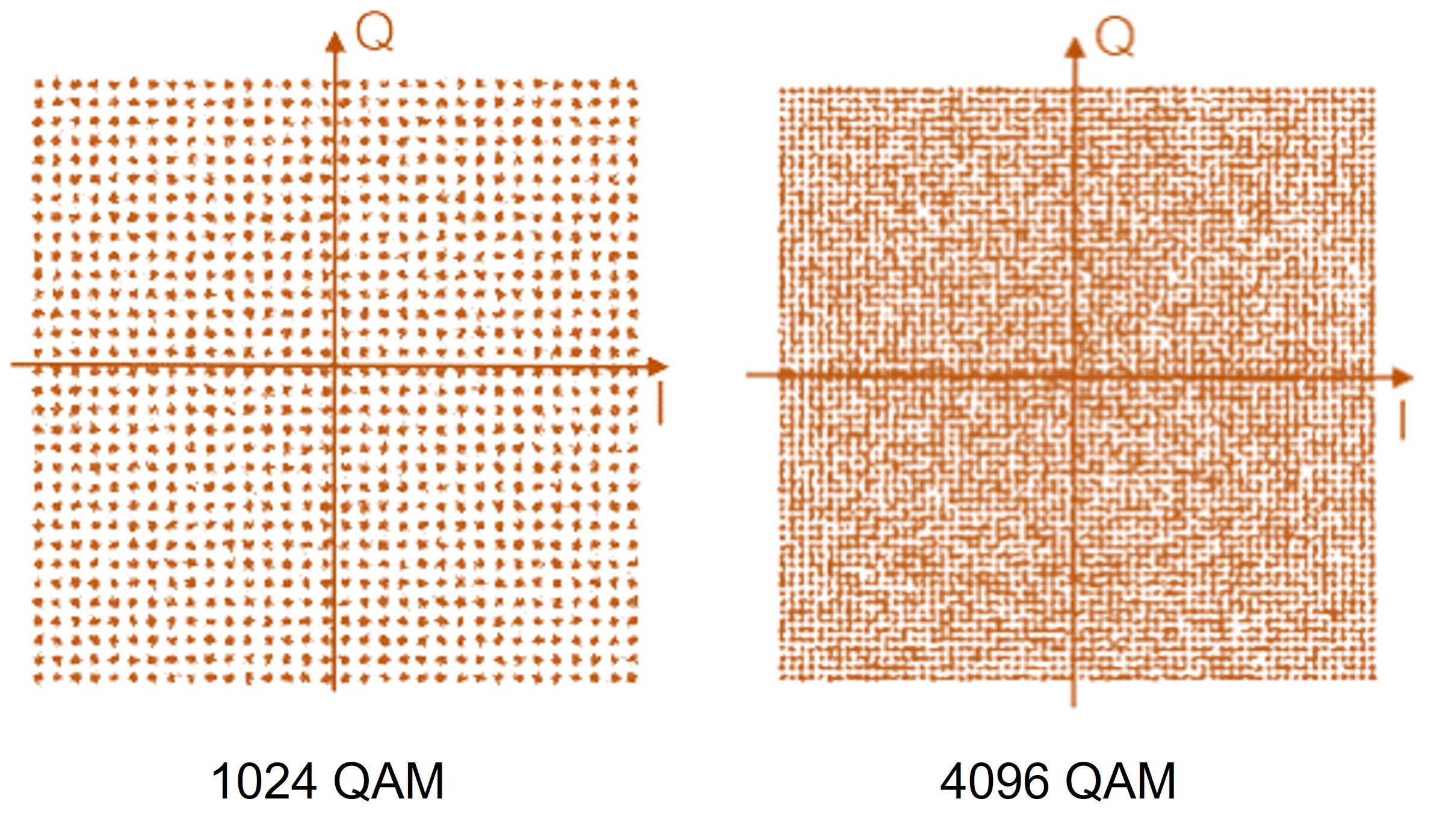 Multi-Link Operation: Multi-link Operation (MLO) allows network devices to communicate across multiple bands and channels at the same time – a very useful feature. Similar to the link aggregation/trunking features of wired Ethernet, it offers greater sophistication and flexibility by creating bundling or bonding of several radio links to work as a high bandwidth (virtual) link between network devices. The individual radio links are able to work both independently and simultaneously as well as coordinating to enhance aggregate speeds, latency, range (coverage), or power saving. MLO within Wi-Fi 7 is a MAC layer solution for concurrently using multiple links and is transparent to the higher-layer protocols and services. It is highly useful in improving throughput, link robustness, roaming, interference mitigation, and reducing latency. 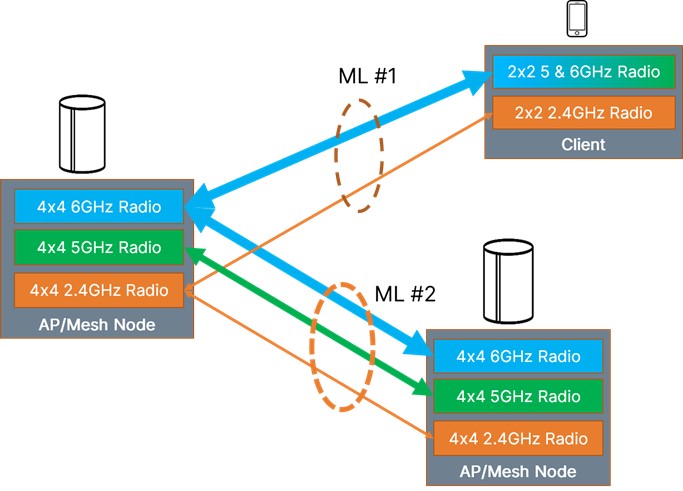 If we consider a mesh network comprising triband (6GHz, 5GHz, 2.4GHz) mesh nodes or access points (APs), MLO creates a high-speed, low-latency wireless backbone for the home network while also delivering fronthaul for the devices connected to the mesh nodes/APs. Supposing each mesh node is capable of supporting a 4x4 triband concurrent configuration, then the aggregate backhaul (backbone) will be able to support rates up to 21.6Gbps. Backhaul is more reliable and robust when MLO is incorporated.

As an example, with Wi-Fi 7 MLO-based backhaul, if a link is interrupted then traffic is immediately switched to the other links without service interruption or degradation of quality of service (QoS). Currently, Wi-Fi 6 and 6E mesh solutions use a single 4x4 radio for wireless backhaul, restricting speeds to 4.8Gbps. However, unlike Wi-Fi 7, interference or interruption will impact or break the whole backhaul (backbone) resulting in QoS degradation and service interruption.

If a network client device (smartphone, laptop, etc.), is able to use multiple radios then MLO increases bandwidth leading to higher speeds, lower latency, and higher reliability. Ultimately, this benefits the user experience even when conducting seamless roaming.

Multi-Resource Units (MRU): In Wi-Fi 6, an AP only assigns a single resource unit (RU) to each station. However, due to new RU allocation mechanisms Wi-Fi 7 will permit a single station to have MRU set to it. This offers a number of benefits including enhanced spectrum utilisation efficiency, additional flexibility for bandwidth (QoS) control on a ‘needs’ basis as well as reducing interference and improving coexistence with other devices that occupy the same band or channel.

In Wi-Fi 7, these MRU mechanisms enable the use of orthogonal frequency division multiple access (OFDMA) and/or non-OFDMA modes for greater versatility. OFDMA mode gives small and large MRUs greater flexibility to allocate the RU/MRUs without complicating the MAC and scheduler designs while the non-OFDMA mode provides more options in the preamble puncturing of subchannels.

To illustrate the point, 20MHz subchannels (except the primary subchannel) or 40/80MHz channels can be punctured (skipped) in 320MHz channel. This allows the transmission to maximise spectrum utilisation of the channel during interference and provides excellent coexistence in cases where there is an existing device occupying a specific spectrum section of the channel.

Benefits of Wi-Fi 7 to end users?

Huge Throughput: Extending beyond Wi-Fi 6 (a.k.a. 802.11ax), Wi-Fi 7 supports extremely high throughput (EHT). The standard specs define this as 46Gbps raw data rate with 16 SSs which is significantly faster than the 10Gbps Ethernet running on Cat 6/6a/7 cables. In terms of performance, the nearest technologies are Thunderbolt 3/4, USB 4, and HDMI 2.1, all of which achieve at least 40 Gbps.

With such rapid performance, 5.8Gbps is achievable with popular devices including smartphones and laptops that have two Wi-Fi antennas (two SSs). Even with strict power or size constraints, multiple devices with a single antenna can also support a data rate up to 2.9Gbps. Effectively, users achieve more than twice the speed without the cost of additional antennas, power amplifiers or front-end modules – a huge step forward for many forthcoming applications.

Ultra-Low Latency: QoS, and therefore the user experience, is highly dependent upon latency – especially in real-time applications. Sub-20 ms latency is a requirement for multimedia applications including high-resolution real-time video streaming, virtual reality, augmented reality, cloud gaming, and real-time programming – although this is difficult to achieve within a wireless environment.

On the WAN side, the typical latency of around 10 ms (a little more for fiber optics) is a concern when connecting to the cloud. In fact, achieving the required latency between the WAN modem and the endpoint client device is very challenging. Wi-Fi 6 is capable of 10-20 ms latency, while Wi-Fi 6E delivers lower latency due to a better environment. Wi-Fi 7 will drive latency to below 10 ms initially and eventually under 1 ms due to deterministic boundaries. This will be achieved by multiple tools in the 802.11be standards including MLO, TWT, and rTWT, improved triggered transmissions, and ultimately integrated time-sensitive network (TSN) features.

Robust connectivity: MLO provides a dynamic mechanism to distribute the connection across several links, thereby dynamically balancing the transmission load on the connection based on metrics such as link quality for performance and robustness – known as load balancing. If the connection is subjected to interference or link loss (perhaps due to range) on a single link, the remaining links will ensure continuity of connection as the transmission seamlessly switches to the good links – a fast failover. This connection robustness is helped by MRU/RU and preamble puncturing such as when interference happens on specific subchannels or a particular section of the spectrum of the operating channel, the AP can avoid using those interfered subchannels or RU/MRUs and optimize the transmission based on the current environmental situation and channel status. In addition, modulation, and coding schemes (MCS) 14 and MCS 15, both of which boost signal to noise ratio (SNR), enhance the robustness of the connection when the link distance is elongated.

Enhanced Coexistence and Interference Mitigation: Wi-Fi 6 and Wi-Fi 6E added several features that enhanced interference mitigation and coexistence above and beyond the capabilities of Wi-Fi 5. Particularly, Wi-Fi 6 offers flexible subchannel puncturing patterns and is able to make use of RU in OFDMA mode to avoid interference at a granular level – as low as 2 MHz (smallest RU with 26-tones). As well as the Wi-Fi 6 advantages, Wi-Fi 6E supports automatic frequency coordination (AFC) for coexistence with incumbent equipment.

However, Wi-Fi 7, with MRU and superior flexibility of preamble puncturing features that support all possible subchannel and high-resolution puncturing patterns in both OFDMA and non-OFDMA (MU-MIMO) modes, provides significantly enhanced interference mitigation, with excellent QoS across multiple service types.

Improved User Experience when Roaming: MLO delivers seamless roaming based upon roaming enhancement features defined in the 802.11be standards, improving the user experience. Specifically, when the network device is further from the AP, MLO retains the ML (multi-link) connection and may automatically communicate on the 2.4GHz band without switching bands. On the other hand, if the device is closer to the AP, MLO can rapidly and automatically switch to the 5GHz and 6GHz bands for greater throughput. This is much simpler than Wi-Fi 6 and 6E APs that use band steering or client steering at the application layer to force the client to another band. It does not always work as the AP has no control of the client devices – especially band switching – as well as incompatibility between vendor equipment, which is a perennial challenge.

Better Energy Efficiency: The wider 320MHz channel bandwidth, 4K-QAM, and lower latency allows Wi-Fi 7 to operate with enhanced power efficiency. While the features are built on those found in Wi-Fi 6, Wi-Fi 7 improves these features in a multitude of ways for optimal power savings.

As well as TWT, which many consider to be the best power-saving feature in Wi-Fi 6, Wi-Fi 7 also incorporates triggered transmission opportunity (TXOP) sharing to further enhance operational power saving. This permits APs to dedicate some time within an obtained TXOP to an associated client device for transmission, eliminating the need to wake during the next service period (SP).

However, Wi-Fi channels can be very susceptible to interference, as well as being highly dynamic and frequency selective. This can cause polluted channel state information (CSI) which will almost certainly significantly reduce motion detection accuracy. However, Wi-Fi 7’s 320MHz channel enables far richer CSI data for up to 3984 tones, thereby ensuring motion detection accuracy. The 320MHz transmissions allow a lot of CSI data to be captured, permitting a good amount of non-interfered CSI to be selected and used for motion detection, thereby avoiding corrupting the position with noisy CSI data.

With 2x or 4x oversampling and upsampling techniques, RTT timestamp and measurement accuracy can be in the sub-nanosecond resolution for 320MHz signals. In other words, Wi-Fi 7 can achieve around 30 cm accuracy for ranging and indoor positioning. This capability will doubtlessly enable a whole range of exciting and new Wi-Fi sensing applications.

Wi-Fi 7 represents a very significant step forward in user experience, especially in demanding applications, such as cloud gaming, immersive AR/VR, 8K video streaming, Industry 4.0 which it will surely enable and enhance. Users will benefit from higher speed, lower latency, and enhanced robustness – over and above what the (already good) Wi-Fi 6/6E can provide.