Making the right choice: Wireless tech for the IoT

There are many use cases for IoT devices, requiring a range of connectivity capabilities. For example, WiFi is often used in internet protocol (IP) cameras and devices with streaming content.

Bluetooth is ideal for commissioning a variety of smart home devices and other applications. Zigbee, Thread, Z-Wave and Bluetooth mesh support large networks of interoperable devices, such as smart lighting, energy monitoring and home security systems.

Each wireless protocol offers its own blend of features and characteristics, and picking the right one depends on the end product’s requirements. Think about how it will be used and how it fits in a wider ecosystem. This will guide your decision and help you address considerations around energy efficiency, performance, security, interoperability, upgradability and interference with other RF sources. Let’s look at each of these popular connectivity options in turn.

Bluetooth is a popular and ubiquitous protocol that has evolved over time. Its first official specification was released in 1999 by the Bluetooth SIG. What started as a protocol for mobile headsets and streaming voice/audio data has evolved into a powerful and yet energy-efficient wireless technology, with Bluetooth Low Energy (LE) now being most popular for power-sensitive IoT end-node applications.

The Bluetooth LE specification supports very low-power operation. To work reliably in the 2.4GHz frequency band, it leverages a robust frequency-hopping spread spectrum approach that transmits data over 40 channels. With the enhancements in Bluetooth v5.0, Bluetooth LE offers a tremendous amount of flexibility for IoT designs, including multiple physical layer (PHY) options that support data rates from 125kbps to 2Mbps, multiple power levels (from 1mW to 100mW), and multiple security options, up to government grade.

First standardised in 2004 by the Zigbee Alliance, Zigbee operates on the IEEE 802.15.4 physical radio specification and features lower power consumption relative to Bluetooth and WiFi. Due to its mesh topology and proven scalability to easily support networks with over 250 nodes, it’s widely used in home automation and industrial mesh networks. 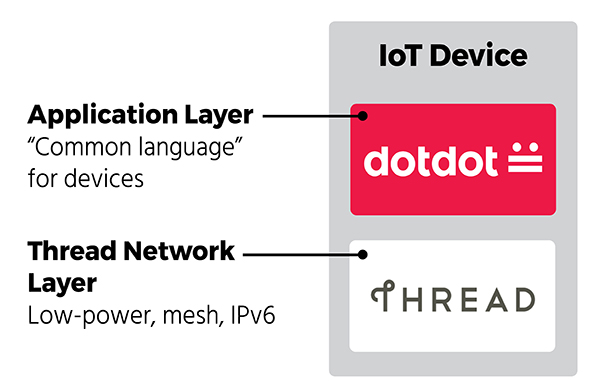 Above: Figure 2. Dotdot provides a common application layer for the IoT

The Zigbee Alliance has also specified application profiles, known as cluster libraries, to simplify the development of standard products such as light bulbs and occupancy sensors. The common Zigbee application layer for the IoT is known as Dotdot, a universal, standard application language for smart devices to communicate over any network, such as Thread.

Thread is the most recent wireless technology to emerge for the IoT, providing IP-based mesh networking and advanced security. The Thread Group, founded in 2014, released the Thread specification in July 2015 and has continued to enhance it. Thread is based on a foundation of existing standards, including IEEE 802.15.4, and adds special design specifications for the network and transport layers. Like Zigbee, Thread operates in the 2.4GHz frequency band and forms a robust, self-healing mesh network of up to 250 nodes.

Accomplishing this is largely a software effort, which is why Thread solutions and stack providers take pride in developing and offering robust solutions to implement on the host silicon, typically a wireless microcontroller (MCU) or system-on-chip (SoC) device. As flash memory has become cheaper and integrated circuits (ICs) have incorporated more memory, the low/medium memory requirements of Thread stacks have enabled chip integration of more RF components, such as inductive matching networks. This frees developers from the complexities of RF engineering.

Z-Wave technology is an open, internationally recognised International Telecommunication Union (ITU) standard (G.9959). It’s one of the leading wireless smart home technologies available today, with more than 2,400 certified interoperable products worldwide. Represented by the Z-Wave Alliance and supported by more than 700 companies around the world, Z-Wave is a key enabler of smart living solutions for home safety and security, energy, hospitality, office and light commercial applications. Z-Wave technology was developed in 1999 by Zensys, a Copenhagen-based start-up, later acquired by Sigma Designs in December 2008, and most recently acquired by Silicon Labs in April 2018.

One key attraction of Z-Wave is that it provides mesh networking on sub-GHz frequency bands, avoiding the sometimes crowded 2.4GHz industrial, scientific and medical (ISM) band, which most of the other standards-based IoT protocols use.

Interoperability and backward-compatibility are key tenets of Z-Wave’s technology philosophy. This outlook has garnered many fans in the device-manufacturing and ecosystem space, and serves as the backbone of the Z-Wave Alliance’s success. The alliance focuses on certifying Z-Wave product interoperability and on expanding marketing opportunities for members.
WiFi 802.11b/g/n WiFi is built on the IEEE 802.11 specification for local area networks. It primarily addresses the need for higher-bandwidth IP networks in homes and businesses. Like many wireless IoT technologies, WiFi operates in the 2.4GHz frequency band. It also recently extended support to the 5GHz band to address the challenges of achieving higher data rates and avoiding interference from other licensed 2.4GHz technologies.

Above: Figure 3. Z-Wave is used by more than 700 companies in more than 2,700 certified interoperable products worldwide

However, you get what you pay for, which is why WiFi is the dominant player when you need data rates beyond 10Mbps and direct access to the internet.

Looking ahead, we can expect WiFi to continue to evolve with the IoT, which will likely mean lower power consumption, faster speeds and combined hardware/software solutions for coexistence in the 2.4GHz band (with Bluetooth and 802.15.4) and the 5GHz band (with cellular).

For low-data rate applications such as industrial sensing, sub-GHz networks operating at frequencies below 1GHz offer some benefits over more powerful, feature-rich 2.4GHz protocols. Range is the primary area where sub-GHz networks shine. Narrowband transmissions can operate uninterrupted for a kilometre or more, transmitting data to distant hubs without the need for more complex mesh software implementations to hop from node to node. The sub-GHz band is also less crowded than ISM 2.4GHz.

That said, in some regions there are limited sub-GHz channels available, which prevents developers from producing a single-architecture global solution. A related drawback is that sub-GHz airwave regulations differ by country, and duty cycle restrictions may actually limit the application’s transmission time.

Overall, sub-GHz networks win when it comes to range, but lack the standardisation of the 2.4GHz protocols we previously mentioned.

As a result of combined hardware and software engineering efforts throughout the industry, we’ve seen a rapid rise of wireless MCUs and SoCs capable of supporting multiple wireless protocols. These multi-protocol devices open up new IoT capabilities, such as simplified device commissioning and Bluetooth beaconing while on other networks.

Multi-protocol SoCs also enable over-the-air (OTA) updates to deployed devices, drawing on the convenience of smartphones or tablets, and provide a simple means to add newer protocols such as Bluetooth LE to products with legacy proprietary protocols.

Advanced multi-protocol, multi-band SoCs from a number of suppliers are now providing greater flexibility and design options for developers seeking to add wireless connectivity, while simplifying their end-node designs.