Since the UK’s first power station was connected to the grid in 1957, the UK have been pioneers in nuclear technology. However, in those post-World War II days, the nuclear industry wasn’t designed with decommissioning in mind.

Fast forward to 2019, and the UK is suffering from what you might call a nuclear hangover. We were one of the first countries to establish widespread nuclear energy, and as such, we are now one of the first that has to deal with the huge challenge of decommissioning, and our significant amount of legacy nuclear waste.

Rustam Stolkin, Professor of Robotics, University of Birmingham and Director, National Centre for Nuclear Robotics (NCNR), explains the centre’s role and how modern robotics technology can help in cleaning up the UK’s legacy nuclear waste.

The UK’s nuclear clean-up operation is the biggest environmental remediation challenge in Western Europe. And when you start to crunch the numbers, the situation does look concerning. The UK contains 4.9 million tonnes of legacy nuclear waste, and dealing with that using current technology is expected to take 120 years at a cost of £234bn to the UK taxpayer.

Because of figures like these and the fact that dealing with nuclear waste is an extremely hazardous environment for humans to work in, it is therefore a sector that is crying out for increased levels of robotisation and automation.

However, the nuclear industry is highly unstructured, random in nature and cluttered, with nuclear waste capable of taking on many different forms, shapes and sizes - some waste can be handled by humans wearing air-fed plastic suits, while some high radiation waste can only be handled by remote machinery.

Stolkin commented: “I started off as a robotics professor looking for useful applications for robotics and I thought that nuclear waste merely constituted a few used up fuel rods. However, there are pipes, vessels, construction materials, wellies, rubber suits, masks, respirators, tools, hoses (one of my colleagues in the nuclear industry estimates that the Sellerfield site goes through 10,000 pairs of rubber gloves every day) – those gloves then become contaminated nuclear waste.”

It is therefore a highly under-robotised industry as current robotics techniques that are used in manufacturing for example, which are pre-programmed and repetitive, are just not fit for purpose. The nuclear industry is also, as you might expect, very conservative and safety conscious, so can be reluctant to change.

“The nuclear industry is a very high tech industry so you might think that there would be a plethora of robots employed, in the same way as they are at NASA for example,” Stolkin continued. “However, there is almost nothing at any nuclear plant anywhere in the world that you would recognise as a robot.

“The reason that manufacturing has been able to undergo this robotics revolution is because it’s a very structured, constrained and precise environment. Nuclear waste on the other hand can resemble nothing more than a heap of junk.”

When factors such as these are considered you can start to see how profoundly intellectually complex handling such an unstructured environment is. And this is where the NCNR is picking up the mantle - a research consortium set up to solve these types of problems using the very cutting edge of international robotics and AI research.

“If we don’t develop robots beyond the current state-of-the-art the plan for cleaning up the UK’s nuclear waste over the next 120 years will call for a further estimated one million entries of human workers into contaminated zones wearing air-fed plastic suits,” added Stolkin.

As mentioned it is extremely uncomfortable and exhausting for humans to work in the nuclear waste sector, in fact workers in air-fed suits are only able to operate for a maximum of two hours per day. In addition, the industry predicts that in order to deal with the UK’s legacy nuclear waste it will require a further one million entries of human workers in air-fed suits. 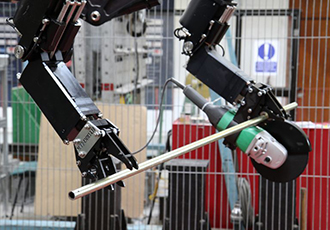 Not only must human workers carry and deploy heavy duty cutting tools in these environments, there is also the risk of exposure to toxic dust and radiation. In addition, the contaminated suits become secondary nuclear waste, and 11 containers of secondary waste are generated per container of original waste that is decommissioned - a case of one step forward, three steps back!

“All of those containers have to go into long-term storage where they have to be monitored, packaged and looked after – all at enormous cost to the tax payer,” Stolkin continued. “We also have a moral obligation to stop sending people into these unpleasant working conditions (we no longer send children up chimneys for example) and we also have a duty to the environment and the tax payer to stop this secondary waste burden.”

So the NCNR has been designed to develop robots that are smart and capable enough to go into the hazardous zones that humans can’t and perform the complex operations that are needed to handle the nuclear waste that humans cannot come into contact with.

The NCNR is a nationwide consortium of ten research institutions, from Scotland to the south coast. Stolkin added: “We bring together the top experts in the country in not only robotics but also associated elements such as AI and machine learning, sensors, electronics, and embedded systems. The aim of our work is to make nuclear operations, safer, faster and cheaper.”

As the lead organisation of the centre the University of Birmingham has just completed a new £3m robotics laboratory featuring 1,000sq metres of dedicated space, featuring an extreme lab dedicated to developing robotics for harsh environments such as nuclear.

This network of universities is bringing together an incredibly broad spectrum of expertise over a huge breadth of different technologies and skills. “We are at the international frontier (in terms of academic research),” added Stolkin. “This is coupled in parallel with real hands-on, practical problem solving. You usually get one without the other and it’s rare to see them together.

“We’re not just developing new technology for the sake of it, but rather for human, societal, moral and ethical reasons. And, from the point of view of environmental stewardship and cleaning up the environment for future generations, this is a powerful motivation for us.”

Within the first 18 months of its existence, the NCNR has published 100 peer-reviewed scientific papers. At the same time it has achieved deployments of robots on real nuclear sites all over the world. In addition, the network has also been working directly with industry, undertaking commercial work.