Home > Industries > How can the UK avoid missing the robot boat?
Robotics

How can the UK avoid missing the robot boat?

Figures from The British Automation & Robot Association (BARA) have revealed that robotic sales in the UK in 2018 were down by around 15% from the previous year. The automotive sector has a big say in these annual figures due to the large number of robots installed into the manufacturing processes of that industry.

However, between 2017 and 2018 the automotive industry largely bought the same number of robots, so this reduced figure was not influenced by this sector. “In general, the trend in robotics is going up, but it is a bit disconcerting that last year we sold less robots into UK manufacturing than we did the year before. Of course, Brexit maybe a contributing factor to this with people delaying investments etc, but it will be interesting to see what happens this year.”

“This is a real challenge,” continued Wilson. “Robot installation was around 13% down in the UK last year than it was the year before, which is in stark contrast to the rest of Europe as a whole, whose robot installation was around 18% higher over the same period.” This is certainly a worrying collection of statistics, as not only was the UK’s installed robotic figures down on the previous year, they appear to be heading in the opposite direction to the rest of Europe.

These figures are even more concerning when you look further afield, with significant automation investment occurring in countries such as Singapore, China, the US, and South Korea, who are installing more robots than any other country in the world. So, something is not quite right in the UK.

In this country there is the perception that robotic automation is difficult, hard to use, and risky. Combine this with a need to achieve short term returns and a lack of investment in capital equipment, results in the UK’s productivity coming up short when measured against its major competitors. “We’re well behind the US, Italy, France and Germany. Our employment level is very good, but we’re not as productive, and that is going to be a challenge in terms of our competitiveness going forward.”

In addition, the UK has focused on using low cost labour – bringing in lots of people into UK manufacturing from overseas which is seen as a barrier to introducing automation. It’s impossible to predict the impact of Brexit but one thing we are seeing is the gradual departure of this low-cost labour.

“Economies that this labour had originated from are growing, our exchange rate is not particularly good, and therefore these people can earn more in places like Eastern Europe than they can here. So, if we don't do something about our productivity we’re not going to be able to bring in lots of new people and we’re going to have to find an alternative - and automation is the obvious one,” said Wilson.

With this in mind, the Government has an industrial strategy, which led to the Made Smarter initiative identifying that Industry 4.0 is worth over £455bn to the UK economy over the next ten years, with robotics and automation making a contribution of £184bn. It launched its North West pilot late last year which is aimed at providing support to manufacturers within that area to apply Industry 4.0 technologies. The Government has also increased the annual investment allowance to £1m from January 2019, which is going to make it much more economical for companies to invest in equipment.

“We need to do something about the current situation if we want to be successful going forward,” said Wilson. “We need to make UK manufacturing as competitive as possible and that’s about appropriate automation. Not robots for everything, but robots for some (and more) applications, in order to close the gap.”

Collaborative robots have generated a lot of headlines and interest within manufacturing as they help to remove the robot fear factor. As the name suggests, they are intended to be used in collaboration with human workers rather than instead of. They tend to be easier to install and use, are less risky, more flexible and have less of an impact on existing production facilities.

They are by no means a silver bullet solution as they tend to be most well suited for smaller batch sizes, applications that require human intervention, relatively low payloads and precision, and they tend to be slower.

The key to this is that they are often user installed rather than installed by system integrators. So, it is important that the appropriate risk assessments are made prior to installation, as it would be wrong to assume that just because a robot is collaborative, it is safe. 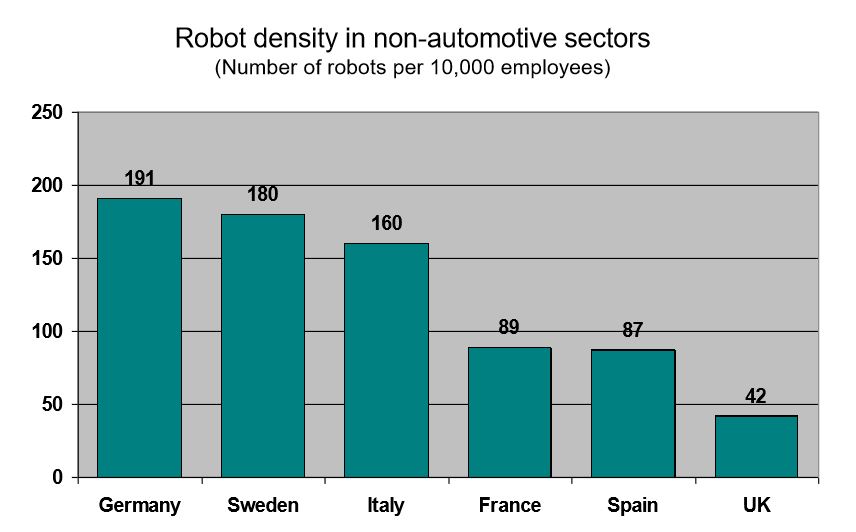 “There is still a place for industrial robot applications,” added Wilson. “Industrial robot sales are significantly bigger than co-bot sales and they will remain so for some years. They tend to be used in higher volume, and are used in more arduous and dangerous applications, where you don’t need human intervention.

“An industrial robot carries more payload, works faster and is more repeatable and therefore, in applications where you don’t need people to be involved, they are a far better solution, and they tend to be installed by professional integrators, because you have to get the safety and control systems around the robots correct.”

So, despite the rather concerning numbers in the UK, interest (particularly in collaborative robots) is growing, as organisations are beginning to look at how robotics can be implemented into their processes (albeit a bit later than other countries).

However, the current supply chain is not without its constraints. Wilson continued: “The system integrators that we do have are very busy, and because we don’t install an awful lot of robots in the UK, we have a relatively small supply chain in terms of having the ability to deliver those robotic systems.”

In addition, BARA has also highlighted that the end users themselves lack the knowledge and the required expertise. “I spend quite a lot of time walking around factories at the invitation of end users, telling them where they might install robots, what are the best applications to start with, and who they might talk to in order to actually get those robots installed.”

Wilson explained that this lack of knowledge means that it has become difficult for organisations to produce the correct specifications. “They tend to just go to their suppliers with a request for a robot,” added Wilson. “This can be very dangerous because if you don’t tell the systems integrator what you want, the chances are they are not going to deliver it. So, the ability to provide the correct specifications is important.”

Wilson highlighted the importance of educating the industry and this is a gap that BARA are trying to fill. BARA has produced a number of how-to guides, in terms of implementing robotic systems and providing access to independent consultants, so if companies want to understand what they should do they can talk to experts who can help them through those early stages and help write those specifications.

“What we’ve launched recently is the Certification of Systems Integrators,” continued Wilson. “This is all about identifying who the good system integrators are. It’s based on a model that the Robotic Industries Association (RIA) of the US has developed. It’s been in operation in the US for a number of years and they’ve already certified 36 systems integrators.”

The intent is to help integrator companies demonstrate that they are capable and operate to the relevant standards. It also helps the end users find those qualified integrators, and as such, there is now a mark that indicates that an integrator meets those standards.

“It’s been successful in the US and what we’re doing is bringing it into the UK. One of the programme’s key elements is that there is an on-site audit. So, we will send auditors to that integrator to check their qualities and confirm their expertise and capabilities, and the capabilities of some key technical people (each integrator who gets the certification has to have at least two technical experts).”

The aim of the certification scheme is to make sure the safety standards are understood, and that a risk assessment is performed on every system developed. In the UK the audits will be carried out by qualified personnel from the Manufacturing Technology Centre and the Advanced Manufacturing Research Centre. These individuals have been checked by the RIA in the US to make sure that what we do in the UK meets the standards of the programme that already exists.

The certification is limited to two years, after which the integrators will have to go through the same process. “People move on and organisations change so the certification has to be repeated to ensure standards are being maintained,” Wilson added.

BARA has introduced the certification to allow the capable integrators the ability to differentiate themselves and to justify the value of what they do. Wilson added: “The fact is that a lot of UK businesses will buy purely based on price if they don’t know any different. So, this certification allows the integrators that are good to justify their higher price for the service they are providing.

“Ultimately we hope that it will increase the integration capability in the UK because we will have more integrators delivering more appropriate solutions that will keep the end users happy - overall enhancing the market for robots and automation in the UK.”

The goal of course is to increase the competitiveness of UK manufacturing and for Wilson, the key to that is to invest in automation - working smarter not harder. Giving our workforce the tools they need to be more efficient and effective.

For those that are still sceptical about the introduction of robotics, the saying goes ‘sweat the assets, not the people’. The message being, invest in equipment, give your workforce the right tools, and if you do that, they will be more efficient and productive, the business will be more competitive, and it will grow.