The market for tethered UAVs and drones is growing at a significant rate. Predicted to grow 61% year-over-year in 2020, the growth is due to the increasing amount of applications and use cases that can benefit from a persistent aerial platform.

Unlike their run-time limited untethered counterparts, tethered UAVs do not need to carry their primary power source, increasing their payload capacity.

They can maintain high levels of endurance up to 24 hours, at heights up to 200m, and in most weather conditions. Applications include traditional security, intelligence gathering, and surveillance use cases among many. Their prolonged flight capability makes them suitable for provisioning emergency telecommunications networks during a humanitarian crisis, monitoring firefighting across a large industrial complex, and filming sizeable outdoor sporting events. As tethered UAVs find new applications, so the technical challenges grow.

The desire to integrate more capabilities within a UAV increases the payload weight, and the benefits gained by extending the operational height imposes more tether drag. Also, raising the flight time dictates enhanced safety monitoring, provision of a backup power source, and safety features such as a parachute.

Powering a tethered UAV presents some technical challenges. The UAVs power requirements are the rotor drive motors, control electronics, and the payload application, of which the motors represent the largest proportion of the available power budget. Passing enough power through a long tether introduces transmission losses due to the resistance of the cable.

Achieving the maximum payload requires that the drag weight of the tether be kept to a minimum, placing constraints on the conductor thickness. Thinner conductors increase the cable resistance, which as operating height increases become more significant.

To achieve the power delivery requirements of the UAV, the only viable option that keeps distribution losses low is to transmit a high voltage along the tether and perform power conversion to the desired levels within the UAV. With weight as a critical constraint, the power conversion components also need to be lightweight.

The use of a high DC voltage lowers the current flowing in the tether (I = P/V), allowing small tether conductor diameters, and reducing the I2R losses. The trend in the industry is moving towards transmitting up to 400 VDC in the tether and using one or more DC/DC converters in the UAV to power the rotor motors and application circuitry.

Selecting a DC/DC with a high voltage input

There are many DC/DC converters available from a range of suppliers but finding one that can accommodate a voltage input as high as 400 VDC narrows the available options considerably. The converter also needs to have a wide conversion ratio, down-converting to, say, a 48 VDC output.

One example of a DC/DC converter suitable for this task is the Vicor BCM6123 series of high voltage bus converter modules.

The BCM6123 series has a fixed conversion ratio, termed the K factor, and is highly efficient, typically 98%. For example, the BCM6123xD1E5135T01 accepts an input voltage up to 400 VDC, has a K factor of 1/8, and is capable of delivering up to 1,750W. Fixed-ratio converters, also called bus converters, do not typically incorporate voltage regulation of the output, although this can be achieved by further downstream DC/DC converters as required.

Because fixed-ratio converters do not include voltage regulation components, they have the potential to be highly efficient and exhibit higher power densities. Less waste heat simplifies the need for thermal management too, which can further reduce weight. 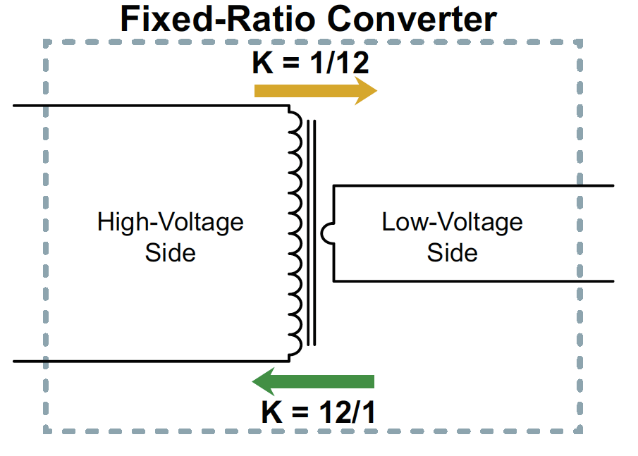 Figure 1: A fixed-ratio converter can step-up, and step-down an input voltage and is suitable for bidirectional power conversion. (Source: Vicor)

Figure 1 illustrates an isolated fixed-ratio converter with a K factor of 1/12. Due to the design of a BCM series, they can be used to either step up the voltage or step it down. Note that should it be required to operate in reverse, creating a high voltage from a low voltage source, the converter needs to be started in the normal forward mode first. In this example, a 400 VDC input achieves a 33 VDC output.

Likewise, a 33 VDC input to the low voltage side yields a 400 VDC output. Vicor BCM series fixed-ratio converters can be configured in parallel to meet the need for higher output power, or in series to provide a higher output voltage.

All the BCM series use a sine amplitude converter (SAC) topology to deliver high levels of conversion efficiency. Most DC/DC converter topologies use the duty cycle of the converter's pulse width modulated (PWM) switching drive circuit to control the secondary power output. For the practical constraints of keeping switching device losses to a minimum, the PWM frequency is no more than several hundred kHz.

SAC is a transformer-based resonant topology. The switching converter operates at the fixed resonant frequency of the primary-side LC equivalent circuit. Performing switching at the zero-crossing points eliminates power losses with the switching devices, significantly improving conversion efficiency as well as reducing the generation of high-order noise harmonics.

Unlike varying the PWM duty cycle which uses a square wave drive signal, a SAC converter uses a much higher frequency, typically several MHz, and adjusts the amplitude of the drive signal to accommodate increased output loads. Using a higher switching frequency further aids decreasing the transformer size, which in turn is lighter.

The circuit characteristics of the tether cables require investigation as part of the design process, the critical factors being the resistance, capacitance, and the inductance per unit length.

Short tethers act as a bulk LCR circuit, but longer tethers are more like a transmission line with distributed LCR attributes. Simulation of the tether can assist in dealing with the transmission line effects, particularly with regards to input surges during initial switch on.

Correct termination of the tether with an output filter can mitigate the impact of input surges to the UAV. Generally speaking, if the rise time of a power spike is more than ten times the line delay, the tether cable would be considered as short.

A practical example of powering a UAV

Figure 3 below highlights a simplified functional diagram of a high voltage DC transmission solution for a UAV. A 400 VDC supply to the UAV uses four BCM6123 fixed-ratio bus converters to provide isolation and a 48 VDC bus supply. The bus voltage directly supplies the rotor motors, and two DCM DC/DC converters convert the 48 VDC bus voltage into separate 12 VDC and 24 VDC regulated supplies to power the control and telemetry electronics and the UAV's video camera.

Figure 3: Example application to power a UAV via a 400 VDC tether.

With this configuration, an on-board 5 kW supply with a power density of 2,750 W/in3 was achieved, with a total power converter weight (4 x BCM and 2 DCM) of only 222 grams.

The bi-directional capabilities of the BCM converter also make it suitable as the ground power source for the UAV. Powered from a 48 VDC battery will provide the 400 VDC for the tether supply.

High voltage, fixed-ratio bus converters are a highly efficient way of providing power to a tethered UAV. With minimal heat sink requirements, a space-saving approach, and their low weight, they allow UAV design engineers to maximize the payload capacity and reduce the tether drag.