The delivery of tomorrow’s clean electricity will be through an infrastructure characterised by diverse and widely distributed generating sites and predicated on technologies that must deliver continuously increasing performance and energy efficiency. Mark Patrick, Mouser Electronics, explains.

Global electricity consumption, currently about 27TWh per year, is set to rise 40% by 2040 according to figures from the International Energy Authority (IEA). Major drivers for this increase include growing prosperity in the developing world, giving rise to middle classes that view high-quality housing, lighting, information, and entertainment as essential. Worldwide, including in developed regions, electrifying transportation is a pivotal aspect of decarbonisation to combat climate change.

Harnessing renewable energy sources more extensively and creatively than ever before is essential to satisfy this increased demand. Meeting the demand using conventional power stations running on fossil fuels is not workable. Fossil fuels are a finite resource, and growing reliance on them will drive up greenhouse gas emissions, preventing the world achieving its carbon reduction goals.

Fortunately, the world has been getting better at harnessing renewable sources such as solar, wind, and wave energy. Figures from IRENA, the International Renewable Energy Authority, show that installed capacity for wind-power generation has risen from 180,000MW in 2010 to 622,000MW in 2019, while solar has increased from 41,000MW to 541,000MW.

Today, all renewables, including hydro, wind, and solar, provide 8TWh of electricity in total. While this is more than enough to satisfy worldwide residential needs, industrial and services sectors present another 16TWh of demand. The IEA states that renewable generation should be 26TWh by 2040.

Increasing reliance on solar, wind, and tidal energy calls for the ‘shape’ of the electricity supply infrastructure to change. Ambient energy sources must be captured and converted in situ, unlike fossil fuels extracted from the earth, processed/refined, and transported as energy-bearing media to a centralised location (power station) for conversion into electricity. By necessity, the new generators will be smaller, more numerous, and more widely distributed. There is also the potential for a privately-owned capacity to supply local microgrids, which can offload the primary grid as an aid to stability, while even feeding-in unused energy to the primary grid.

While small domestic and commercial rooftop solar generators can be scaled to meet some or all of an individual premises’ needs, utility-grade solar farms need to be significantly larger. The most extensive examples in operation today are the Bhadla Solar Park in India and China’s Tengger Desert solar farm. Although they can generate as much as 1.5GW, comparable to some nuclear power stations, each occupies an area of more than 40 square kilometres.

As far as wind is concerned, offshore locations are suitable for building large wind farms and provide the added benefit of higher wind speeds than are typical at onshore locations. Wind turbines have a minimum cut-in speed, typically three to four metres per second (seven mph). Designers must also provide additional protection against excessively high wind speeds. Today’s largest offshore wind farms are in European waters and include the London Array off the UK’s Kent coast and the Walney Wind Farm located in the Irish Sea. Each produces over 600MW.

Wave and tidal generation are additional alternatives that could offer enhanced dependability because tides flow continuously due to the moon’s gravitational effect. The European Commission state that wave and tidal could supply around ten percent of the EU’s energy needs by 2050. There are costs and risks involved, however. Undersea generators need fixing to the seabed and the impact of generator noise on the marine environment and the potential effects on tidal flows, are uncertain.

Besides considering the location, there is also a real-time aspect to generating electricity from ambient sources: solar and wind generators can be active only when the wind is blowing or when the sun is shining. Large energy storage systems (ESS) must be associated with the grid to ensure constant availability. Battery-based storage can respond quickly to satisfy fluctuating demand, so charging large battery arrays is a popular option. These can be collocated at generating sites and installed at other locations such as customer premises; known as ‘behind the meter’. IHS Markit has forecast global grid-connected energy storage to rise to over 15GW by 2025, increasing more than five-fold compared to 2019.

While small behind-the-meter installations can comprise lead-acid batteries, which are inexpensive and require minimal maintenance, suggestions include using end-of-life Li-ion electric vehicle batteries in larger utility-grade ESS. Although deemed unsuitable for use in EVs after their capacity has diminished to about 80%, the prospect of utilising that remaining 80% could be a responsible way to manage precious natural resources. On the other hand, there are significant costs associated with repurposing the batteries, including identifying and removing dead cells. Some believe that straightforward recycling and material reclamation is the better option and that new Li-ion batteries are both more cost-effective and more space-efficient for ESS applications.

A successful strategy is likely to have multiple facets, including reused batteries, new batteries, and already deployed grid-connected storage. Aspects could include the privately owned uninterruptible power supplies (UPS) installed in commercial premises and electric vehicles when connected to charging stations. Owners can allow utilities to access these assets’ storage potential in exchange for a feed-in tariff or other rewards.

Installed capacity based on renewable energy could feature more numerous sites producing relatively low MW power positioned in geographical locations dictated by nature, often with nearby ESS. Increasing yield by raising the efficiency of the various power-conversion and conditioning systems on-site will be vital in satisfying the future’s rising energy demands, achieving this through optimisation of architecture, topology, and power semiconductor technology.

A PV panel array requires power-point tracking, DC/DC conversion of the typically low-voltage raw panel output, and subsequent DC/AC inversion to produce an AC voltage of the correct amplitude and frequency to feed into the grid. The power conditioning network may comprise a standalone DC/DC converter with power-point tracking. Alternatively, integration of these functions can be in a panel level microinverter, a string inverter that handles the output from several panels, or a centralised inverter fed from multiple strings of panels.

For their part, wind generators can be connected to the grid typically using either a direct-fed (DF) or full-converter (FC) connection. The DF connection has featured for some time in installations up to about 6MW. The generator’s stator is connected directly to the grid while its rotor connects through a converter/inverter network. The generator output frequency matches that of the grid. Only about one-third of the generated power passes through the converter/inverter, allowing the equipment to be smaller and lower cost.

In the FC connection, the converter/inverter carries the full generated power and completely decouples the generator and the grid. This configuration is compatible with fault-tolerance techniques such as low-voltage and high-voltage ride-through (LVRT, HVRT) that allows the generator to remain connected during disturbances such as voltage fluctuations caused by external events. As the energy supply becomes more dependent on wind, this is desirable to help prevent blackouts. The FC connection is suited to installations in the 10MW range, and wide deployment for wind power in both onshore and offshore plants is predicted. 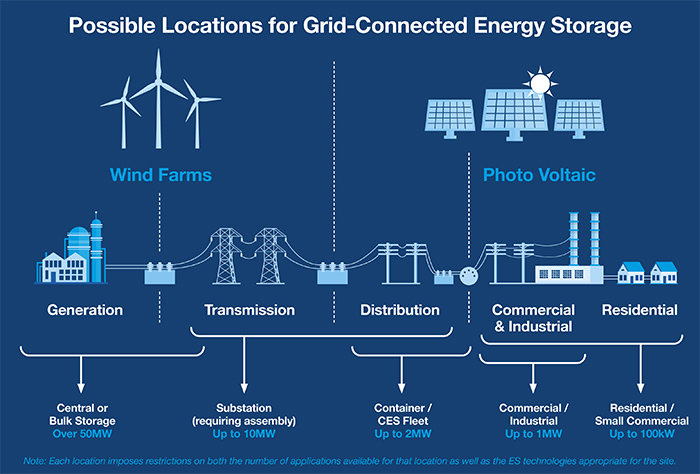 Conditioning the DC output from the PV panel, including power-point tracking, can be implemented as a standalone DC/DC converter or an integral part of the inverter that handles the transition from DC to AC suitable for connection to the grid. The inverter implementation can be a microinverter at the panel level, a string inverter fed by multiple panels, or a single central inverter. The configurations have various strengths and weaknesses relating to cost, reliability, and efficiency. Seeking to minimise the energy losses from every box, engineers continue to research new power topologies, utilising techniques such as synchronous rectification and zero-voltage switching that help avoid unwanted power dissipation.

Additionally, wide-bandgap power semiconductor technologies such as silicon carbide (SiC) and gallium nitride (GaN) are now redefining the trade-offs power designers have traditionally made. SiC MOSFETs rated at voltages up to 1,200V have significantly lower on-resistance and switching losses than conventional silicon alternatives such as insulated gate bipolar transistors (IGBTs). SiC also has higher thermal conductivity than silicon and can withstand a higher maximum operating temperature. Designers can take advantage of these properties to simplify thermal management and increase power density while ensuring reliability.

GaN power transistors allow an even more significant reduction in switching losses and can support higher switching frequencies, at voltage ratings up to 600V. Energy losses are much lower than in SiC or silicon transistors when the device is conducting in reverse. Additionally, with a zero reverse recovery period, GaN transistors are suited for high-efficiency converter topologies such as totem-pole power-factor correction (PFC) circuits that eliminate the losses associated with a conventional silicon bridge rectifier.

Many small steps to success

By continually improving equipment performance and efficiency at every stage of the power infrastructure, from PV panels and wind turbines to ESS and new power electronic technologies such as SiC and GaN, clean, renewable sources promise the ability to satisfy the bulk of our energy demands going forwards. However, the gradual transition will require renewables and conventional power stations to coexist within utility grids for some time to come.

During this transition, carbon-capture technologies can help prevent undesirable emissions from conventional power stations entering the atmosphere. Such technologies already capture as much as 40 million tonnes of CO2 in this way, and chemical industries and product manufacturing reuse it. This figure could increase to 130 million tonnes through projects planned for the future; a further contribution in the move towards clean energy with net-zero emissions.

Meeting the world’s needs will require a mix of energy sources and marshalling techniques. Solar and wind power are vital exponents in meeting future demand. Diminishing conventional capacity, coupled with increases in the availability of other renewable sources, such as biofuels, geothermal, hydro, and hydrogen, will all be part of the mix: clean, economic, and accessible energy whenever and wherever it is needed.