Kenya’s Renewable Energy Auctions Policy (REAP), launched in early 2021, is expected to expand Kenya’s renewable power capacity over the next decade, with GlobalData forecasting growth from 1.4GW in 2020 to 3.7GW in 2030.

GlobalData noted that this means a remarkable compound annual growth rate (CAGR) of 10.5%.

GlobalData’s report, ‘Kenya Power Market Outlook to 2030, Update 2021 – Market Trends, Regulations, and Competitive Landscape’, notes that favourable government policies such as REAP, which applies to solar and wind power projects of all capacities and for other renewable projects larger than 20MW, are helping Kenya move towards its target of increasing the share of renewable electricity generation to 100% by 2030.

Rohit Ravetkar, Power Analyst at GlobalData, said: “Kenya’s renewable power sector has grown substantially in recent years, growing at an impressive CAGR of 13.1% from 2015 to 2020, due to several government incentive programs and subsidies. However, the country won’t quite reach its electricity generation target due to the growth of gas-based power generation, which is expected to grow significantly during the 2021 to 2030 period from 69GWh in 2020 to 1,190GWh in 2030.

"The country is set to decommission several oil-fired plants and replace them with gas-fired plants to reduce emissions. Meanwhile, Kenya’s renewable electricity generation is expected to reach a share of 90.1% in 2030.” 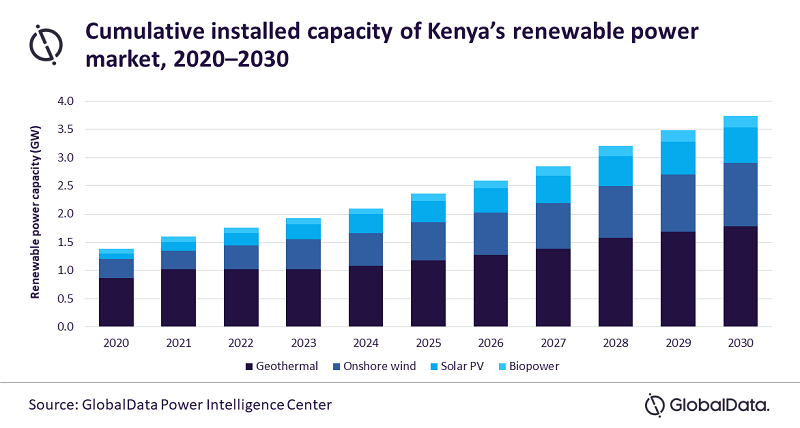 Some of the programs and subsidies offered by the Kenyan government included tax reliefs, feed-in tariffs, and favorable power rates for renewable power.

Ravetkar continued: “By introducing these incentive programs and funding mechanisms, the government is reducing the cost of renewable power generation by exempting solar, wind, hydropower and solar thermal equipment from import duties and value-added tax. Kenya has abundant geothermal resources, something that the government is depending on to meet a large part of its power demand by 2030.”