How can utilities use data centricity and a software databus to create an interoperable ecosystem of Distributed Energy Resources (DERs)? RTI presents an approach based on the Data Distribution Service (DDS) set of standards, which is used by industrial companies to solve problems exactly like the challenges that DERs present in the era of the Industrial Internet of Things (IIoT).

The energy sector is undergoing an unstoppable disruption in traditional power generation sources and processes. For over a century, the industry has owned energy generation plants. Now, power generation from Distributed Energy Resources (DERs) sourced from solar, wind, natural gas and water are increasingly supplementing (and even replacing) these power plants. Hundreds, thousands, and even millions of DER endpoints are entering the market and connecting to the grid.

A DER is any resource on the grid that produces electricity and doesn’t fit the formal North American Electric Reliability Corporation (NERC) definition of the Bulk Electric System (BES).

One major consideration is that the majority of DERs are not owned by utilities. They contribute energy to the grid, but the utility has limited ability to see or control these individual power generation sources. DERs are proliferating at a rate that no one can accurately predict. Therefore, it’s difficult for utilities to predict the impact on their operations.

As in any industry, there are forward-thinking companies that are boldly embracing new business models and approaches. There are also utilities that continue to take a wait-and-see-attitude toward DERs. Regardless of how utilities are individually approaching DERs, one thing is clear: The industry is rapidly moving beyond questions of ‘if’ to ‘how’.

Integrating data provided from DERs into decades-old legacy systems presents numerous technical challenges. As shown in Table 1, DERs are largely incompatible with traditional utility systems and processes. If utilities can manage or neutralise these differences, all of the necessary information can be visible. Gaining visibility is the first step to convert DER data into actionable information.

As described above, and in terms of volume of discrete endpoints, DERs already outnumber traditional energy-generation sources. These endpoints are also likely to be incompatible with traditional systems in terms of protocol, platforms, operating systems and more. In short, they simply don’t have the characteristics to act like traditional utilities systems and fit neatly into the traditional hub-and-spoke model.

Utilities can’t afford a lengthy hand-holding process to connect and integrate each new DER that connects to the grid. PnP functionality – such as a user’s experience when purchasing a new mobile phone today (very automatic) – will be necessary. Further, instead of working with individual DERs, utilities should look at developing a holistic collection of DERs as an ecosystem.

An ecosystem is usually characterised by diversity. It is also dynamic, constantly growing and changing. This certainly fits the characteristics of DERs. For utilities, the technical challenge is to create an ecosystem of DERs that can easily interoperate with traditional systems and processes. With PnP capabilities, utilities can onboard new DERs automatically and at scale. The data generated from the DERs – such as energy produced, frequency, voltage, etc. – can then be collected, analysed and utilised by traditional systems.

This requires a new communications framework to handle the flow of data between the expanded ecosystem and legacy systems. This data-centric framework – new to utilities – is based on DDS, the highly-reliable industry standard that manages communications of disparate, high-volume endpoints that define the Industrial Internet of Things (IIoT). Developed by the Object Management Group, DDS is widely deployed across multiple industries under the IIoT. DDS provides a proven way to manage high volumes of data for industrial applications, through an open integration data-centric framework for software applications.

Data centricity and the software databus

As illustrated in Figure 1, a data-centric communications architecture connects DERs to the databus, not to each other, using a publish/subscribe process. The data is gathered from the different DER (both utility owned and not) and shared on the connected DDS databus. In turn, databuses can be layered and data can be routed while fully secured, to the appropriate databus. 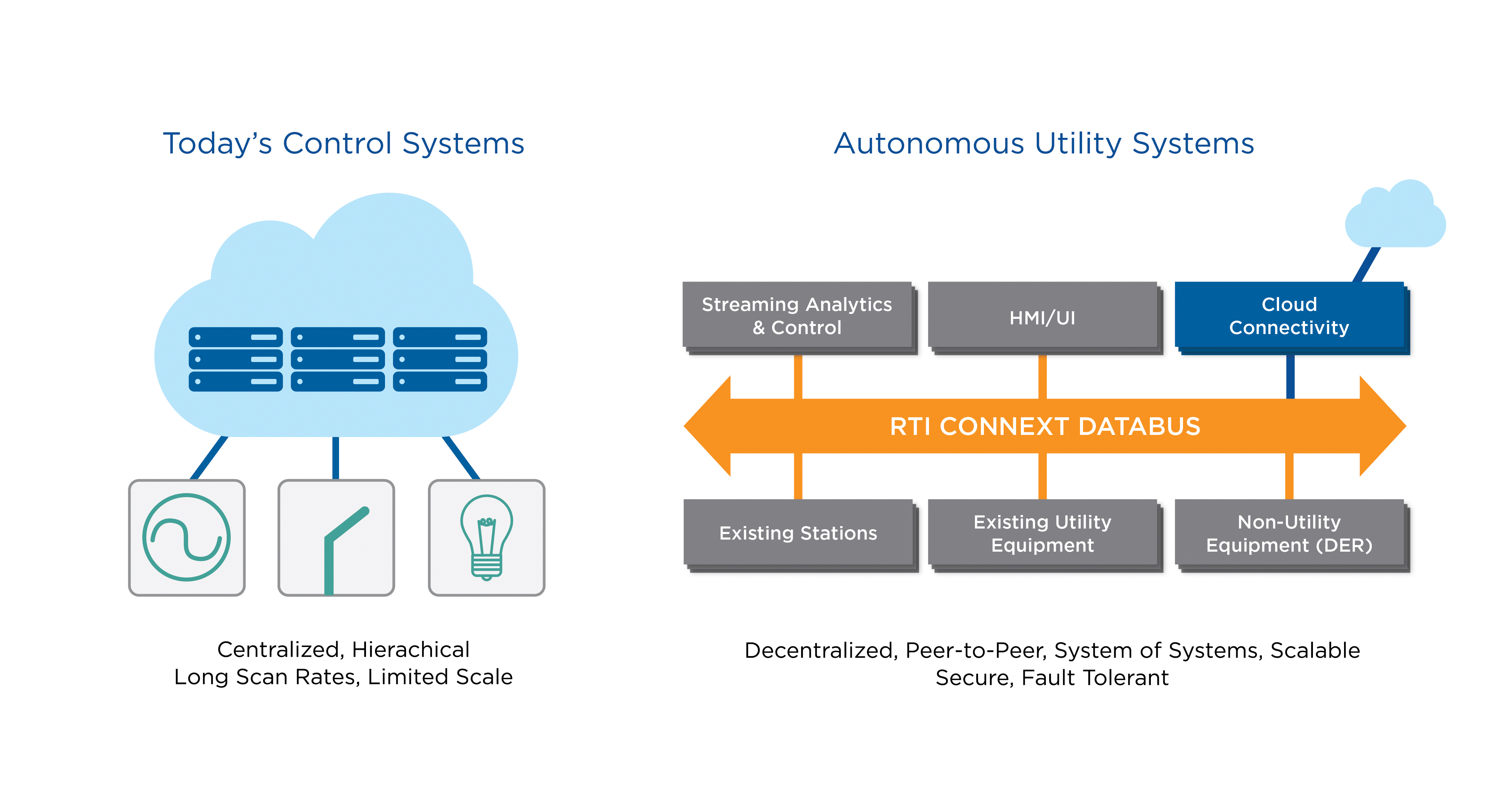 From there, it is available on utility owned/run computers for analysis. The DDS architecture protects the legacy systems from externally-generated data, through a series of publish/subscribe rules and security protocols. It also protects the utility from an overload of data. In a data-centric model, data and services aren’t tightly coupled to a specific device, setting the stage for a decoupled, PnP architecture. DDS is not dependent on servers or brokers – it is a true distributed system with no single points of failure.

In a complex, data-intensive DER ecosystem, this means that data discovery is automatic. Data and services can flow to multiple locations. Applications can join, leave or change locations and IP addresses, and so on. The databus automatically manages the correct flows.

With a databus, utilities can accomplish a number of tasks:

As shown in Figure 2, the databus accommodates those requirements, enabling designers to utilise legacy, current and future equipment/devices. There’s no need to rip and replace existing systems. 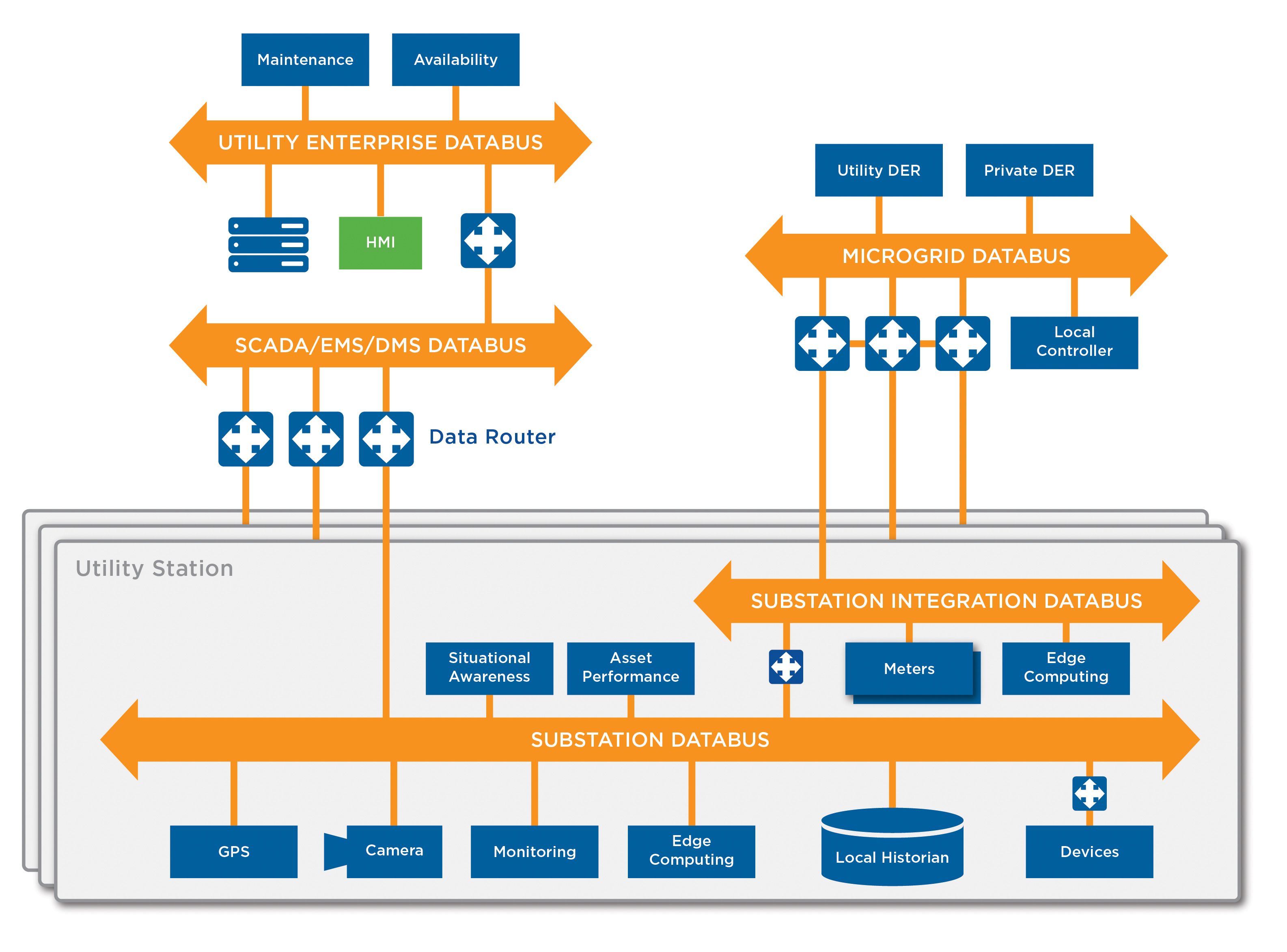 A significant benefit of the databus is its scalability to accommodate changes in size/scale. The databus eliminates the need to send messages through brokers or other intermediaries, providing a very clean and efficient way of handling high-volume information flow.

The DDS databus provides efficient filtering based on virtually any set of criteria, such as high priority and low priority data, thresholds and priorities. However, filtering and prioritising data is not going to be a static or fixed requirement. The need for information can change in the moments before or after a power failure.

Efficient data filtering and prioritisation uses bandwidth more efficiently. Instead of investing in bandwidth that doesn’t get used, the databus has the ability to balance the flow of data using filtering. For example, the utility can define rules to limit traffic to only necessary or critical data. It can add policies for peak volumes.

Bandwidth and security have a lot in common: adding more of either one is usually expensive but not always more effective. In the case of security, a lot of layers and mechanisms add management complexity, which translates to increased operational costs. Complexity can also introduce unintentional, exploitable gaps.

Extending the existing networks and security models that protect centralised legacy systems today to new/future DERs is impractical. The scale (and corresponding cost and complexity) is simply too large. The DDS databus is designed for highly distributed, high-volume, highly diverse environments. Because the databus deals with data, not applications, it’s possible to apply fine-grained security at the data level. For example, if the data is confidential, it can be encrypted, authenticated and checked for data integrity, whereas non-confidential data may only need authentication.

A year from now, the number of DERs will have grown. That’s a given. However, the rate of growth for each utility’s coverage area is unknown. The types of endpoints are also unknown. By implementing a DDS databus connectivity framework, utility companies can incorporate new functionality into their legacy operations — one that delivers secure, interoperable information flow, at scale.

What every utility gains by putting a standards-based databus in place today is easy response today and preparedness for whatever comes tomorrow. The databus is a forward-looking platform that assumes growth. It allows utilities to start with a goal of visibility and move rapidly toward more strategic, multi-faceted use of a broader DER-based ecosystem.

Through this data-centric approach, utilities will have a wealth of information they didn’t have previously about these unowned DERs. This data can be incorporated into the analytics for long term planning. It can add immeasurably to accurate modelling and studies.

With this real world data, utilities are in a position to have more fruitful discussions with policy makers, potential partners, the public and others. In this way, the utility leaders will demonstrate that knowledge truly is power.