How is space exploration improving life on Earth?

Andy Bowyer, Director, Kleos Space and Magna Parva, talked about the key effects of space exploration to life on Earth, at the Codex event 'World's Top 50 Innovators from the Industries of the Future', held in London, on the 27th September, 2017.

A new commercial pathway is revolutionising and opening access to space, fostering America’s new space economy in low-Earth orbit. For the first time, the market is expressing what research can and should be done aboard the microgravity laboratory without direct government funding. The Center for Advancement of Science in Space, or CASIS, manages half of the crew research time via the ISS National Laboratory and is filling the pipeline with a wide variety of commercial research and payloads.

More than two-thirds of these projects to date have required zero funding from CASIS, and that trend is increasing. In addition, a significant portion of the commercial research taking place aboard the station is made possible by NanoRacks hardware.

The company has invested privately and raised capital to provide laboratory facilities for small payloads, including CubeSats deployed from the space station, that make research faster and more affordable.

NASA’s move to purchase commercial cargo resupply and crew transportation to the space station enables U.S. businesses to develop a competitive capability they also can sell as a service to others while freeing NASA resources for deep space exploration. Private sector participation provides a new model for moving forward in partnership with the government.

The commercialisation of this station-related technology has provided aid and disaster relief for communities worldwide. The Water Security Corporation, in collaboration with other organisations, has deployed systems using NASA water-processing technology around the world.

There are more than 100,000 proteins in the human body and as many as 10 billion in nature. Every structure is different, and each protein holds important information related to our health and to the global environment. The perfect environment in which to study these structures is space.

Microgravity allows for optimal growth of the unique and complicated crystal structures of proteins leading to the development of medical treatments.

An example of a protein that was successfully crystallised in space is hematopoietic prostaglandin D synthase (H-PGDS), which may hold the key to developing useful drugs for treating muscular dystrophy.

This particular experiment is an example of how understanding a protein’s structure can lead to better drug designs. Further research is ongoing.

Bringing space station ultrasound to the ends of the Earth

Fast, efficient and readily available medical attention is key to survival in a health emergency. For those without medical facilities within easy reach, it can mean the difference between life and death.

For astronauts in orbit about 250 miles above Earth aboard the International Space Station, that problem was addressed through the Advanced Diagnostic Ultrasound in Microgravity (ADUM) investigation.

In partnership with the World Interactive Network Focused on Critical Ultrasound (WINFO-CUS), ADUM principal investigator Scott Dulchavsky, M.D., is taking techniques originally developed for space station astronauts and adapting them for use in Earth’s farthest corners by developing protocols for performing complex procedures rapidly with remote expert guidance and training.

Laser surgery to correct eyesight is a common practice, and technology developed for use in space is now commonly used on Earth to track a patient’s eye and precisely direct the laser scalpel.

The Eye Tracking Device experiment gave researchers insight into how humans’ frames of reference, balance and the overall control of eye movement are affected by weightlessness. In parallel with its use on the space station, the engineers realised the device had potential for applications on Earth.

Tracking the eye’s position without interfering with the surgeon’s work is essential in laser surgery. The space technology proved ideal, and the Eye Tracking Device equipment is now being used in a large proportion of corrective laser surgeries throughout the world.

The delicate touch that successfully removed an egg-shaped tumor from Paige Nickason’s brain got a helping hand from a world-renowned arm—a robotic arm, that is. The technology that went into developing neuroArm, the world’s first robot capable of performing surgery inside magnetic resonance machines, was born of the Canadarm (developed in collaboration with engineers at MacDonald, Dettwiler, and Associates, Ltd. [MDA] for the U.S. Space Shuttle Program) as well as Canadarm2 and Dextre, the Canadian Space Agency’s family of space robots performing the heavy lifting and maintenance aboard the International Space Station. Since Nickason’s surgery in 2008, neuroArm has been used in initial clinical experience with 35 patients who were otherwise inoperable.

In the early days of the space station, astronauts were losing about one-and-a-half percent of their total bone mass density per month. Researchers discovered an opportunity to identify the mechanisms that control bones at a cellular level.

The research also is applicable to vulnerable populations on Earth, like older adults, and is important for continuous crew member residency aboard the space station and for deep space exploration to an asteroid placed in lunar orbit and on the journey to Mars.

Understanding the mechanisms of osteoporosis

While most people will never experience life in space, the benefits of studying bone and muscle loss aboard the station has the potential to touch lives here on the ground. Model organisms are non-human species with characteristics that allow them easily to be reproduced and studied in a laboratory.

Scientists conducted a study of mice in orbit to understand mechanisms of osteoporosis. This research led to availability of a pharmaceutical on Earth called Prolia® to treat people with osteoporosis, a direct benefit of pharmaceutical companies using the spaceflight opportunity available via the national lab to improve health on Earth.

Ground research indicated that certain bacteria, in particular Salmonella, might become more pathogenic (more able to cause disease) during spaceflight. Salmonella infections result in thousands of hospitalisations and hundreds of deaths annually in the United States.

While studying them in space, scientists found a pathway for bacterial pathogens to become virulent. Researchers identified the genetic pathway activating in Salmonella bacteria, allowing the increased likelihood to spread in microgravity. This research on the space station led to new studies of microbial vaccine development.

Providing students opportunities to conduct their own science in space

These types of inquiry-based projects allow students to be involved in human space exploration with the goal of stimulating their studies of science, technology, engineering and mathematics. It is understood that when students test a hypothesis on their own or compare work in a lab to what’s going on aboard the space station, they are more motivated towards math and science.

A surgical instrument inspired by the Canadian Space Agency’s heavy-lifting and maneuvering robotic arms on the space station is in clinical trials for use in patients with breast cancer. The Image-Guided Autonomous Robot (IGAR) works inside an MRI machine to help accurately identify the size and location of a tumor. Using IGAR, surgeons also will be able to perform highly dexterous, precise movements during biopsies.

Though it completed its mission in 2015, the Hyperspectral Imager for the Coastal Ocean (HICO) was an imaging sensor that helped detect water quality parameters such as water clarity, phytoplankton concentrations, light absorption and the distribution of cyanobacteria. HICO was first designed and built by the U.S. Naval Research Laboratory for the Office of Naval Research to assess water quality in the coastal ocean.

Researchers at the U.S. Environmental Protection Agency (EPA) took the data from HICO and developed a smartphone application to help determine hazardous concentrations of contaminants in water. With the space station’s regular addition of new instruments to provide a continuous platform for Earth observation, researchers will continue to build proactive environmental protection applications that benefit all life on Earth.

An imaging system aboard the station, ISS SERVIR Environmental Research and Visualisation System (ISERV), captured photographs of Earth from space for use in developing countries affected by natural disasters.

A broader joint endeavor by NASA and the U.S. Agency for International Development, known as SERVIR, works with developing nations around the world to use satellites for environmental decision-making. Images from orbit can help with rapid response efforts to floods, fires, volcanic eruptions, deforestation, harmful algal blooms and other types of natural events.

Since the station passes over more than 90% of the Earth’s populated areas every 24 hours, the ISERV system was available to provide imagery to developing nations quickly, collecting up to 1,000 images per day. Though ISERV successfully completed its mission, the space station continues to prove to be a valuable platform for Earth observation during times of disaster.

Describing the behaviour of fluids to improve medical devices 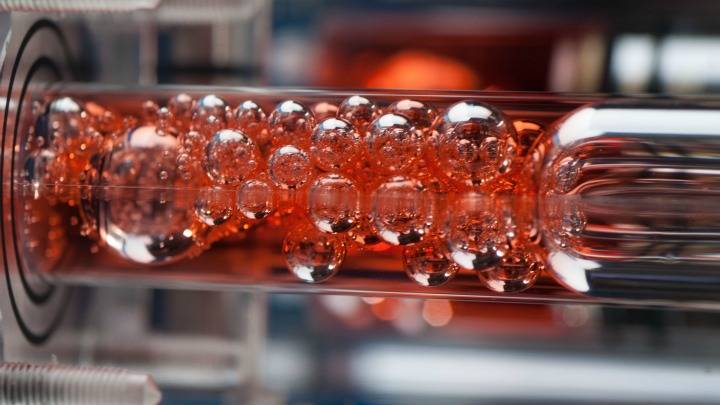 Capillary Flow Experiments (CFE) aboard the space station study the movement of a liquid along surfaces, similar to the way fluid wicks along a paper towel. These investigations produce space-based models that describe fluid behaviour in microgravity, which has led to a new medical testing device on Earth. This new device could improve diagnosis of HIV/AIDS in remote areas, thanks in part to knowledge gained from the experiments.

Solutions for growing crops in space now translates to solutions for mold prevention in wine cellars, homes and medical facilities, as well as other industries around the world.

NASA is studying crop growth aboard the space station to develop the capability for astronauts to grow their own food as part of the agency’s journey to Mars.

Scientists working on this investigation noticed that a buildup of a naturally-occurring plant hormone called ethylene was destroying plants within the confined plant growth chambers.

Researchers developed and successfully tested an ethylene removal system in space, called Advanced Astroculture (ADVASC). It helped to keep the plants alive by removing viruses, bacteria and mold from the plant growth chamber.

Scientists adapted the ADVASC system for use in air purification. Now this technology is used to prolong the shelf-life of fruits and vegetables in the grocery store, and winemakers are using it in their storage cellars.