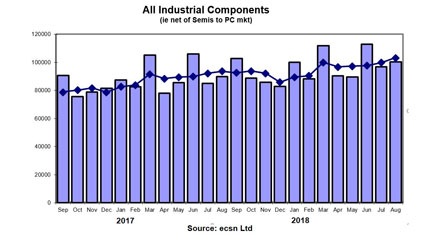 Adam Fletcher, chairman of the Electronic Components Supply Network (ecsn), has reported continuing strong revenue growth in August 2018, traditionally one of the quieter months in the year. But at the same time he acknowledged an unusual eight point fall in the B2B (book to bill) ratio.

“The decline in the B2B to 0.96.1 in August is unwelcome however I believe that we’re simply returning closer to historical reporting levels.” Fletcher said. “The polynomial trend line suggests the B2B ratio is likely to remain positive into Q4‘18”.

Fletcher believes that manufacturing output is flatlining in the UK due to weaker domestic and export demand but increasing vendor delivery times and availability of raw materials continues to be a global problem, as does rising input prices.

“BREXIT is causing a lot of uncertainty inthe UK, whilethe risk of an escalation of the trade war between the US and Chinais doing absolutely nothing positive for international markets”, Fletcher warned.

“TheSales by Month “three month moving average” for all electronic components suggests continued but slowingUK growth into Q4‘18, which is broadly in-line with historical results and forecasts”, Fletcher concluded. “There has certainly been a slight decline in customer sentiment from earlier in the year but overall the outlook for our domestic electronic components industry remains strong.”