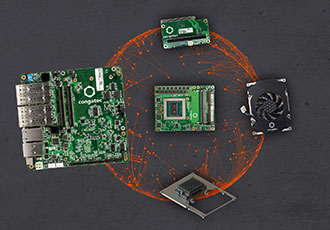 It initially targets the recently launched conga-B7E3 modules featuring three gigahertz dual-die processors of the AMD EPYC Embedded 3000 series that supports a maximum TDP of 100 Watt, up to 16 cores and 32 threads. These 100W Server-on-Modules in the COM Express Basic form factor (95x125mm) can now get equipped with new heat spreaders and heatpipe adapters for an efficient heat pipe cooling even of extremely low profile 1U servers.

By designing systems in such a way that does not use rotating fans, it is possible to develop extremely robust embedded servers that are suitable for numerous applications at the IoT/Industry 4.0 edge.

“Until today, this ecosystem was limited to a performance class of up to approximately 65W. Now, congatec has extended the capabilities of fanless designs to conduction cooled 100W systems. This enables an impressive performance boost of 53% for rugged fanless COM Express Type 7 designs.”

In addition to the new cooling solutions, the 100W ecosystem also includes starter kits with the two different application-ready server-grade carrier boards conga-X7EVAL and conga-STX7 that, among other things, execute four 10GbE interfaces, which are server-compatible with SFP+ cages for both copper and fibre optic cables.

Exemplifying edge server rack and box system designs, the kits can be modified to customer specifications. Relevant hardware engineering services for embedded edge server platforms round off the congatec 100W ecosystem for Server-on-Modules.

Notable software features of the 100W ecosystem include support for real-time configurations to avoid latencies caused by processor-side TDP management and, above all, support for the comprehensive RAS (reliability, availability and serviceability) features common to all AMD EPYC Embedded 3000 processors.

Support is also provided for IPsec with integrated crypto acceleration. As a consequence, even the server administrator does not have access to such an encrypted Virtual Machine (VM). This is very important for the high security required by many edge server services, which must enable multi-vendor applications in Industry 4.0 automation while helping ward off sabotage attempts by hackers.