Sensors and AI: the dream team 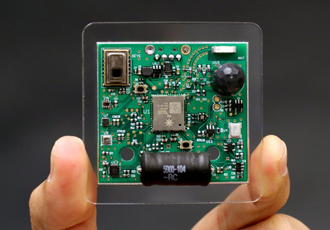 You don’t have to attach sensors to everything. With machine learning, a new suite of only nine different sensors can recognise dozens of various phenomena. Ubiquitous sensors seem almost synonymous with the Internet of Things (IoT), but some Carnegie Mellon University researchers say ubiquitous sensing - with a single, general purpose sensor for each room - may be better.

The plug-in sensor package they’ve developed monitors multiple phenomena in a room, including things such as sounds, vibration, light, heat, electromagnetic noise and temperature. With help from machine learning techniques, this suite of sensors can determine whether a faucet’s left or right spigot is running, if the microwave door is open, or how many paper towels have been dispensed.

The idea is you can plug this in and immediately turn a room into a smart environment. There is no need to go out and buy expensive smart appliances, which probably can’t talk to each other anyway, or attach sensors to everything you want to monitor, which can be both hard to maintain and ugly. You just plug it in to an outlet.

It’s an approach the researchers call 'Synthetic Sensors', because the raw feeds from the unit’s nine sensors can be combined and interpreted in ways that can sense dozens of phenomena of interest. They built their platforms with sensors used in other commonly available smart home devices — with the exception of a camera, which raises privacy concerns.

Sensor package with AI
Machine learning algorithms can combine these raw feeds into a powerful sensor package that can identify a wide range of events and objects - for instance, distinguishing between a blender, coffee grinder and mixer based on sounds and vibrations. Even soft, more subtle sounds, such as writing or erasing on a whiteboard, can be detected.

Beyond recording whether a device is in use or not, synthetic sensors can track the state of a device: whether a microwave door is open or closed, if cooking is interrupted, and whether the microwave has completed its cooking cycle.

It can not only tell you if a towel dispenser is working, but it can also keep track of how many towels have been dispensed and even order a replacement roll when necessary. A faucet left running when a room is unoccupied for a long time might prompt a warning message to the user’s smartphone.

Even more advanced sensing can infer human activity, such as when someone is sleeping, showering, watching streaming video or has left home for work. Most of this processing occurs on the sensor platform itself, so detailed and sensitive data need not be transmitted or recorded.

The sensor platform can be manually trained to recognise various phenomena, such as the cycling of water heaters or heating and air conditioning units. It also would be possible to pretrain the sensors to detect many popular devices and brands of home or office products, allowing the sensor platform to begin functioning as soon as it is plugged in.

Plugging the units into a regular electric socket eliminates the need for batteries or special wiring. As a practical matter, each room likely will need its own sensor platform, though it would be possible to have each sensor platform communicate with other nearby sensors to create a home-wide sensing environment with just a few sensors, not hundreds.