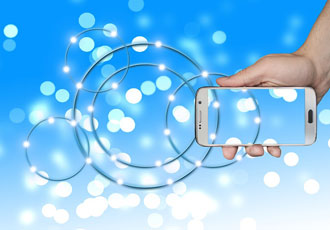 The spread of digital camera applications in vehicles, machine vision, human recognition and security systems, as well as for more powerful camera phones will drive CMOS image sensor sales to an eighth straight record-high level this year with worldwide revenues growing ten percent to $13.7bn, following a 19% surge in 2017, according to IC Insights’ 2018 O-S-D Report - A Market Analysis and Forecast for Optoelectronics, Sensors/Actuators, and Discretes. 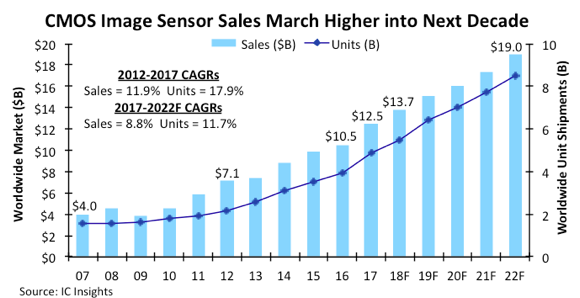 With the smartphone market maturing, sales growth in CMOS image sensors slowed to six percent in 2016, but strong demand in other imaging applications played a major factor in boosting revenues by 19% to $12.5bn last year. Sales of CCD and other image sensor technologies fell two percent in 2017 to about $1.6bn after rising five percent in 2016, according to the new IC Insights report.

In new smartphones, CMOS image sensors are also seeing a new wave of growth with the increase of dual-lens camera systems (using two sensors) for enhanced photography. Cellular camera phones accounted for 62% of CMOS image sensor sales in 2017, but that marketshare is forecast to slip to 45% in 2022.

Automotive CMOS image sensors are projected to grow the fastest among major end-use applications through the five year forecast shown in the new O-S-D Report, rising by a compound annual growth rate (CAGR) of 38.4% to about 15% of total CMOS image sensor sales in 2022 ($2.8bn) while camera phone-generated revenues are expected to rise by a CAGR of just 2.2% to $8.6bn that year.