Using programmes developed by NASA, Pennsylvania startup Narbis has introduced a revolutionary pair of glasses, which uses sensors to track the wearer's brain activity. These signals are sent to the lenses of the glasses, which darken when brain performance slips and clear when the brain is focused and concentrating.

By practicing keeping the lenses clear, users can learn how to keep their brains functioning at their best for longer and longer, and even how to shift into a state of peak performance at will. By doing just two short training sessions a week, Narbis say the brain can show a permanent improvement in overall performance.

Narbis is more than just a data gathering device, featuring exercise programmes that allow the user to to put this data to work. The glasses were designed for anyone who wants to improve their ability to achieve their goals, particularly suiting use by athletes, artists, entrepreneurs and busy parents. 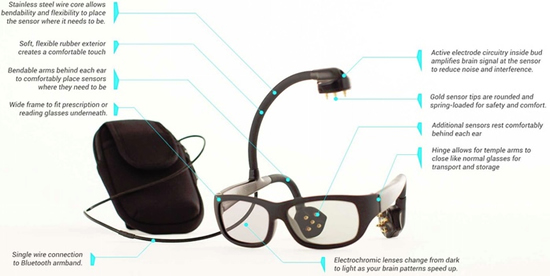 Narbis with annotated features and specifications

The headset can be connected wirelessly to the Narbis App on a smartphone, tablet or computer. Performance can be tracked over time, offering a clear system of feedback for the user. Brain activity is monitored using comfortable, gold-tipped dry sensors, which are mounted on the end of bendable arms, for a comfortable fit. The inert gold pins are attached directly to active circuitry which contains ultra high impedance, low-noise ICs. Electrochromic lenses react to electrical signals from the device, becoming lighter or darker as required. The software inside the glasses uses an adaptive threshold, maintaining an appropriate level of difficulty as skills improve.

Narbis uses Neurofeedback technology, a type of brain exercise. Neurofeedback is a training process that provides the user with positive feedback, or rewards, when the brain patterns match desired states of awareness and negative feedback, or penalties, when the patterns match undesired states. Studies have shown that Neurofeedback increases neuroplasticity (which is associated with the brain’s capacity to adapt and learn) improving the brain’s ability to form­ new con­nec­tions between brain cells, or neurons. Completing regular Neurofeedback training sessions has been shown to improve performance in everyday-life, positively impacting learning, behaviour, memory and sustained attention. 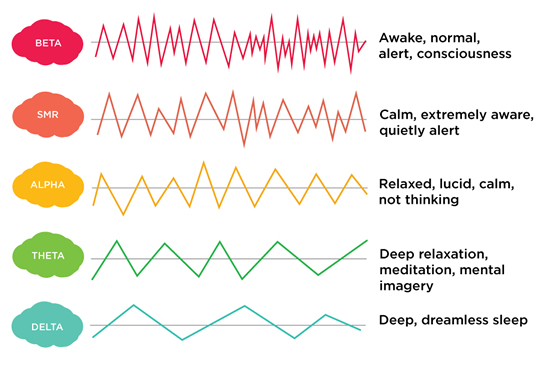 Representations of different types of brain activity, alongside a visualisation of each activity's waveform

Narbis, a battery-powered device with a life of around two hours, is not known to produce serious side-effects. If used in excess, some have reported feeling anxious, and when certain programmes are used close to bedtime, some have reported having difficulty falling asleep. However, these are not long term effects and have been easily changed when training is modified.

Narbis is particularly useful as a tool to aid the concentration of individuals who suffer from Attention Deficit Hyperactivity Disorder (ADHD). This widely-misunderstood neurological condition means that sufferers are easily distracted by unimportant or irrelevant information, making it difficult to focus on the bigger picture. Those with the condition find it difficult to concentrate on things which do not hold their interest, and are often impulsive, leading to disruptive behaviour in the classroom. Often mislabelled as simply ‘naughty’, children whose progress in school is impaired by ADHD can experience difficulties, as peers and teachers are often unprepared or unwilling to take the necessary steps to accommodate them. Narbis says that neurofeedback training using the glasses may be a simple way of improving concentration, engendering more acceptable behaviour and a more comfortable, enjoyable school experience.